Robin Brudner was hired by the Canadian Olympic Committee two years ago to drive change in its corporate culture.

The 55-year-old from Toronto will now lead the organization on an interim basis as chief executive officer.

Chris Overholt is stepping down after seven years as CEO, an abrupt departure, CBC Sports has learned, with staff being notified of his departure only hours ahead of the distribution of the news release.

He has accepted a leadership role with another organization, the COC said Wednesday in a statement, and that organization is expected to make its own announcement soon. 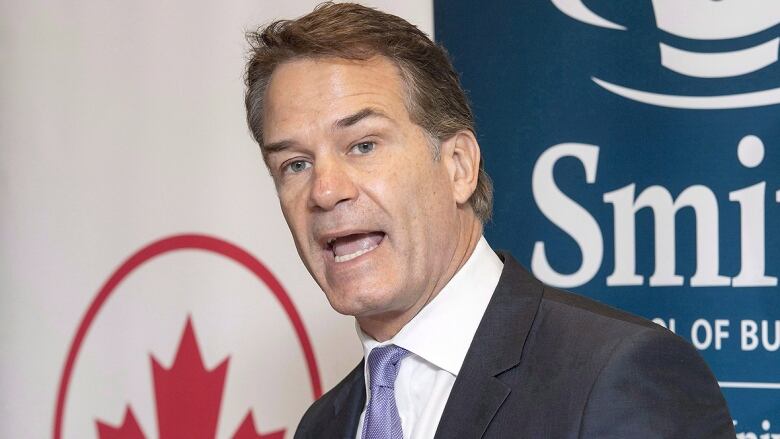 Chris Overholt is stepping down as CEO of the Canadian Olympic Committee. Under Overholt, Canada posted its best medal total at a Winter Olympics in February with 29 medals and matched the country's best performance at a non-boycotted Games with 22 medals in 2016. (Frank Gunn/Canadian Press/File)

She was the first female general counsel in the NBA and often the only woman in the boardroom while MLSE built its massive sports empire.

Brudner was the MLSE representative in the 2011 sale of the Ontario Teachers Pension Plan's majority ownership share in MLSE to Bell and Rogers, which was a $ 1.32-billion transaction.

But the COC asked her to do work she had never done before in the aftermath of president Marcel Aubut's resignation in October 2015.

He was accused of sexual harassment by several women, but did not face criminal charges and apologized in a written statement.

The hiring of a corporate secretary, Brudner, was one of several moves the COC made following a scathing independent review of the organization following Aubut's departure.

A report said senior executives knew about, and did not do enough, about harassment in the organization.

"I was hired to make recommendations to improve the governance of the COC," Brudner told The Canadian Press.

"In terms of significant changes, they would have occurred in the first year, but then you have to repeat them and you have to make sure they're ingrained in the culture.

"When I spoke to staff, I said it wasn't about bylaw change, it was about culture change."

Instituting term limits for board members was one change Brudner led at the COC, but clearly defining roles was her priority.

"The key thing was to separate proper board work from operations," she explained.

"People on staff know they have the authority and autonomy to operate the business. Because of that, people have become more empowered and they understand they are trusted to make these decisions.

"I think they trust the leadership that much more. They know it's a culture of more inclusivity, a culture of collaboration, a culture of growing the trust within the organization.

"These things really make a difference on a day-to-day basis."

Brudner has yet to decide if she'll put her name forth as a candidate for the CEO position going forward.

"The permanent position is one I will think about once we transition," Brudner said. "It's too big an opportunity for me to make that decision without really giving it consideration."

Former rower Tricia Smith was the COC vice-president who replaced Aubut. The COC is responsible for all aspects of Canada's involvement in the Olympic Games, as well as the Pan American Games.

"We went through a succession planning discipline several months ago, and in that process, Robin Brudner was identified as the most qualified and capable person to assume the CEO position should it become vacant," Smith said in the COC's statement.

"Our board reaffirmed that decision by voting unanimously to name her interim CEO and secretary general while we conduct a thorough search to permanently fill the position."

In June, the COC unanimously approved Calgary as a potential host of the 2026 Winter Games, should the city decide to go ahead with a bid.

"The bid is a huge priority for us and that will be part of the transition discussions I have with Chris," Brudner said.

Under Overholt, Canada posted its best medal total at a Winter Olympics in February with 29 medals, including 11 gold.

Canada's 22 medals, including four gold, at the 2016 Summer Games equalled the country's best performance at a non-boycotted Games.

During his tenure, the COC also instituted the Game Plan program that helps athletes transition from their competitive careers into the professional realm.

"I have had the great pleasure of knowing Robin Brudner for more than 20 years, working alongside her both at Maple Leaf Sports and Entertainment and with the Canadian Olympic Committee," Overholt said.

"She has been one of the most highly-respected and trusted executives in the Canadian sports industry for many years, playing key roles typically behind the scenes on virtually every matter that a sports organization can encounter.

"She has the unique perspective of knowing the inner workings of the office of the CEO, and of our board of directors, and that knowledge will serve her well."

Brudner has a law degree, but says sports and entertainment was always her professional ambition. Her first job in sports was a six-month contract with the then-expansion Toronto Raptors in 1995.

"I have been an Olympic junkie for as long as I can remember," she said.

"When I was a kid I would have loved to be an Olympian and to have this opportunity so many years later, to be part of the Olympic movement and to be here is pretty close to a dream come true from a professional standpoint."