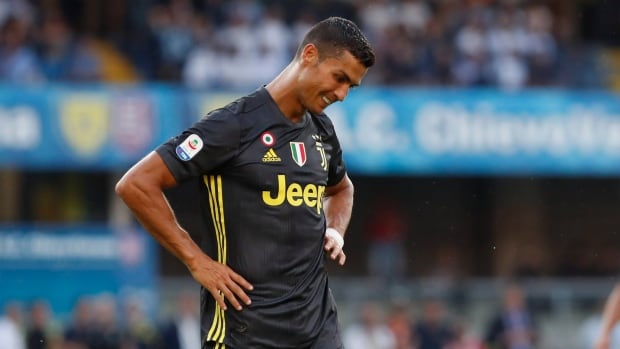 For Cristiano Ronaldo, it was "destiny" to join Juventus as he tries to become only the second player to win the Champions League with three different clubs.

Ronaldo moved from Real Madrid to Juventus in the off-season in a Serie A record 112 million euro (then $ 131.5 million US) deal.

"There are things in life that seem to be dictated by destiny and in this case it was like that," Ronaldo said in an interview with the DAZN streaming service. "I never expected to play in this team, but some things happen naturally. For me it was an easy decision, what was done in Madrid is incredible, I won everything, my family lives there, but it's part of the past. I want to try to write the story in this club."

Ronaldo failed to score on his competitive debut for Juventus, but the team still won 3-2 at Chievo Verona on Saturday.

Still, there were positive signs with Ronaldo getting a couple of chances and linking up well with his new teammates.

"I'm very happy. The team is strong and Juve, as everyone knows, is one of the best clubs in the world," Ronaldo said. "I like how they train, their mentality. They have special methods. They are very, very professional and for this reason I feel good."

Juventus has won seven straight Serie A titles and four straight league and cup doubles, but last won the Champions League in 1996. Ronaldo has won Europe's top club tournament five times, including four of the last five, and has also scored a competition record 120 goals.

The Portugal forward first won the trophy with Manchester United in 2008. Clarence Seedorf is the only player to have won it with three different clubs.

"I want to win the Champions League with Juventus," Ronaldo said. "We'll focus on that, with my teammates, but without obsessing over it. We'll go step-by-step and then we'll see if it's this year, next year or the year after that."

Another Champions League win would also see him join Francisco "Paco" Gento as players to have won Europe's elite club competition a record six times. Gento did it between 1956 and 1966.

Ronaldo scored one of the best goals in Champions League history last season against Juventus in Turin — a spectacular overhead goal which earned him a standing ovation from the Italian team's fans.

And the 33-year-old admitted that played a part in his decision to move to Turin.

"The small details make the big difference at the end of the day so I would say what I saw in the stadium helped, to be honest," Ronaldo said. "[It] was, in my opinion, the best goal in my career so far. And, of course, when the people start to applaud me in the stadium I was like, 'Wow.'

"[It] surprised me a lot because this has never happened in my life, so was unbelievable moment."