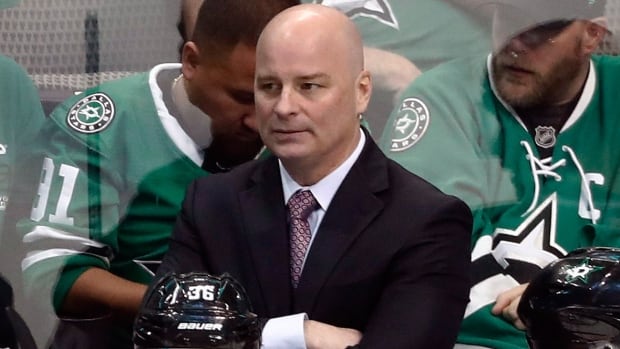 The Dallas Stars on Tuesday dismissed second-year head coach Jim Montgomery due to “unprofessional conduct inconsistent with the core values and beliefs of the Dallas Stars and the National Hockey League.”

Nill said he became aware Sunday of an act by Montgomery and that the decision to relieve the coach of his duties came after an internal investigation that included discussions with the team’s general counsel. While not going into detail, Nill said it was not a criminal act, and had no connection to present or past players.

Nill, who hired Montgomery, called the incident a “total surprise.”

Assistant coach Rick Bowness, who was brought aboard a month after Montgomery’s hiring in May 2018, has been named interim coach.

“The Dallas Stars expect all of our employees to act with integrity and exhibit professional behaviour while working for and representing our organization,” Nill said in a news release.

Dallas is fourth in the Central Division with a 17-11-3 record and holds the top wild-card playoff spot in the Western Conference after a 1-7-1 start to the season.

Montgomery departs Dallas with a 60-43-10 regular-season mark. He guided the Stars to their first Stanley Cup playoff berth in three seasons last spring, and watched the team lose Game 7 of a second-round series to the eventual Cup champion St. Louis Blues.

‘We will not tolerate abusive behaviour’: Bettman

Before his hiring in Dallas, Montgomery was 125-57-26 the previous five seasons at the University of Denver, including a national title in 2016-17. As a player, he was part of a national championship at Maine in 1993.

On Monday, NHL commissioner Gary Bettman said the league would work swiftly to make changes to better deal with personnel conduct issues in the wake of incidents that surfaced in recent weeks.

“Our message is unequivocal: We will not tolerate abusive behaviour of any kind,” Bettman told reporters at the end of the first day of the board of governors meeting in Pebble Beach, Calif.

Montgomery’s firing is not related to that kind of misbehaviour, a person familiar with the situation told The Associated Press on condition of anonymity because the team had not elaborated on the reason for Montgomery’s dismissal.

Bettman also made it clear there would be zero tolerance from the league moving forward.

On Nov. 29, Bill Peters resigned as Calgary Flames head coach amid allegations of racial slurs and physical abuse of players in previous jobs.

A few days earlier, former NHL player Akim Aliu alleged Peters directed racial slurs toward him while they were both employed by the Rockford IceHogs of the American Hockey League in the 2009-10 season.

“We don’t like surprises,” Bettman said. “The Bill Peters situation was a complete surprise.”

Head coach Mike Babcock was also accused of verbal abuse after he was fired recently by the Toronto Maple Leafs.

Last week, Chicago Blackhawks assistant coach Marc Crawford was put on leave while the team investigates allegations of physical abuse made against him by two other former players.

Bowness, 64, has spent more than 40 years in the NHL as a player and coach.

The Halifax native has been a head coach in Winnipeg, Boston, Ottawa, Phoenix (now Arizona) and with the New York Islanders, and compiled a record of 123-289-51. His last head coaching stint lasted 20 games with the Coyotes in 2003-04.

In 2015, Bowness reached the 2,000-game plateau as a head coach and assistant/associate coach in Tampa Bay, where he passed the legendary Scotty Bowman for most games coached in the NHL.