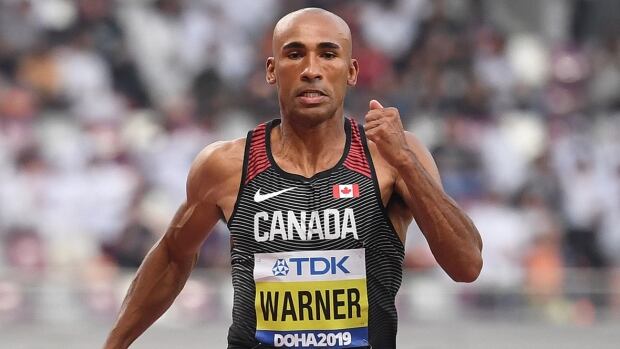 A monster 16.82-metre throw by defending world champion Kevin Mayer in Wednesday’s shot put allowed the Frenchman to overtake Canada’s Damian Warner for top spot after three events of the men’s decathlon at the track and field world championships.

Mayer stood third before shot put, 90 points back of leader Pierce LePage of Toronto and 63 in arrears of world No. 1 Warner.

While Mayer’s 16.82 effort was recorded as a personal best, he actually threw 17.08 at a triathlon. His first attempt on Wednesday in Doha, Qatar, measured 15.69.

Warner, who battled a bone spur in his left ankle to repeat as Pan Am champion in August, wasn’t in top form early in the two-day world decathlon.

Damian Warner won his second career Pan Am gold medal in the decathlon. 0:30
The 2016 Olympic bronze medallist appeared to flinch coming out of the starting blocks of the 100 metres but still clocked a winning time of 10.35 seconds to edge LePage by 1-100th of a second to earn 1,011 points.

LePage topped the field in long jump at 7.79 metres while Warner recovered from a no jump in his first try to leap 7.67 in his third and final attempt. Mayer came in at 7.56.

Warner also started slowly in shot put with a first throw of 13.66, well short of his 15.34 PB recorded on May 25 in Gotzis, Austria, where the 29-year-old won his fifth Hypo Meeting with a year world-leading 8,711 points.

But Warner recovered to throw 14.97 on his third attempt to close to withing 40 centimetres of his PB.

LePage’s throw of 13.21 was 21st of 22 competitors and dropped him three spots in the overall standings.