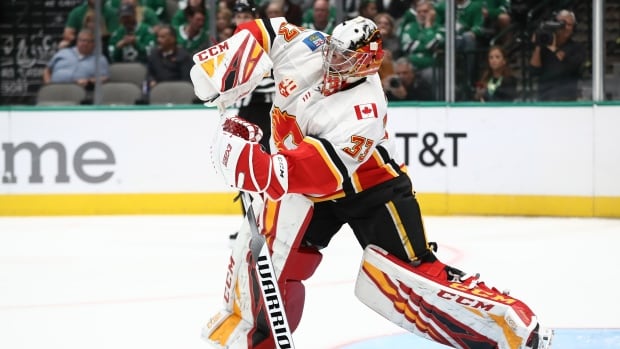 Masochistic is one way to describe a peculiar game-day routine of Calgary Flames netminder David Rittich.

“After every morning skate, before he gets off the ice, we go to the sideboards,” says goalie coach Jordan Sigalet. “I have to shoot two pucks off his head. Sometimes, it takes me five, six, even seven times. But until I get him in the head twice, he’s not getting off.

“So a little bit of pressure on me, but I think I’m pretty good at it at this point.”

For Sigalet, accuracy is a good thing given his burgeoning No. 1 goalie also has other matters that need attending.

As part of a commitment to improve his fitness, Rittich is cutting back on sugar — he only allows himself cans of Coca-Cola on game days.

“One after the pre-game skate and one before the game,” the Czech goaltender says firmly. “And that’s it.”

The Flames aren’t about to complain about the idiosyncrasies of the 27-year-old. With the departure of veteran Mike Smith to Edmonton, Calgary badly needs Rittich to step up and lay claim to the starting job, with former Oiler Cam Talbot expected to serve as the back-up.

Vegas Golden Knights netminder Marc-Andre Fleury (180) is the only goalie in the NHL to have faced more shots than Rittich (171) this season. Through four games, Rittich was the undeniable team MVP with a .929 save percentage behind a (shockingly) leaky defence.

David Rittich made 34 saves and Johnny Gaudreau had a goal and 2 assists in the Calgary Flames 3-0 victory over the Vancouver Canucks. 0:58

“Ritter, he’s such a fun guy,” says defenceman Travis Hamonic. “You guys don’t see it, but he’s talking a lot on the ice. He’s cool, calm, collected in there. He’s cracking some jokes in the middle of the play, things like that. He’s obviously a really fun guy to play in front of. He battles tremendously hard in there.”

On Saturday in Las Vegas, Rittich battled the puck in a 6-2 loss to the Golden Knights. Two shots (by Paul Stastny and Ryan Reeves) squeaked through his pads. Vegas forward Mark Stone swatted home a questionable rebound.

By the end of the night, Rittich’s record dropped to 2-2-1 and his save percentage dipped to .906.

“Most of the time, I really like his style,” says John Garrett, a retired NHL  goaltender and game analyst for Sportsnet in Vancouver. “He stays square. The one area where he sometimes gets himself in trouble is that he lets out rebounds because he feels he can stop the next one — instead of containing rebounds so you don’t have to stop the next one.”

Fiery and emotional — much like his favourite player Patrick Roy — Rittich slammed his stick on the crossbar in disgust on Saturday night.

“You’re always going to get some good footage if you have the camera on David, for sure,” Sigalet says. “He’s always doing something like rubbing the posts when they make a save for him. Goalies are superstitious. They have their quirks, and he has a few of them.”

Kasperi Kapanen had a penalty that left fans scratching their heads, Rob Pizzo looks at 9 more. 1:55

The Flames stumbled on  Rittich four years back when director of pro personnel Derek MacKinnon took in a game between Czech elite teams Sparta Praha and BK Mlada Boleslav. MacKinnon was there to size up Sparta forward Daniel Pribyl, but he couldn’t keep his eyes off the scrappy netminder on the other side.

Rittich’s skating immediately stood out. The 6-foot-3, 206-pounder is so strong on his edges that he’s never really out of a play.

Knowing hardly a lick of English, Rittich joined the Stockton Heat of the American Hockey League in 2016-17.

“He told the other Czech guy on the team to only speak English to him, and he told me he watched a lot of TV shows and movies with subtitles on to try to learn that way,” Sigalet says. “The first year, one day he hurt his knee, and he came and told me he hurt his ‘k-nee.’

“With little things like that, you could make fun of him and he just got better and better at the language. He wanted to learn.”

Wildly popular in the locker room, Rittich has carried his teammates for much of this young season. Should the Flames start playing up to their potential — especially on the back end — all signs point to Rittich firmly establishing himself as the legitimate No. 1 in Calgary.

“As a D-man, you want to play in front of people like that,” Hamonic says. “He’s such a competitive guy.”