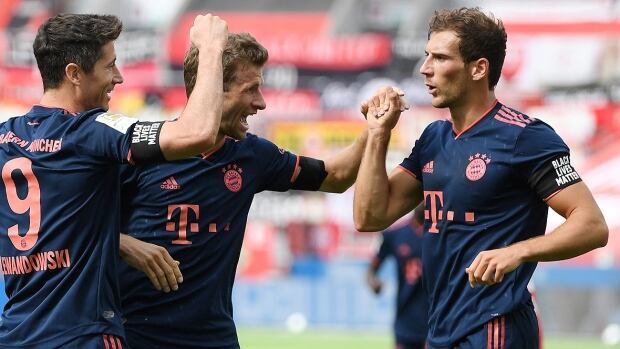 Wearing “Black Lives Matter” armbands, Bayern Munich came from a goal down to beat Bayer Leverkusen 4-2 and take another step towards a record-extending eighth consecutive Bundesliga title on Saturday.

Robert Lewandowski scored Bayern’s fourth to claim his 30th goal of the season, set up by Thomas Muller, who now has 20 assists. However, both players were booked in the first half and will miss the next game against Borussia Monchengladbach due to an accumulation of yellow cards.

Leverkusen’s players also wore black armbands as thousands of people across Germany attended anti-racism demonstrations in the wake of the police killing of George Floyd, a handcuffed black man, in Minneapolis on May 25.

The speed of Canadian international Alphonso Davies, who started in his usual left fullback position, and French international Kingsley Coman down the flank caused Leverkusen problems.

Davies’ pace drew two fouls that led to Leverkusen yellow cards in the first half. He also cut out a dangerous cross in his own penalty box in the 34th minute.

The 19-year-old former Vancouver Whitecap found himself up against 17-year-old Florian Wirtz as Leverkusen as one of three substitutes to open the second half. It marked Wirtz’s fourth league appearance.

Early in the second half, Davies used his wheels to cut out a passing lane to a Leverkusen attacker in front of goal and force a shot from a bad angle that was off-target. In the 51st minute, he snuffed out another attack by dispossessing a Leverkusen player on the edge of the Bayern penalty box.

Four minutes later, Davies was in the right place at the right time as a goal-bound header by Leverkusen’s Argentine forward Lucas Alario bounced off his back and into touch.

Davies made a trademark run down the left flank in the 61st minute only to see Coman’s touch let him down in front of goal.

Davies won the battle of teenagers in the 82nd minute, stealing the ball off Wirtz on the flank to launch another attack.

Davies, who like his teammates wore a Black Lives Matters armband, came off in the 85th minute. He was replaced by Lucas Hernandez, the 80-million-euro ($ 121 million US) club-record signing he is helping keep on the bench.

Bayern’s players warmed up wearing anti-racism T-shirts in Leverkusen, where the home team had to do without young star Kai Havertz due to muscular problems.

It also had to do without fans, as all Bundesliga games are being played without supporters amid strict hygiene measures against coronavirus.

Leverkusen striker Lucas Alario opened the scoring in the ninth minute, staying cool to beat Manuel Neuer at the near post with the outside of his boot. The linesman lifted his flag for offside, but the goal was given after a VAR check.

The home side played well until Leon Goretzka set up Kingsley Coman to equalize in the 27th, then scored himself on a counterattack in the 42nd.

There was still time before the break for Serge Gnabry to grab Bayern’s third, lifting the ball over ‘keeper Lukas Hradecky.

Though his side had played well for the first half hour, Leverkusen coach Peter Bosz reacted with three changes at the break.

But another defensive mistake preceded Lewandowski’s goal in the 66th, a powerful header from Muller’s perfectly-placed cross.

The 17-year-old Florian Wirtz restored some pride for Leverkusen with a brilliant finish past Neuer in the 89th. He became the youngest goal-scorer in the Bundesliga.

Also, last-place Paderborn claimed a 1-1 draw at 10-man Leipzig, Mainz defeated Eintracht Frankfurt 2-0 away in their derby and Fortuna Dusseldorf drew with Hoffenheim 2-2.