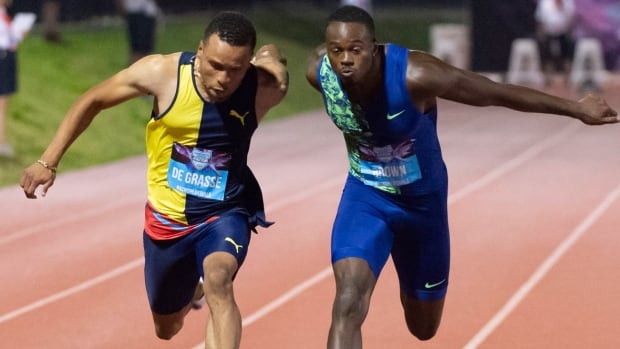 They may not speak on a daily or weekly basis, but Aaron Brown says he’s friends with fellow Canadian sprinter Andre De Grasse. They grew up together in Toronto, share the same goals on the track and a year ago were preparing to battle for bragging rights in the same fantasy basketball league.

“There’s a little bit of trash talk with that,” Brown, the reigning national champion in the 100 and 200 metres, told CBC Sports back in the spring. “We’re not going to get into specifics because I didn’t do so well. Neither one of us made the playoffs.”

Brown and De Grasse, who already boasts a bronze medal at this year’s track and field world championships, hope their luck changes when they go head-to-head in Tuesday’s 200 final at 3:40 p.m. ET in Doha, Qatar.

Tuesday afternoon will mark the first time two Canadians share the track in a world 200 final after De Grasse and Brown made similar history in the 100 on the weekend.

“Oh, yeah, that’s great,” De Grasse told CBC Sports’ Scott Russell when asked if having Brown in the 200 final mattered to him. “Two Canadians in the 200-metre final … that feels pretty good. We’re going to bring our ‘A’ game and hopefully both of us will get on the [medal] podium.”

With a healthy lead in his semifinal heat, De Grasse slowed before crossing the line in 20.08 seconds on Monday to qualify fifth for the eight-man final at Khalifa International Stadium. Brown ran 20.20 in the first of three heats and had to wait before learning he qualified seventh.

The little moments when you line up against each other [in the 100 or 200 metres] you definitely want to take each other’s head off. We’re enemies for those 10 or 20 seconds.— Aaron Brown on going head-to-head with fellow Canadian Andre De Grasse

Brown said he and De Grasse, whom he recruited to attend the University of Southern California a few years back, want to do well for their country. De Grasse won three medals in his 2016 Olympic debut, including silver in the 200, while Brown won 4×100 relay bronze with De Grasse at those Summer Games in Rio.

Canada’s Andre De Grasse finishes 1st in his semifinal with a time of 20.08. 2:04
“It’s like being friends with your brother on the track,” Brown said of running against De Grasse. “You don’t want to beat anybody more than your brother. You want to have the bragging rights.

“We’re cool and good friends off the track but the little moments when you line up against each other [in the 100 or 200], you definitely want to take each other’s head off. We’re enemies for those 10 or 20 seconds.”

De Grasse gained the upper hand in Saturday’s 100 final as Brown was eighth, giving the Markham, Ont., sprinter a 2-1 edge in the event this season. Entering Tuesday, De Grasse also holds a 2-1 advantage for 2019 in the 200, with a third-place finish to Brown’s fourth at the Sept. 6 Diamond League Final their most recent head-to-head meeting.

CBC Sports analyst Donovan Bailey said De Grasse is running smart and loves the confidence and swagger he has shown in Doha after being hampered by hamstring injuries in 2017 and 2018. The 24-year-old has raced a combined six times in a world championship or Olympic final and won six medals.

“There are certain athletes that peak at the highest level,” said Bailey, who won Olympic gold in the 100 in 1996. “I loved the highest level and competition and Andre seems to have taken a page out of my book here.”

Bailey added it will be interesting to watch the last 50 metres of Tuesday’s final to see if gold-medal favourite Noah Lyles of the United States “can hold on” and win gold because “Andre’s going to be coming.”

Bailey noted Brown appears tentative out of the starting blocks and off the corner in the 200 while noting the 27-year-old did relax in the final metres on Monday.

“He has to potentially jump out in front [of the field] coming out of the blocks [on Tuesday] and hopefully run a way better corner than [Monday and in Sunday’s heats],” said Bailey.

Canada’s Aaron Brown reflects on his performance in the 200m semifinals. 0:46

Lyles, the three-time reigning Diamond League champion and 2019 U.S. gold medallist in the 200, ran into a slight headwind to post a season world-leading 19.50 in Lausanne, Switzerland, on July 5 and went 19.86 in Monday’s semifinal heats.

Noah Lyles is the 4th fastest man to run the 200 metres after running a time of 19.50 in the Diamond League event from Lausanne. 2:54

In February, the 22-year-old decided to focus solely on the 200 at world championships in hopes of shattering sprint legend Usain Bolt’s 19.19 world record in Doha.

Fellow American Christian Coleman pulled out of Sunday’s 200 preliminaries with body soreness after setting a 9.76 personal best in the 100. Coleman, who could return for the 4×100, is ranked 12th in the world in the 200.

Reigning 200 world champion Ramil Guliyev of Turkey is a medal contender Tuesday along with Alex Quinonez of Ecuador, the only man besides Lyles to dip under 20 seconds in the semifinal heats at 19.95. The 30-year-old has four victories this season, including a Pan Am title, and 10 podium finishes in 13 races.

“Not a lot of people are talking about him,” Bailey said of Quinonez. “This is his first time in the big show as a medal contender. He’s been consistent all year and ran a pretty good semifinal with Lyles.”

CBC Sports has exclusive live coverage of the 2019 World Track & Field Championships from Sept. 27-Oct. 6. Visit the stream and broadcast schedule, You can also add the complete event schedule to your calendar.