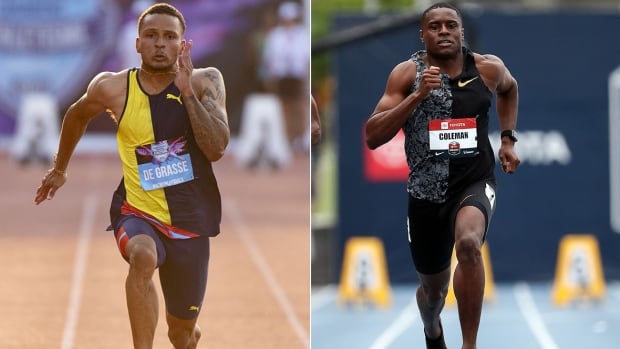 Watching Christian Coleman burst out of the blocks at London Stadium and hold a two-metre lead over world-record holder Usain Bolt in the first half of the men’s 100 at the 2017 world track and field championships was an eye-opener for Andre De Grasse.

The Markham, Ont., sprinter and 2016 Olympic triple medallist had been ruled out of the race a few days earlier after straining his right hamstring during a training run.

“I don’t want to give up two or three metres in the first 30 or 40 metres,” De Grasse says of the world championships in Doha, Qatar, where he and Coleman are slated to go head-to-head in the 100 for the first time since the 2015 NCAA semifinals on Saturday. “I want to be in the mix [early on], keep my form and finish strong.”

De Grasse is brimming with confidence following a 9.97-second season-best performance at the Berlin World Challenge on Sept. 1.

“All year my starts have been shaky and I haven’t been able to get out with the field,” says the 24-year-old, “but I was able to get out of the blocks [well in Berlin] and maintain my speed.

“I’ve been working on that phase and that race was an indication that it’s coming along. I just have to be patient and when I hear the [starter’s] gun just react and push … and I’ll be in the mix.”

Former world-record holder Donovan Bailey believes De Grasse has the potential to reach the podium “and even win” in Doha. He remembers using the Diamond League circuit to see how he compared to Frankie Fredericks and Ato Boldon, who were superior out of the blocks in the 100.

“Andre has tremendous top speed and can do the same with Coleman,” Bailey says. “You have to take advantage of athletes that are better than you at some parts of the race where you might need work.”

De Grasse says he will use the heat and semifinal rounds in Doha “to see where I’m at.” The semifinals are scheduled for Saturday and will be live streamed on CBCSports.ca at 11:45 a.m. ET and the final at 3:15 p.m.

WATCH | The story of De Grasse and Coleman:

Despite following similar paths in their careers, Canada’s Andre De Grasse and American Christian Coleman have yet to race each other professionally in the 100 metres.. CBC Sports’ Anson Henry sets up the much-anticipated 100-metre showdown at the upcoming track and field worlds. 1:38
He’ll face a well-rested Coleman, who hasn’t run the 100 since winning in 9.99 in late July at the U.S. championships. A month later, he was charged with a potential anti-doping rule violation for failing to properly file his whereabouts information, but the U.S. Anti-Doping Agency eventually dropped his case for missed doping tests because of a technicality.

Bailey says Coleman’s return to the track will test him psychologically and wonders if the recent events have opened the window of opportunity for the rest of the field.

De Grasse and Coleman were supposed to race the 100 at the Muller Grand Prix Diamond League event on Aug. 18 in Birmingham, U.K. but the American withdrew “as a result of complications occurring after practice this week.”

The whole field is going to be great and I think any of us can win. I can’t just focus on Christian.— Canadian sprinter Andre De Grasse on the men’s 100 metres at world championships

A scheduled matchup between the two in May 2018 in Shanghai was cancelled when Coleman, the world-record holder in the indoor 60 metres, withdrew from the event due to a hamstring injury. Another showdown was scuttled two months later after De Grasse’s season was cut short by a second hamstring injury.

“The whole field is going to be great and I think any of us can win,” says De Grasse of this weekend’s race. “I can’t just focus on Christian but [rather] myself and make sure I’m executing the race.”

In that 2015 race, De Grasse won the 100 and 200 in Eugene, Ore., while representing the University of Southern California and Coleman — then a University of Tennessee freshman — failed to qualify for the 100 final.

But the 23-year-old Atlanta native has since made huge strides, capturing the 100 and 200 at 2017 NCAAs, winning a world silver medal later that year and posting a 2019 world-leading time of 9.81 seconds at the Diamond League’s Prefontaine Classic on June 30.

Christian Coleman ran a 9.81 in the men’s 100-metre race at the IAAF Diamond League event at Stanford University. 4:21
Still, De Grasse has Coleman’s number to this point, also passing him in the final 10 metres of the 200 on a wet track to clock a season-best 19.91 two months ago at the Golden Spike meet in Ostrava, Czech Republic. Coleman was second in 19.97.

“Christian has such velocity coming out of the blocks but tends to stay in it after he reaches his speed threshold,” says Bailey. “It’s as though he’s still trying to drive at 80 metres instead of relaxing when the speed generated through 60 metres should be able to carry you.

“I like Andre’s race because he tends to relax the longer the race. Christian has to relax at 70 metres, breathe and decelerate a lot less than he has been.”

Said De Grasse: “To run 9.97 going into the world championship, I feel I’m getting my confidence back and have a good chance to get back on the podium.”

From Donovan Bailey, to Perdita Felicien, to Andre De Grasse, Canada has had flashes of glory at the track and field world championships. 3:03