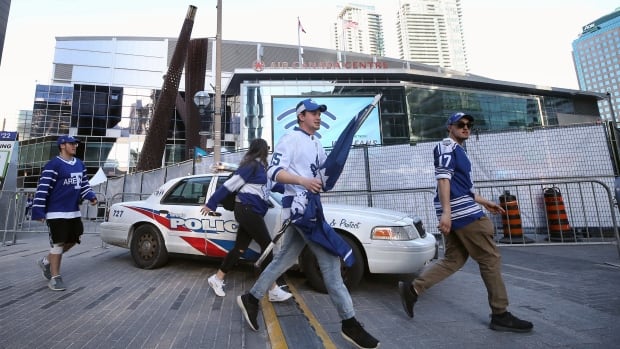 Roads are closed around the Air Canada Centre and there will be more security inside the arena for Monday’s NHL playoff game between the Maple Leafs and Bruins in response to a deadly incident involving a van and pedestrians in north Toronto.

Maple Leaf Sports and Entertainment issued a release announcing the additional security measures hours after a van mounted a sidewalk and struck multiple people on a busy stretch of Yonge Street between Finch Avenue and Sheppard Avenue. Police say nine people died and 16 others were sent to hospital.

MLSE did not provide details on what the extra security inside the arena entailed.

Some 90 minutes before the opening faceoff, there was a heavy police presence around the rink and concrete slabs had been placed at a major intersection to block access to the sidewalk.

Fans attending games at the arena are already required to pass through a metal detector before games, and bags allowed into ACC can be no larger than 14-by-14-by-6 inches, smaller than an average backpack.

In addition to those watching the game inside the arena, a sizable crowd is expected to assemble outside in Maple Leaf Square. Numbers

The release did not say if the same measures will be in place for Wednesday’s NBA playoff game between the Toronto Raptors and the Washington Wizards.