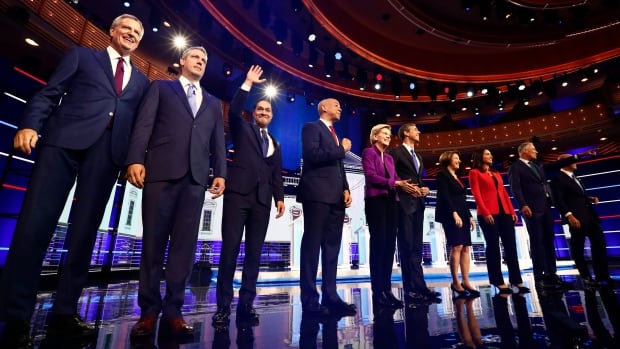 The first of two debates between 20 of the 24 Democratic candidates in the 2020 U.S. presidential race kicked off tonight in Miami with 10 candidates, including three senators, a mayor and several current or former members of Congress.

Sen. Elizabeth Warren started off by answering a question about her policy-driven campaign and how it may affect what is seen as a good economy.

“Who is this economy really working for?” she said. “It’s doing great for a thinner and thinner slice at the top.”

The Massachusetts senator says the economy is working well for “giant oil companies” and those who want to invest in private prisons, but not for those struggling and Americans facing the effects of climate change.

Watch as Warren vows to take on PACs:

Sen. Elizabeth Warren says she would go after the big fundraisers who carry so much power in Washington. 0:41

Trying to differentiate himself from the rest of the large field, former Texas rep. Beto O’Rourke showed off his fluent Spanish while answering his first question.

O’Rourke said in English that “this economy has got to work for everyone” and right now, it isn’t. Then he switched to Spanish, saying in that language that “we need to include everyone” in a booming national economy.

O’Rourke, who hails from the Texas-Mexico border city of El Paso, spoke in Spanish at length, then switched back to English. He said the Trump administration has focused on helping the wealthy and large corporations over everyday Americans — echoing similar sentiments of the other Democrats on stage.

As for U.S. President Donald Trump himself, spent the beginning of first Democratic debate greeting service members at Alaska’s Elmendorf Air Force Base.

As the debate was starting Wednesday, Trump told troops: “I had my choice between you and them. And I chose you.”

Trump is on his way to Japan for the G20 summit.

But Trump was clearly the focus of many of the candidates. Every one decried the Trump administration’s immigration policies, saying the president is to blame for the deaths of an immigrant father and his toddler daughter found lying face-down after drowning in the Rio Grande.

Castro called the photo “heartbreaking” and said it “should piss us all off.” He also attacked O’Rourke for not supporting fully decriminalizing the act of crossing the U.S.-Mexico border illegally.

New Jersey Sen. Cory Booker talks about what he would do day one to improve immigration laws in the U.S., spurring a passionate reaction from Julian Castro. 1:39

On Iran, Sen. Cory Booker was alone in calling it a “mistake” for the U.S. to sign onto the 2015 nuclear accord with Tehran, a position that puts him in agreement with Trump.

The New Jersey senator was the only one of the 10 candidates on stage in Miami not to raise his hand when asked if he supported the deal. Under the agreement, Iran agreed to limit its enrichment of uranium and submit to UN inspections in exchange for the lifting of economic sanctions.

Pressed to explain his rationale, Booker said as president he would “do the best I can to secure this country.”

After asking for a show of hands from Democrats on who supports the 2015 Iran deal, Sen. Cory Booker has to explain his sole unraised hand. 0:54

Trump pulled the United States out of the accord in May 2018 and has imposed increasingly tough sanctions to pressure Iran into a better deal. The U.S. has threatened sanctions against countries that trade with Iran.

For many of these White House hopefuls, Wednesday’s debate will be the highest-profile opportunity yet to offer their vision for the country. While the crowded field has been courting voters in key states for several months already, the vast majority of the nation has yet to pay close attention to the diverse field.

Earlier in the day, Trump confirmed that he would watch the debate from Air Force One.

Things got personal when the moderators began to ask the candidates about gun control.

De Blasio talked about raising a black son and trying to keep him safe, including from police.

Warren said the toughest questions she’s gotten on the campaign trail are from kids who ask how she’d keep them safe. Warren says the U.S. should “double-down” on research into what works to reduce gun violence.

And O’Rourke talked about how he would approach Republicans who think the Democrats would simply take away their guns.

Former Texas Rep. Beto O’Rourke on what he would tell Republicans who fear the Democracts would take away their guns. 1:16

One of the most passionate exchanges came toward the end of the two hours, when the candidates were asked why the United States is still in Afghanistan.

Hawaii Rep. Tulsi Gabbard, a U.S. Army National Guard veteran who did two tours in the Middle East, was not impressed with Ohio Rep. Tim Ryan’s position on the issue.

The debate is split over two nights, with 10 other candidates — including former vice-president Joe Biden and Vermont Sen. Bernie Sanders — appearing Thursday.