U.S. lawmakers waited on Sunday for details of a confidential report into a probe of Russian meddling in the 2016 election that has cast a pall over President Donald Trump's time in office and raised questions about possible collusion between the Republican's campaign and Moscow.

U.S. Attorney General William Barr was expected to give Congress and the public a summary of the report by Special Counsel Robert Mueller who has conducted a 22-month-long Russia investigation.

Barr, the top U.S. law enforcement official, spent nine hours on Saturday studying the report. He had said he hoped to hand over a summary of its "principal conclusions" by the end of the weekend.

There appeared to be initial good news for Trump and his inner circle, as Mueller did not bring any further indictments when handing over the report to Barr on Friday.

That signals there might be no more criminal charges against Trump associates on the issue of whether the Trump campaign conspired with Russia to help ensure the Republican businessman's surprise election win against Democrat Hillary Clinton.

It was not immediately known what Mueller's report says about another strand of inquiry: whether Trump committed obstruction of justice to hinder the Russia investigation by acts such as firing then FBI Director James Comey in 2017.

Mueller brought charges against 34 people and three companies during his investigation, with prison sentences for some of Trump's ex-aides such as former campaign chairman Paul Manafort and former personal lawyer Michael Cohen.

None of those charges, however, directly related to the question of collusion between the campaign and Moscow. Mueller, a former FBI director, did not interview Trump in person for his probe. Instead, Trump sent written answers to some questions about contacts with Russia.

U.S. intelligence agencies concluded shortly before Trump took office in January 2017 that Moscow meddled in the election with a campaign of email hacking and online propaganda aimed at sowing discord in the United States, hurting Clinton and helping Trump.

Trump, at his Mar-a-Lago, Fla., resort for the weekend, remained uncharacteristically silent about the completion of the investigation.

He has frequently derided Mueller's work as a "witch hunt" and denies collaborating with Moscow or obstructing justice. Russia says it did not interfere in the election. 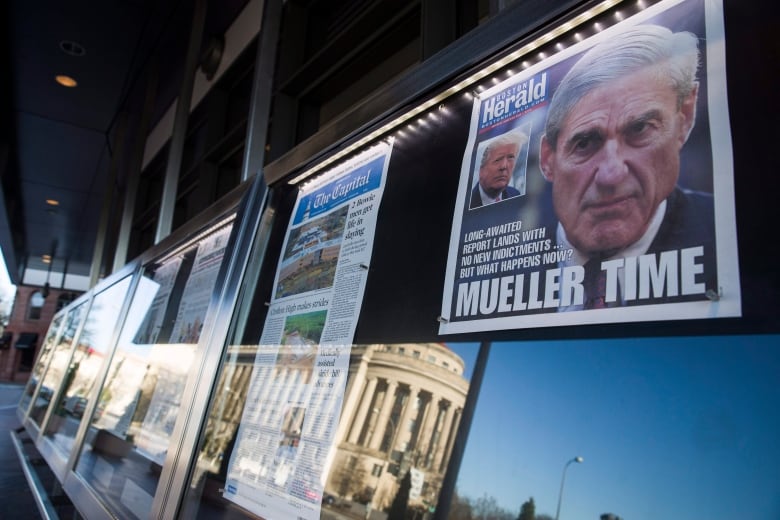 Newspaper front pages from around the U.S. are on display at the Newseum on Saturday in Washington. (Alex Brandon/Associated Press)

Spokesman Hogan Gidley told reporters that the White House still has not received or been briefed on Mueller's report.

The president took part in no public events on Saturday and played golf with musician Kid Rock.

House Democrats have asked for the release of the full Mueller report, as well as other documents backing up its conclusions, and have threatened to issue subpoenas if necessary.

Trump and his core team still face legal risks even if the report does not find that they committed crimes, and congressional Democrats on Saturday vowed to keep looking into his activities. 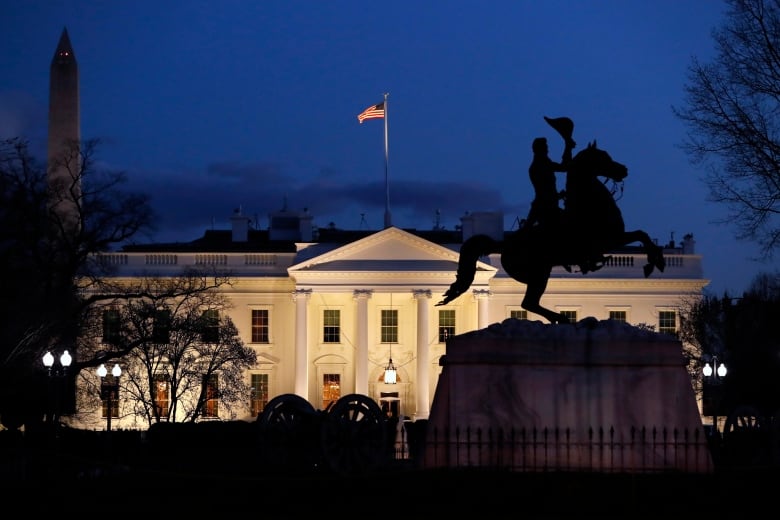 The White House is seen at dusk on Friday, after Mueller delivered his final report to Attorney Barr, who is reviewing it. (Jacquelyn Martin/Associated Press)

Other prosecutors have picked up strands of the Mueller probe, most notably the U.S. Attorney's Office for the Southern District of New York which is looking into Trump's business practices and financial dealings.

Under Department of Justice regulations, Barr is empowered to decide how much to disclose of the Mueller report publicly. He is a Trump appointee who only took office in February after the president fired his predecessor, Jeff Sessions.

Barr, who first served as attorney general in the early 1990s under President George H.W. Bush, told lawmakers on Friday that he is "committed to as much transparency as possible."