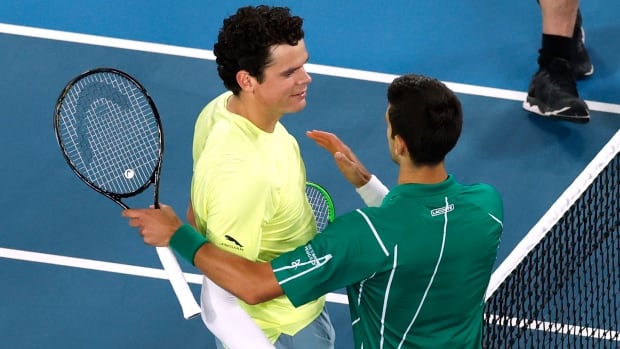 “Him, all the other top guys as well, once they sort of can get into a groove, get their balance behind them, things get more difficult,” Raonic said. “He was in a lot of my service games. I was sort of holding on. But eventually at one point, he found an opening.

“I think I needed to execute a little bit better, maybe go in with a different approach.”

Novak Djokovic denied Canadian Milos Raonic a spot in the quarter-finals at the Australian Open, defeating him in straight sets 6-4, 6-3, 7-6 (1). 1:12

Raonic, 29, hadn’t lost a set in four previous matches at the tournament before running into Djokovic, who is known as one of the sport’s top service returners.

The hard-serving Canadian had 18 aces, while Djokovic had just four. But Djokovic still had a better percentage of points won when getting the first serve in, converting on 69 per cent of his chances as compared to Raonic’s 63 per-cent clip.

“You feel it not because it comes back necessarily quicker, but the fact is that he gets his racket on a lot of returns,” Raonic said. “That’s the part. He just makes you play more and more.

“Obviously on the second-serve return, he does have a much better return than most of the rest of the tour. But on the first serve, you feel it because he just gets his hand on it.”

Raonic had only two break-point chances, and couldn’t convert on either. Djokovic was 2-for-16 on break points.

Raonic was well ahead in unforced errors, making 48 to Djokovic’s 14. That was a bigger gap than in winners, which Raonic led 48-29.

It was Raonic’s fifth run to the quarter-finals or better at the Australian Open in the past six years. It came after a second half of a 2019 season in which Raonic missed large portions of time due to a back injury.

“Overall, a lot of positive things for me this week,” Raonic said. “I think that’s where my focus is at.”

Djokovic, despite having issues with his contact lenses in the third set, is now two wins away from defending his Australian Open crown.

The Serbian next plays six-time Australian Open winner Roger Federer, who saved seven match points before fending off 100th-ranked Tennys Sandgren in five sets. Djokovic has never lost a semifinal or final he has contested at Melbourne Park.

Djokovic, who has won the season’s first Grand Slam seven times, paid tribute to a man he has called his mentor —Kobe Bryant — after the match. The former Los Angeles Lakers star, his daughter Gigi and seven others died in a helicopter crash Sunday.

When he signed the camera after the win (a tennis tradition), Djokovic wrote “KB 8 24 Gigi. Love you,” referring to Bryant’s two jersey numbers.

“It’s really sad,” Djokovic said. “His daughter is 13 years old. I don’t know what to say, to be honest. I’m sorry. I’m heartbroken, honestly, with what has happened.”

Federer pulls off another miracle win

After pulling off a miracle victory against American world No. 100 Tennys Sandgren by saving seven match points, Roger Federer remained optimistic about recovering fully from a groin problem in time for Thursday’s clash with Djokovic.

The Swiss third seed scripted a nerve-wracking 6-3 2-6 2-6 7-6(8) 6-3 comeback victory on Rod Laver Arena on Tuesday to continue his bid for a record-equalling seventh title at the Melbourne Park.

Federer called the trainer to the court during the third set against Sandgren and then took a lengthy medical timeout that he later said was for a problem with his groin.

His movement was visibly impaired for the rest of the match but that did not stop the 38-year-old from reaching a record-extending 15th semi-final at the Australian Open.

Next up for the 20-times Grand Slam winner will be Novak Djokovic, who last year beat Rafa Nadal in the final to claim a seventh title at the Melbourne major.

“I don’t know if you can call it an injury. It’s just pain and problems. I need to figure it out now,” he said. “But as it’s not like in 18 hours, like you got a third round to play, semi-finals, you have an extra day, adrenaline, there’s a lot of things. Two good nights of sleep, doctors, physios.

“Hopefully we’ll find out that it’s actually nothing bad, that it was just the groin that went really tight from playing a lot, who knows what, from nerves. I don’t know. I’m hopeful.”

Just prior to the medical timeout, Federer was warned for obscene language – something that is rare for the Swiss – after a complaint from a line judge.

He first confronted the line judge before getting involved in an argument with Serbian chair umpire Marijana Veljovic. Federer said he found the warning “bit tough” but accepted it.

Asked if the language was not English, Federer said with a smile: “It was a mix. Clearly she speaks mixed. Didn’t know that [smiling]. Next time I got to check the lines-people.”

While Federer did not feel as physically exhausted as he did against John Millman, when he won six straight points from 8-4 down in the final set tiebreaker to stay alive, Sandgren had nothing left in the tank — both physically and emotionally.

If watching match points slip by was not hurtful enough for Sandgren, he also had to deal with some physical pain when a ball girl accidentally ran her knee into his calf during changeover in the fourth-set tiebreak.

“That was physically painful. She was apologetic and everything. Accidents happen, so that wasn’t a big deal,” he said. “It stung a little bit at the time. It didn’t bother me when the point started, no.”

Meanwhile, Canadian Gabriela Dabrowski and partner Jelena Ostapenko of Latvia have been ousted from women’s doubles.

The No. 4 Czech duo of Barbora Krejcikova and Katerina Siniakova toppled No. 6 Dabrowski and Ostapenko 3-6, 6-2, 6-3 on Tuesday in the quarterfinals.

It’s the second time in three years that Dabrowski has reached the quarters of women’s doubles in Melbourne only to come up just short.

The 27-year-old from Ottawa isn’t finished at the Grand Slam, however.

Dabrowski is still alive in the mixed doubles with partner Henri Kontinen of Finland. The No. 3 seeds beat Australia’s Matthew Ebden and Jessica Moore 7-5, 7-6 (5) in a second-round match on Tuesday.