The Toronto Raptors didn’t need a superhuman performance from Kawhi Leonard on Tuesday.

After shouldering the load through the first four games of this playoff series, Leonard got plenty of help from his teammates in Game 5. And now the Raptors are one win away from a berth in the Eastern Conference final after their biggest playoff victory in history — a 125-89 rout over the Philadelphia 76ers that has Toronto up 3-2 in their best-of-seven series.

“I think tonight was one of those games where we let him rest a little bit, which is important,” said all-star guard Kyle Lowry. “He didn’t have to do everything offensively. Those are the things that we need to do as a team to continue to get better.”

Leonard, who’d been brilliant in scoring 152 points through the first four games, had 21 points and a team-high 13 rebounds.

Toronto beats Philadelphia 125-89 for their largest win in post-season history. 2:11

Pascal Siakam led the way with 25 points, showing no signs of the calf contusion he suffered in Game 3. Lowry had 19 points, while Danny Green had five three-pointers and 17 points for the Raptors, who pulled away with a big second quarter and led by as many as 40 points.

Rounding out the six Raptors in double figures: Marc Gasol chipped in with 11 points for Toronto, while Serge Ibaka had 10 points, despite playing most of the game with three stitches and an egg on his forehead, thanks to an errant Leonard elbow.

The Raptors — who are a win away from just their second conference final appearance in franchise history (their first was in 2016) — were back on home court after splitting their two games in Philly, bouncing back from a 116-95 rout in Game 3 to beat the Sixers 101-96 in Game 4, one of the biggest wins in franchise history.

While Leonard didn’t have the offensive firepower of the previous four games, his teammates more than pulled their weight — and the result was an offence that was flowing nicely.

“We’re a team,” Siakam said. “All year, that’s what we’ve done. Kawhi’s an amazing player, and when there’s nights where he’s going the way he’s going, and he’s scoring 40, and shooting fadeaways, and making all those shots, it’s kind of amazing to see.

“But at the same time, we know we’re a team, and we always have each other’s back.”

WATCH | Serge Ibaka gets stitched up after elbow to head:

Serge Ibaka is bleeding from his head due to an elbow Kawhi Leonard. Ibaka would get 3 stitches then return to the game. 1:01

Jimmy Butler had 22 points for the Sixers, while Joel Embiid, whose status had been questionable earlier in the day due to an upper respiratory infection, finished with 13.

Leading by a point after one quarter, the Raptors pulled away in the second, outscoring Philadelphia by 20 points in the period. And by the time Gasol drilled a three-pointer with 1:29 left in the third, the lead had grown to 24.

Leonard put the punctuation mark on the thrashing with a monster rim-hanging dunk over Embiid — the ball bouncing off both Embiid’s nose and head — to end the third quarter. The Raptors led 92-70 with one quarter left.

Toronto kept its figurative foot on Philly’s throat through the fourth, going up by 31 points on a Gasol three-pointer with 10:02 to play. And when Embiid checked out of the game with just under nine minutes left, hundreds of fans — and Drake — made like airplanes, mocking the Cameroon player’s showboating in Game 3.

Embiid told Drake as he walked to the bench that the Sixers would be back Sunday for a Game 7. Game 6 is Thursday in Philadelphia.

According to Philly coach Brett Brown, Embiid had spent most of the previous two days in bed, missing both practice and film sessions.

“It affects it, but none of us are gonna use that as an excuse,” the coach said. “You know, he was trying to do whatever he could to represent his organization and play basketball for the Philadelphia 76ers.” 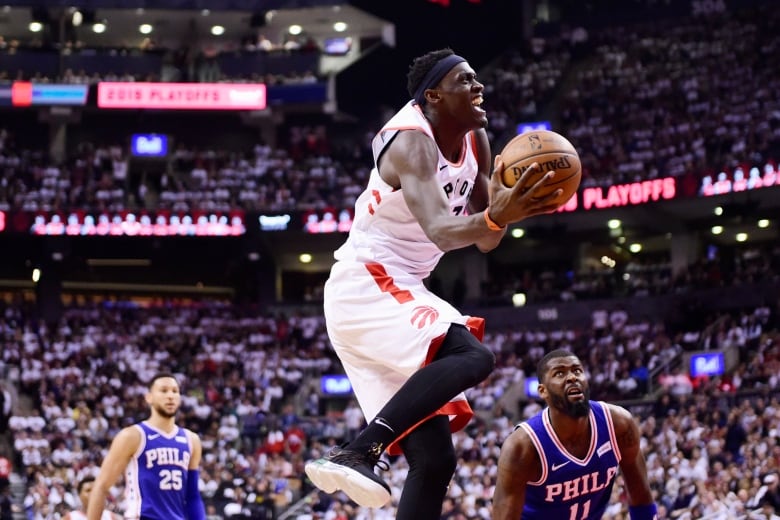 Pascal Siakam scores two of his 25 points in the Raptors’ win on Tuesday. (Frank Gunn/Canadian Press)

The huge lead allowed Nick Nurse to sit Leonard and Siakam with seven-and-a-half minutes to play. Lowry and Gasol left the game a minute later. All four were serenaded off the court with standing ovations from the Scotiabank Arena crowd that included Drake, Julius (Dr. J) Erving, and Maple Leafs winger Mitch Marner.

Like he did in Game 4, Nurse used Ibaka and Gasol together in stretches.

“They’re being good together,” Lowry said. “They’re out on the floor talking Spanish. We don’t understand what they’re saying, but whatever they’re doing, they got to keep it up. But just being big and being athletic and being strong, we need that.”

The Raptors forced 19 Philly turnovers for 31 points, and outscored the Sixers 33-8 on fast-break points.

“That number of points in transition, 33, and you look at 31 points off turnovers, that is haunting,” Brown said. “You cannot win with those types of numbers.”

The Raptors, who climbed to No. 1 in three-point shooting after they acquired Gasol at the trade deadline, shot 16-for-39 from three-point range for 41 per cent. The Sixers made just six of their 22 three-point attempts.

Trailing by seven early on, the Raptors went on a 14-1 run capped by a Leonard running dunk to put Toronto up by four points late in the third quarter. Butler was fouled on a three-point attempt with half a second on the clock, and his three free throws cut the Raptors lead to 27-26 heading into the second.

Ibaka returned with bandaged head to start the second quarter, and showed no fear from the whack to his head, scoring on a driving dunk early in the frame. It set the stage for an excellent quarter that saw Green connect on all three of his three-pointers, and six Raptors score. With the clock ticking down, Leonard drove between Harris and James Ennis for a massive dunk with 2.6 seconds on the clock.

The Scotiabank Arena crowd chanted “M-V-P!” as the Raptors headed for the locker-room up 64-43 at halftime.