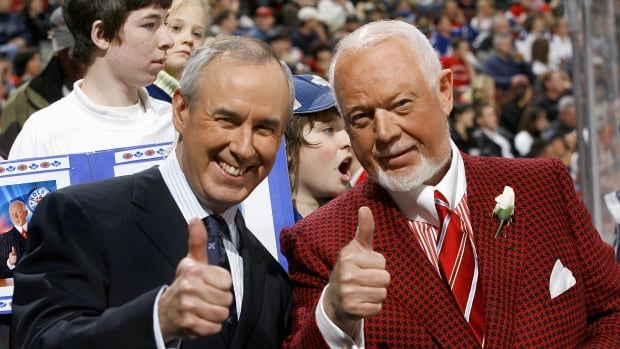 The colourful host of Coach’s Corner on Hockey Night in Canada says he was told by his bosses shortly after the NHL playoffs he’d return next season.

Since 1986, Cherry has appeared on Coach’s Corner with long-time sidekick Ron MacLean.

1) I must say I am hurt and disappointed that my friend Steve Simmons would suggest in his Sunday column that Hockey Night in Canada might not want me back for next year. I was told a week after the playoffs I would be back.

Cherry, 85, has become popular with fans for his eccentric suits and often candid slant on all things hockey.

But the former Boston Bruins and Colorado Rockies head coach was the bane of the Carolina Hurricanes and their fans last season when he called the team “a bunch of jerks” in response to the players doing their “Storm Surge” celebrations at centre ice when they raised their sticks to salute their supporters following home victories.