A federal appeals court panel has ruled that U.S. President Donald Trump once again exceeded the scope of his authority with his latest travel ban.

But the judges on the 9th U.S. Circuit Court of Appeals put their decision on hold pending review by the U.S. Supreme Court, meaning the ban involving six majority Muslim countries will remain in effect.

The 77-page ruling released late Friday says Trump’s proclamation makes no finding whatsoever that simply being from one of the countries cited in the ban makes someone a security risk.

Hawaii, which is suing to stop the ban, has argued that it will be harmful because families will be separated and university recruitment will be hampered.

Earlier this month, the Supreme Court lifted temporary lower court orders that had prevented the latest ban from taking effect.

The status quo was maintained when the 9th Circuit stayed its decision, said Carl Tobias, a professor at the University of Richmond School of Law. 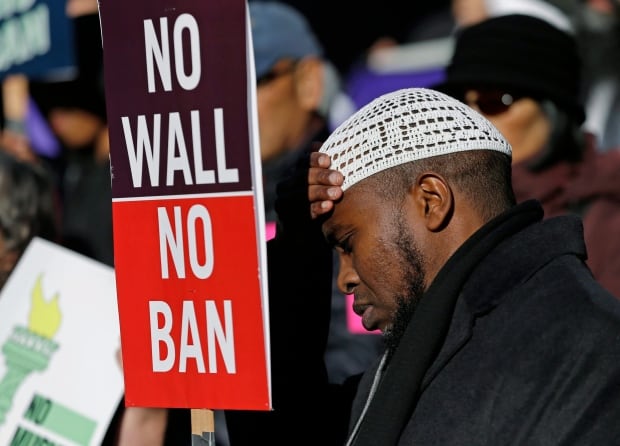 Abdirahman “OJ” Mohamed of Seattle holds a sign during a protest on Dec. 6, 2017, outside the federal courthouse in Seattle. (Ted S. Warren/Associated Press)

The ruling was unusual, but it’s a unique case, he said, noting the Supreme Court has not set argument dates because it has not yet decided to grant an appeal.

“Given the shockingly rapid volley of executive actions and court decisions, this is surely just the latest in a long series of battles to come,” said Mary Fan, a University of Washington law school professor.

‘The order should be allowed’

The judges focused on whether Trump had made a required finding that the entry of people affected by the ban would be detrimental to U.S. interests.

Under U.S. immigration law, such a determination must be made before barring 150 million potential travellers from Chad, Iran, Libya, Somalia, Syria and Yemen, they said.

Department of Justice spokesperson Lauren Ehrsam said the agency is pleased that the Supreme Court has already allowed the government to implement the proclamation and keep Americans safe while the matter is litigated.

“We continue to believe that the order should be allowed to take effect in its entirety,” Ehrsam said.

In a September proclamation, Trump said the ban was needed because the countries don’t do a good job of verifying or sharing information about their citizens, and thus the government “lacks sufficient information to assess the risks they pose to the United States.”

Trump relies on the premise that the Immigration and Nationality Act gives him broad powers to regulate immigration, the judges said. But for the president to block entry, he must first legally prove that person’s entry would be detrimental to the interests of the United States.

“National security alone is not a ‘talismanic incantation’ that once invoked, can support any and all exercise of executive power under” immigration law, the decision said.

Hawaii Attorney General Doug Chin said in a statement Friday that he has “always believed that the rule of law, reinforced by Hawaii’s values, will win the day. Make no mistake: our values of diversity and inclusion are America’s values, and they will light the way even through our darkest of hours.”

Noah Purcell, the solicitor general for the Washington state Attorney General’s Office who argued that state’s challenge to Trump’s first travel ban, was pleased with the 9th Circuit opinion.

“This ruling again confirms that the president has gone far beyond the immigration powers that he has, and has ignored the law in issuing this discriminatory order,” Purcell said.

A separate challenge, brought by civil liberties groups, is pending in the 4th Circuit Court of Appeals in Richmond, Va., which also heard arguments this month. 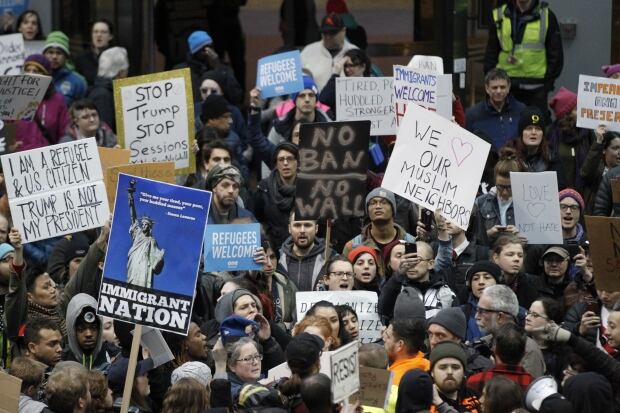 Citing national security concerns, Trump announced his initial travel ban on citizens of certain Muslim-majority nations in late January, bringing havoc and protests to airports around the country. A federal judge in Seattle soon blocked it, and courts since then have wrestled with the restrictions as the administration has rewritten them.

The latest version blocks travellers from the listed countries to varying degrees, allowing for students from some of the countries while blocking other business travellers and tourists, and allowing for admissions on a case-by-case basis.

It also blocks travel by North Koreans along with some Venezuelan government officials and their families, although those parts of the restrictions are not at issue in the courts.