American actress and singer Doris Day, whose wholesome screen presence stood for a time of innocence in 1960s films, has died, her foundation says. She was 97.

She was surrounded by close friends and “had been in excellent physical health for her age, until recently contracting a serious case of pneumonia,” the foundation says in an emailed statement.

With her lilting contralto, wholesome blond beauty and glowing smile, she was a top box office draw and recording artist known for such films as Pillow Talk and That Touch of Mink, and songs including Whatever Will Be, Will Be (Que Sera, Sera) from the Alfred Hitchcock film The Man Who Knew Too Much. 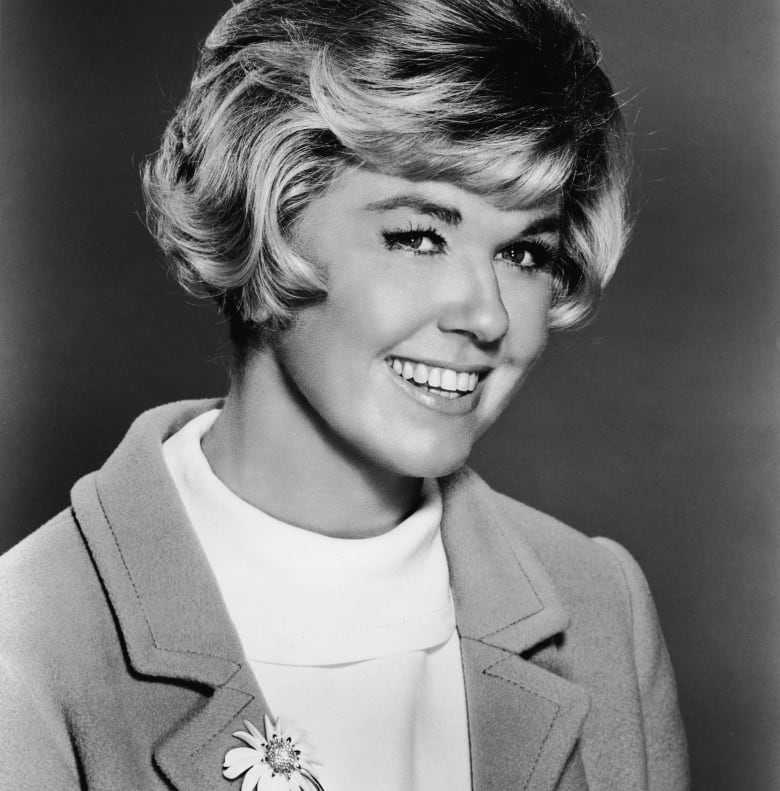 Day was known for her wholesome image and films such films as Pillow Talk and That Touch of Mink. (Hulton Archive/Getty Images)

But over time, she became more than a name above the title: Right down to her cheerful, alliterative stage name, she stood for a time of innocence and G-rated love, a parallel world to her contemporary Marilyn Monroe. The running joke, attributed to both Groucho Marx and actor-composer Oscar Levant, was that they had known Day “before she was a virgin.”

Day herself was no Doris Day, by choice and by hard luck.

In Pillow Talk, released in 1959 and her first of three films with Rock Hudson, she proudly caught up with what she called “the contemporary in me.” Her 1976 tell-all book, Doris Day: Her Own Story, chronicled her money troubles and three failed marriages, contrasting with the happy publicity of her Hollywood career. 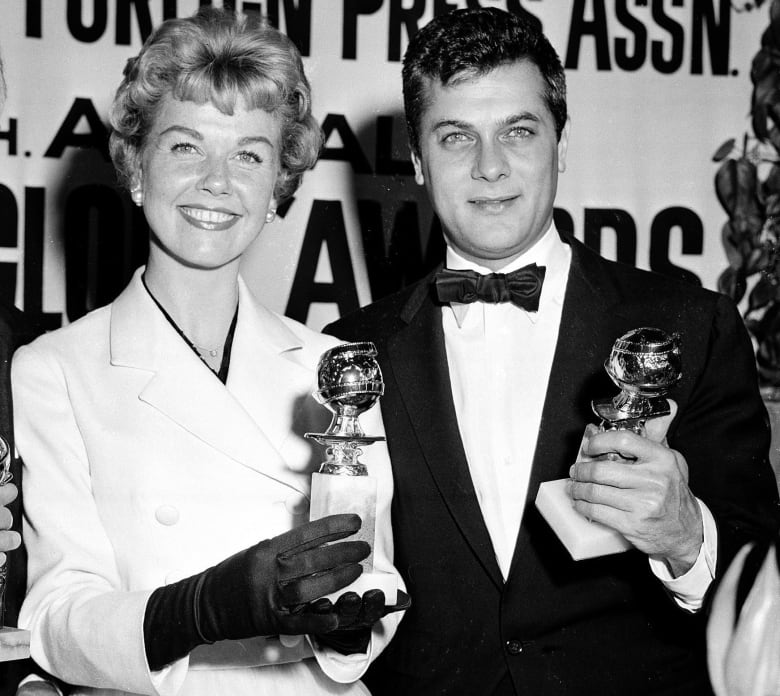 Day and Tony Curtis in 1958 at a gala dinner in Los Angeles after winning awards for best actress and actor presented by the Hollywood Foreign Press Association. (The Associated Press)

“I have the unfortunate reputation of being Miss Goody Two-Shoes, America’s Virgin, and all that, so I’m afraid it’s going to shock some people for me to say this, but I staunchly believe no two people should get married until they have lived together,” she wrote.

She never won an Academy Award, but Day was given a U.S. Presidential Medal of Freedom in 2004, as George W. Bush declared it “a good day for America when Doris Marianne von Kappelhoff of Evanston, Ohio, decided to become an entertainer.”

In recent years, she spent much of her time advocating for animal rights. Although mostly retired from show business since the 1980s, she still had enough of a following that a 2011 collection of previously unreleased songs, My Heart, hit the top 10 in the United Kingdom.

The same year, she received a lifetime achievement honour from the Los Angeles Film Critics Association. Friends and supporters lobbied for years to get her an honorary Oscar.

Started as a singer

Born to a music teacher and a housewife, she had dreamed of a dance career, but at age 12, she suffered a crippling accident: a car she was in was hit by a train and her leg was badly broken. Listening to the radio while recuperating, she began singing along with Ella Fitzgerald, “trying to catch the subtle ways she shaded her voice, the casual yet clean way she sang the words.”

Day began singing in a Cincinnati radio station, then a local nightclub, then in New York. A bandleader changed her name to Day, after the song Day after Day, to fit it on a marquee. 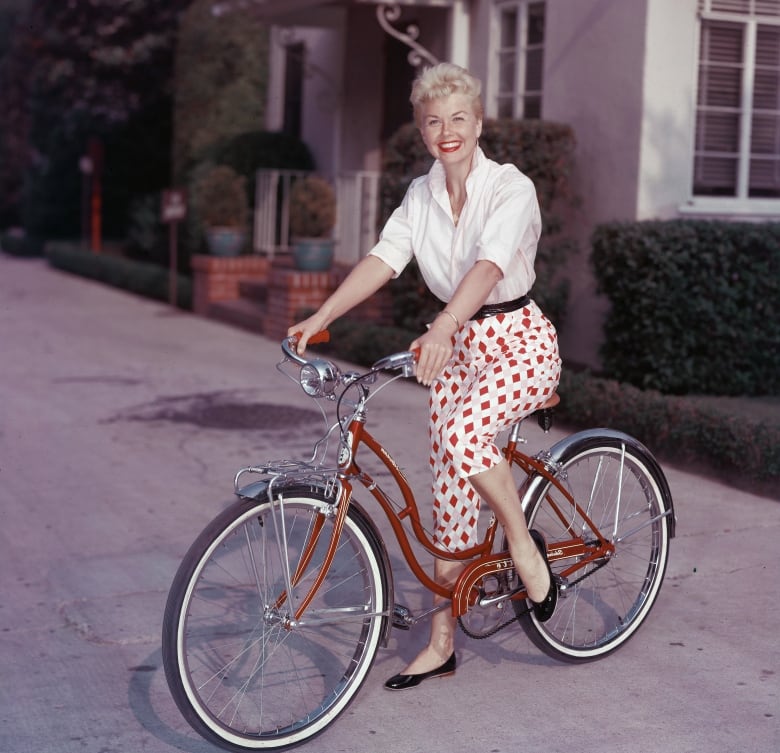 Day on a red Schwinn bicycle in the late 1950s. (Hulton Archive/Getty Images)

A marriage at 17 to trombonist Al Jorden ended when, she said, he beat her when she was eight months pregnant. She gave birth to her son, Terry Melcher, in early 1942. Her second marriage also was short-lived. She returned to Les Brown’s band after the first marriage broke up.

Her Hollywood career began after she sang at a Hollywood party in 1947.

After early stardom as a band singer and a stint at Warner Bros., Day won the best notices of her career with Love Me or Leave Me, the story of songstress Ruth Etting and her gangster husband-manager. She initially balked at it, but the 1955 film became a box-office and critical success.

She followed with another impressive film, Hitchcock’s The Man Who Knew Too Much, also starring James Stewart as an innocent couple ensnared in an international assassination plot. She sings Que Sera, Sera just as the story reaches its climax, and viewers are beside themselves with suspense. The 1958 comedy Teacher’s Pet paired her with an aging Clark Gable as an idealistic college journalism teacher and her student, an old-school newspaper editor.

But she found her greatest success in slick, stylish sex comedies, beginning with her Oscar-nominated role in Pillow Talk. She and Hudson were two New Yorkers who shared a telephone party line and initially hated each other.

She followed with The Thrill of It All, playing a housewife who gains fame as a TV pitch woman to the chagrin of obstetrician husband James Garner. The nation’s theatre owners voted her the top moneymaking star in 1960, 1962, 1963 and 1964.

Her first musical hit was the 1945 smash Sentimental Journey when she was barely in her 20s. Among the other songs she made famous were Everybody Loves a Lover, Secret Love, and It’s Magic, a song from Romance on the High Seas, her first film.

The blonde actress talks to CBC upon the release of her 1962 picture That Touch of Mink. 5:18

Romance on the High Seas had been designed for Judy Garland, then Betty Hutton. Both bowed out and Day, recommended by songwriters Sammy Cahn and Jule Styne, won the role. Warner Bros. cashed in on its new star with a series of musicals, including My Dream Is Yours, Tea for Two and Lullaby of Broadway. Her dramas included Young Man with a Horn, with Kirk Douglas and Lauren Bacall, and Storm Warning, with Ronald Reagan and Ginger Rogers. 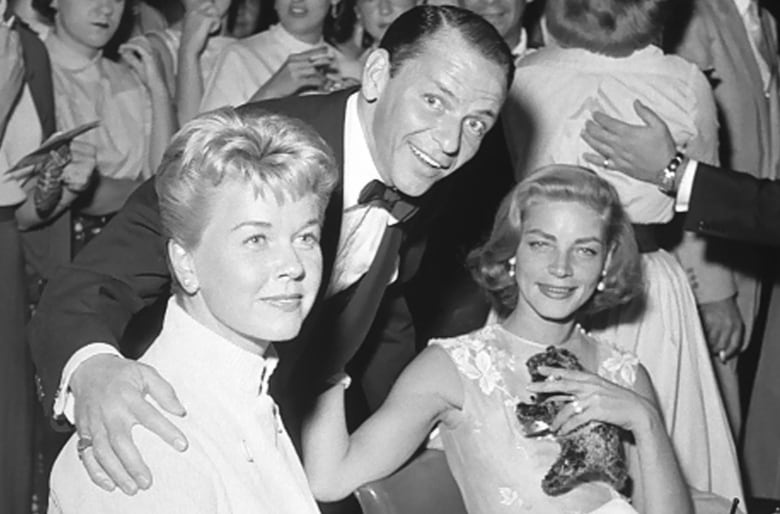 Her last film was With Six You Get Eggroll, a 1968 comedy about a widow and a widower and the problems they have when blending their families.

With movies trending for more explicit sex, she turned to television to recoup her finances. The Doris Day Show was a moderate success in its 1966-1973 run on CBS.

Disillusionment grew in the 1960s when she discovered that failed investments by her third husband, Martin Melcher, left her deeply in debt. She eventually won a multimillion-dollar judgment against their lawyer. 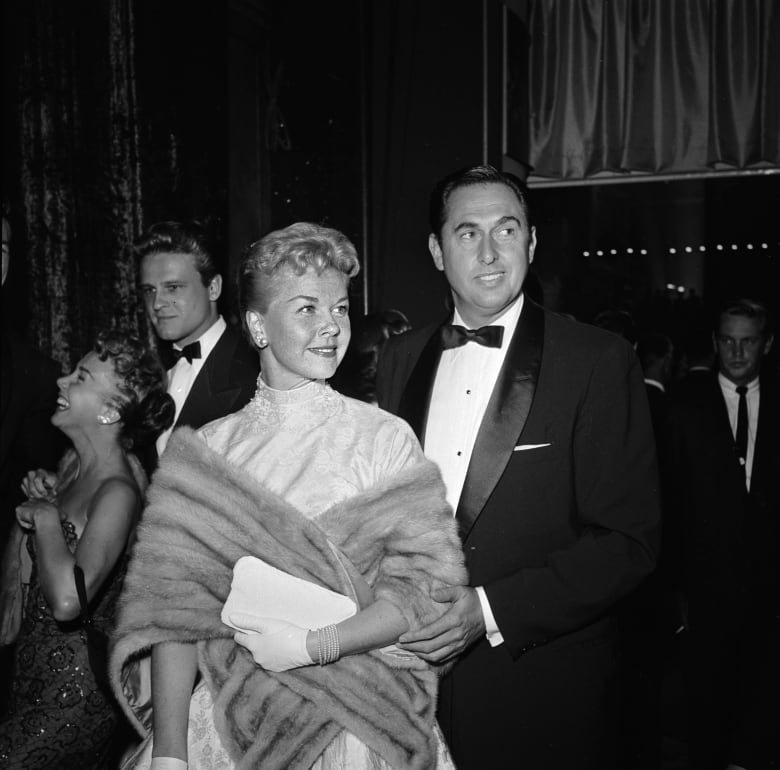 She had married Melcher, who worked in her agent’s office, in 1951. He became her manager, and her son took his name. In most of the films following Pillow Talk, Martin Melcher was listed as co-producer. Melcher died in 1969.

In her autobiography, Day recalled her son Terry telling her the $ 20 million US she had earned had vanished and she owed around $ 450,000, mostly for taxes.

In 1974, Day won a $ 22.8-million judgment against Jerome B. Rosenthal, her lawyer and business manager, for mishandling of her and Melcher’s assets.

Terry, who died in 2004, became a songwriter and record producer, working with such stars as the Beach Boys. But he was also famous for an aspiring musician he turned down, Charles Manson. 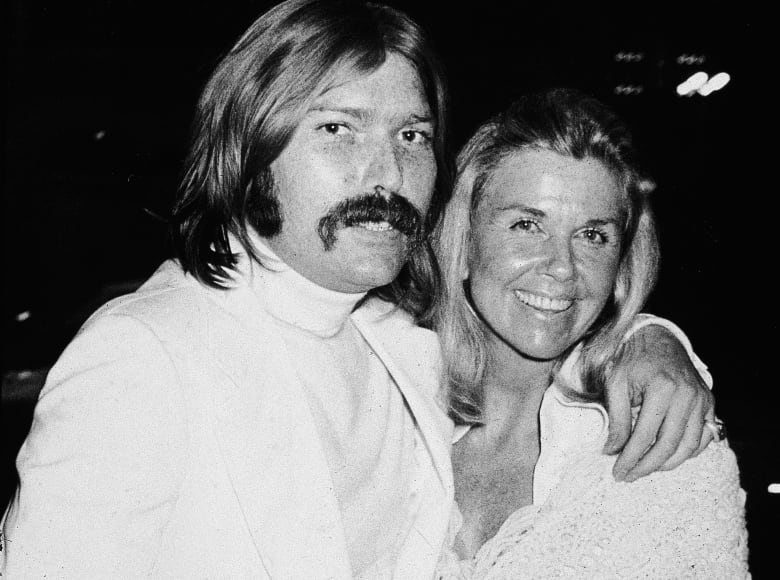 Day in the early 1970s with her son, American rock producer and songwriter Terry Melcher, who died in 2004. (Hulton Archive/Getty Images)

When Manson and his followers embarked on their murderous rampage in 1969, they headed for the house once owned by Melcher and instead came upon actress Sharon Tate and some visitors, all of whom were killed.

Day wed a fourth time, at age 52, to businessman Barry Comden in 1976, a marriage that ended in 1981. She lived in Monterey, Calif., devoting much of her time to the Doris Day Animal Foundation.