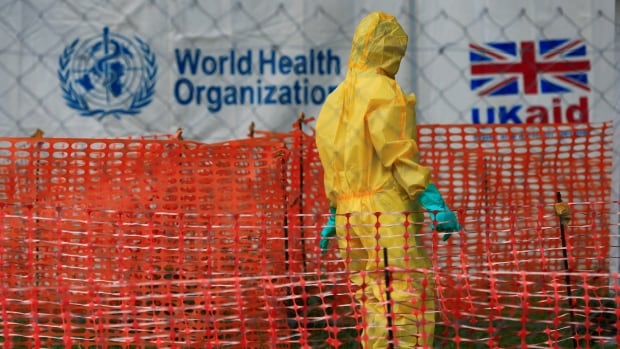 The Ebola outbreak in Congo that hit Uganda this week should not be declared a global emergency, the World Health Organization concluded Friday.

The outbreak is a health emergency in Congo (also known as Congo-Kinshasa) and the region, but does not meet the criteria to be declared a public health emergency of international concern, the WHO’s emergency committee said.

To be declared a global emergency, outbreaks must constitute a risk to other countries and require a co-ordinated response.

Dr. Preben Aavitsland, acting chair of the committee advising WHO, said they were deeply concerned about the lack of adequate funding and resources from the international community for the outbreak.

A gap of $ 54 million US needs to be filled for the period of February to July, WHO Director-General Tedros Adhanom Ghebreyesus said in accepting the committee’s recommendation.

This outbreak, the second-deadliest in history, has affected more than 2,100 and killed more than 1,400 people since it was declared in August.

Although the <a href=”https://twitter.com/hashtag/Ebola?src=hash&amp;ref_src=twsrc%5Etfw”>#Ebola</a> outbreak in <a href=”https://twitter.com/hashtag/DRC?src=hash&amp;ref_src=twsrc%5Etfw”>#DRC</a> does not pose a global health threat, I want to emphasise that for the affected families and communities, this outbreak is very much an emergency.

Congo’s outbreak is in the northeastern region, near the borders of Uganda, Rwanda and South Sudan.

Response workers have said mistrust has been high in the border region, which is experiencing its first outbreak. Attacks by rebel groups, including on health centres, are also hampering efforts to stamp the disease out.

“It’s a very scary disease and the response is sort of an overwhelming public health response, so it’s quite reasonable that there is resistance,” said John Johnson from Doctors Without Borders. “But it’s made working here very difficult.”

On Monday, a Congolese family travelling to Uganda brought the virus over that border.

The WHO emergency committee urged neighbouring “at risk” countries to improve their preparedness for detecting and managing exported cases, “as Uganda has done.” Uganda has successfully fought previous outbreaks of Ebola.

The disease is spread mainly through contact with the bodily fluids of those infected.

Health authorities in both Congo and Uganda are tracking contacts of those infected to check for any signs and symptoms of the hemorrhagic fever and to offer them a preventative vaccine.