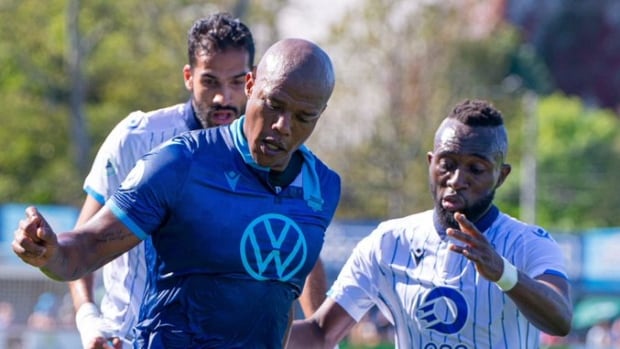 Tomi Ameobi scored in the 80th minute as FC Edmonton salvaged a 1-1 draw against HFX Wanderers FC on Saturday in a matchup between last-placed teams in the Canadian Premier League.

Amer Didic had given the Halifax-based team a 1-0 lead with a goal in the sixth minute of the match.

FC Edmonton is 3-5-6 to sit in sixth place through the league’s fall competition. HFX is last in the seven-team league at 2-6-6.

Kyle Bekker, Elimane Cisse and Tristan Borges scored to lift Forge (8-1-4) into first place in the fall league with a win over Pacific (4-7-3).

WATCH | Cavs and York play to a draw:

Nico Pasquotti scored late with Cavalry FC down to nine men, but Wataru Murofushi leveled the match right before the whistle blew in injury time. 1:36