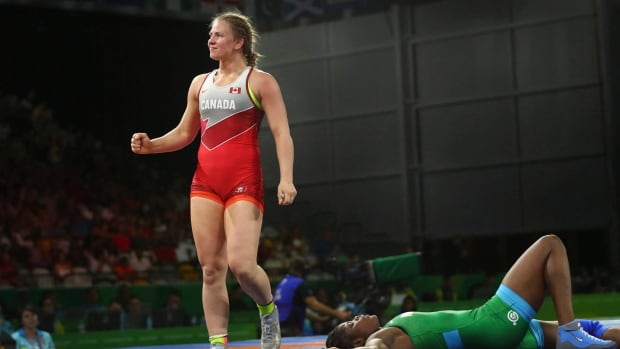 Reigning Olympic champion Erica Wiebe finds herself on the ropes in the quest to qualify for the 2020 Games in Tokyo.

But the 30-year-old made some small gains at the Canadian wrestling trials in Niagara Falls, Ont., on Friday.

Wiebe earned a berth to the women’s 76 kg final after rolling through her two first round opponents, Shauna Kuebeck and Taylor Follensbee, by a combined score of 20-0.

With a spot in the Pan American Olympic qualification tournament in March on the line, Wiebe will face Justina Di Stasio.

That meet represents the final chance to qualify for Tokyo 2020. Di Stasio won gold at the 2018 world championships and 2019 Pan Am Games.

Wiebe and Di Stasio will square off in the best-of-three final on Saturday at 4 p.m. ET. Watch it live on CBCSports.ca.

2016 Olympic champion Erica Wiebe will wrestle Justina Di Stasio in the finals of the 76kg division at the Canadian wrestling trials on Saturday. The winner will move ahead in qualification, while the loser will see their Tokyo Olympic dreams come to an end. 0:54

At the last-chance tournament, finalists in each event will book their tickets to Tokyo.

On the men’s side, Korey Jarvis will take on Amar Dhesi in the heavyweight final. Jarvis, a 2016 Olympian hasn’t dropped a match to a Canadian in six years.

A poor performance at the world wrestling championships in September put Wiebe in the win-or-else situation. ​​The Calgary resident led 3-1 in the dying seconds of her quarter-final match before Epp Mäe of Estonia scored a takedown to prevail 4-3 in the 76 kg bout.

Wiebe recently defeated Di Stasio in the 76 kg final at the 2019 Canada Cup in June.

At the 2016 Games in Rio de Janeiro, Wiebe became the third Canadian to win Olympic gold in wrestling.