Thousands mourned the Ethiopian plane crash victims on Sunday, accompanying 17 empty caskets draped in the national flag through the streets of the capital as some victims' relatives fainted and fell to the ground.

The service came one day after officials began delivering bags of earth to family members of the 157 victims of the crash instead of the remains of their loved ones because the identification process is expected to take such a long time.

The CBC's Susan Ormiston reports from a memorial service on Sunday in Addis Ababa for the victims of the Ethiopia Airlines crash. 1:09

Family members confirmed they were given a one-kilogram sack of scorched earth taken from the crash site. Many relatives already have gathered at the rural, dusty crash site outside Ethiopia's capital.

The victims of Ethiopian Airlines Flight 302 came from 35 countries, including 18 Canadians, and included many humanitarian workers headed to Nairobi. 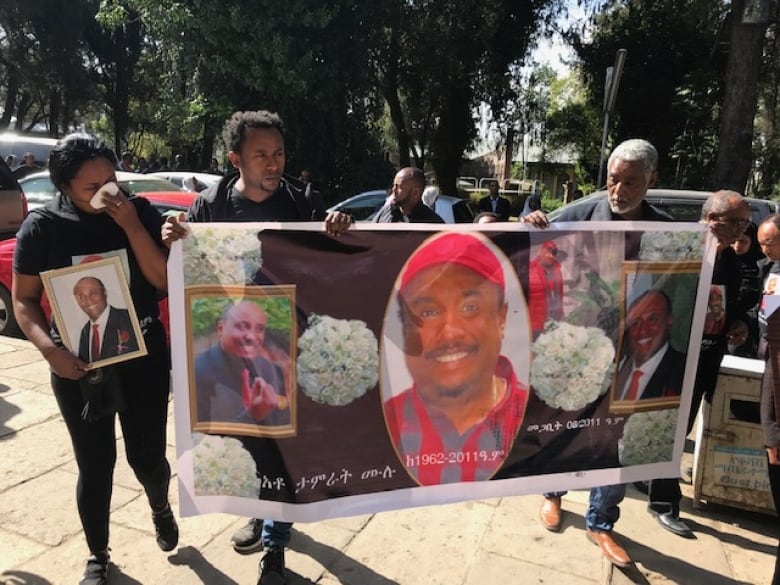 Mourners and Ethiopian Airlines crew gathered by the thousands to honour their dead. (Susan Ormiston/CBC)

Elias Bilew said he had worked with one of the victims, Sintayehu Shafi, for the past eight years.

"He was such a good person," Bilew said. "He doesn't deserve this. He was the pillar for his whole family." 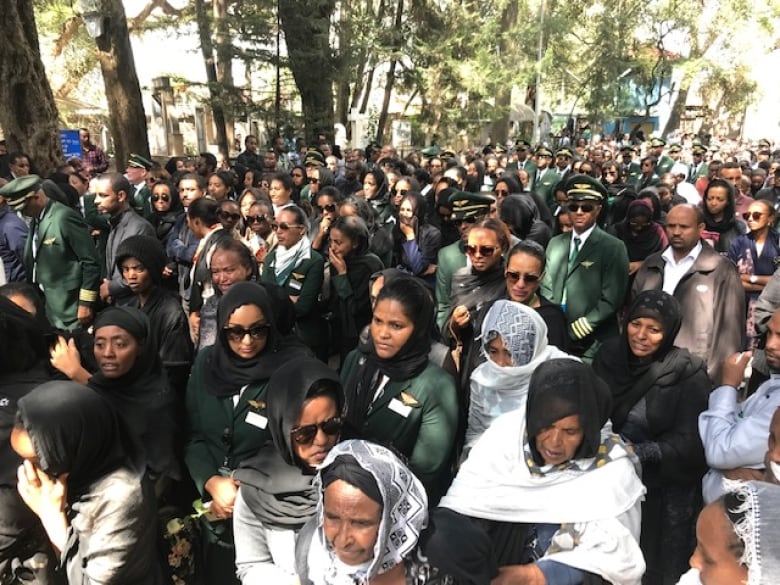 As friends and families grieved, investigators in Paris continued their work on the planes' black boxes. They had been sent to France because the French air accident investigation agency BEA has extensive expertise in analyzing such devices.

Experts from the U.S. National Transportation Safety Board and the plane's manufacturer Boeing are among those involved in the investigation.

The U.S. Federal Aviation Administration has said satellite-based tracking data shows that the movements of Ethiopian Airlines Flight 302 were similar to those of Lion Air Flight 610, which crashed off Indonesia in October, killing 189 people. Both involved Boeing 737 Max 8 planes.

The planes in both crashes flew with erratic altitude changes that could indicate the pilots struggled to control the aircraft. Shortly after their takeoffs, both crews tried to return to the airports but crashed.

The United States and many other countries have now grounded the Max 8s as the U.S.-based company faces the challenge of proving the jets are safe to fly amid suspicions that faulty sensors and software contributed to the two crashes that killed 346 people in less than six months.