U.S. President Donald Trump's abrupt declaration that Washington will recognize Israel's sovereignty over the disputed Golan Heights drew strong condemnation from Syria, while the European Union and countries like Egypt and Russia also rejecting the overture.

The Syrian government called it "irresponsible," and a threat to international peace and stability. The Foreign Ministry in Damascus also said Syria is now more intent on liberating the Golan, "using every possible means."

The EU reiterated on Friday its position "has not changed" despite Trump's overture.

"The European Union, in line with international law, does not recognize Israel's sovereignty over the territories occupied by Israel since June 1967, including the Golan Heights and does not consider them to be part of Israel's territory," an EU spokesperson told Reuters.

Trump's administration has been considering recognizing Israel's sovereignty over the Golan, which Israel captured from Syria in the 1967 Arab-Israeli war. Last week, in its annual human rights report, the State Department dropped the phrase "Israeli occupied" from the Golan Heights section, instead calling it "Israeli controlled."

After 52 years it is time for the United States to fully recognize Israel’s Sovereignty over the Golan Heights, which is of critical strategic and security importance to the State of Israel and Regional Stability!

Against this backdrop of hostility towards the U.S. move, Secretary of State Mike Pompeo landed in Beirut after visiting Israel on Friday. He is expected to pile pressure on the government to curb the influence of the Iran-backed Hezbollah.

The declaration is the latest in a series of moves that have fuelled anger among Israel's Arab enemies and U.S.-allied Arabs.

It follows the U.S. recognition in December 2017 of Jerusalem as Israel's capital — a decision that also drew international criticism as the disputed city's status remains at the heart of the Israel-Palestinian conflict.

The ministry "stressed the importance that everybody should respect the resolutions of international legitimacy and the United Nations Charter in respect of the inadmissibility of acquiring land by force," the statement said.

Israel captured much of the Golan from Syria in a 1967 war and annexed it, a move not endorsed internationally. Netanyahu raised the possibility of U.S. recognition in his first White House meeting with Trump in February 2017.

A Golan Heights force was set up after the 1973 Arab-Israeli war to monitor the ceasefire. Much of the world, including Canada, recognizes the Golan Heights as occupied territory. 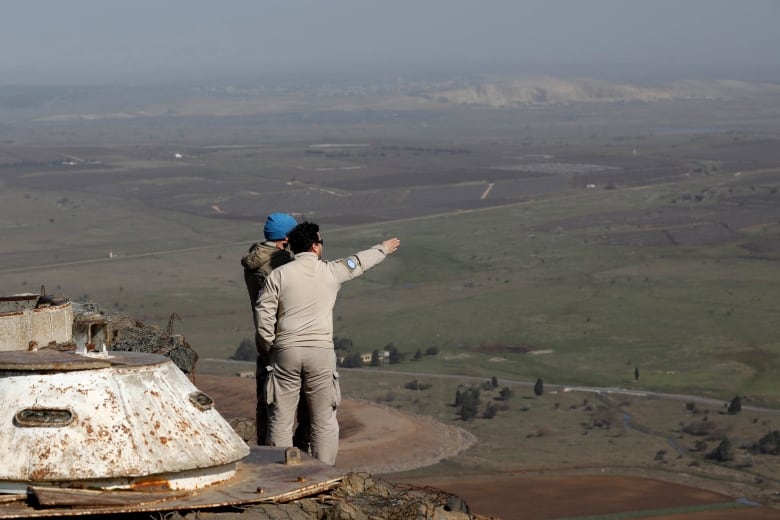 UN personnel stand at a lookout point as they monitor the Israel-Syria border in the Israeli-occupied Golan Heights, on Jan. 21. (Jalaa Marey/AFP/Getty Images)

France's Foreign Ministry said recognition of Israel's annexation is contrary to international law. "The Golan is a territory occupied by Israel since 1967. France does not recognize the Israeli annexation of 1981," the ministry said in a daily briefing.

"The recognition of Israeli sovereignty over the Golan, occupied territory, would be contrary to international law, in particular the obligation for states not to recognize an illegal situation," the ministry also said.

Israeli Prime Minister Benjamin Netanyahu faces an election on April 9 and has been pressing for the United States to recognize Israel's claim to sovereignty over the Golan Heights.

Trump remains popular in Israel, and his advisers have been developing a Middle East peace proposal for release sometime after the Israeli elections. Netanyahu tweeted his gratitude.

Russia, an ally of President Basharal-Assad with forces in Syria, said Trump's comments risked seriously destabilizing the region and expressed hope the statement was just declaratory.

Iran, Assad's main regional ally and which also has forces in Syria, condemned the statement as illegal and unacceptable.

Turkey, a U.S.-allied state and an adversary of Damascus, also criticized the move, saying it had brought the Middle East to the edge of a new crisis and the legitimisation of the occupation of the Golan Heights could not be allowed.

Canada ended a 32-year peacekeeping mission in the Golan Heights in 2006.