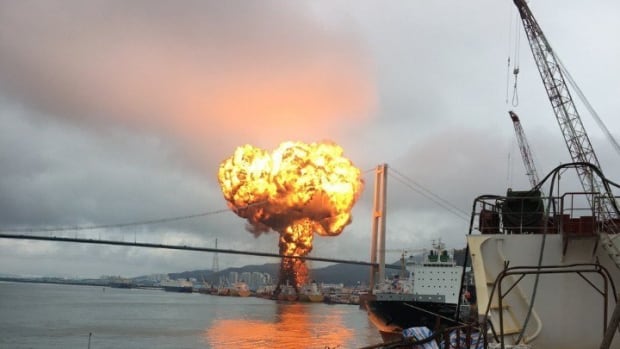 An explosion on an oil tanker at a South Korean port sent a spectacular ball of flames into the air and injured 10 sailors before it was put out, Yonhap news agency said on Saturday.

Video and photos posted online showed a giant fireball billowing out and rising up over the port in the southern city of Ulsan, followed by thick smoke.

In a video apparently filmed from a car dashcam, at least two cars can be seen crossing a nearby bridge at the time of the explosion and narrowly missing the rising flames.

The explosion broke out on a Cayman Island-flagged oil tanker called Stolt Groenland with 25 sailors aboard, including Russians and Filipinos, Yonhap reported, citing police.

The fire spread to another oil tanker docked nearby, the 9,000-tonne, South Korean-flagged Bow Dalian, with 21 aboard, a coast guard official said.

All of the sailors on both ships were rescued, but 10 people, most of whom were workers at the terminal, have been injured so far, a fire official said. Nine of them were South Korean, including one in a critical condition, and the other was from India.