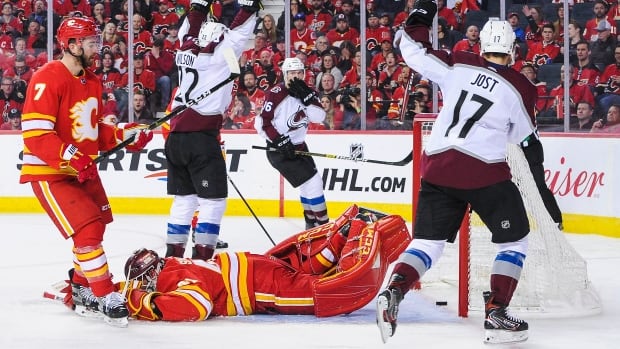 Spurred by a dominant Nathan MacKinnon, the Colorado Avalanche ousted the Flames from contention with a 5-1 win Friday to win their first-round series four games to one.

The Avalanche advanced to the second round of playoffs for the first time since 2008.

“It’s awesome to win a round,” said MacKinnon, who had three goals and five assists in the series. “It’s been a while for this organization and I, personally, have never won a round so I’m really excited about it.”

Calgary topped the Western Conference with a 50-27-7 record, but bowed out to a team that sprinted the final two weeks of the regular season to secure the last wild-card berth at 38-30-14.

Colorado beat Calgary 5-1 in Game 5 to wrap up a 4-1 series win and eliminate the Flames from the NHL Playoffs. 2:05

“Obviously we were the big underdogs and no one picked us to win,” MacKinnon said. “I didn’t expect to win it in five, but we believed in this group.”

In four straight wins to take the series, Colorado beat Calgary to the puck in all three zones and forced the Flames to chase and defend.

MacKinnon was the catalyst in the Avalanche’s superior speed with and without the puck. Flames goaltender Mike Smith called the 23-year-old from Halifax “a beast”.

“For anyone who doesn’t think MacKinnon is not one of the best if not the best, they might want to look at this series,” Flames captain Mark Giordano agreed. “He really took control and led their team.”

MacKinnon assisted on three goals Friday. Mikko Rantanen, who scored the equalizer and overtime winner in Game 4, and Colin White each had two goals and an assist.

Starter Philipp Grubauer had 28 saves and repelled a Johnny Gaudreau penalty shot in the first period.

T.J. Brodie countered for the Flames, with Smith stopping 27 shots in the loss.

The Flames follow the Tampa Bay Lightning in the hasty elimination of a top team from Stanley Cup contention.

The Lightning were swept in four straight by the Columbus Blue Jackets after earning the Presidents’ Trophy with the regular season’s best record (62-16-4).

Calgary ranked second in goal scoring in the regular season behind the Lightning and tied with San Jose.

But after opening the series with a 4-0 victory, the Flames didn’t score more than two goals in any game after that.

The NHL’s highest scoring team on home ice this season mustered only one Friday despite head coach Bill Peters juggling his lines in an attempt to spark the offence.

“Some of the strengths we had during the regular season weren’t strengths in Round 1,” Peters said.

“I can’t explain it to you why some of those went away. It’ll be interesting as we reflect and look back and try and find some answers.

Gaudreau’s penalty shot attempt was unsuccessful, he shot the puck wide on a clear first-period breakaway and had what would have been his first goal of these playoffs waived off for goaltender interference in the second.

“I had a ton of chances tonight,” Gaudreau said. “I didn’t find the net when I should have a couple times during the series.”

Colorado was the more confident team Friday after coming from behind to win both the second and fourth games of the series 3-2 in overtime, and decisively beating Calgary 6-2 in Game 3.

The Flames outshot the Avs 14-10 in the second period Friday, but still trailed 4-1.

“The season we had we were not expecting to go out in five games obviously in the first round,” Giordano said.

“Right now it doesn’t feel good. We had a great season and we couldn’t find a way to get leads in the playoffs and stick to it when we did have the lead.

“It’s sour right now because a couple games we let slip away. Nights like tonight, it felt like nothing was going in for us and they were burying.”