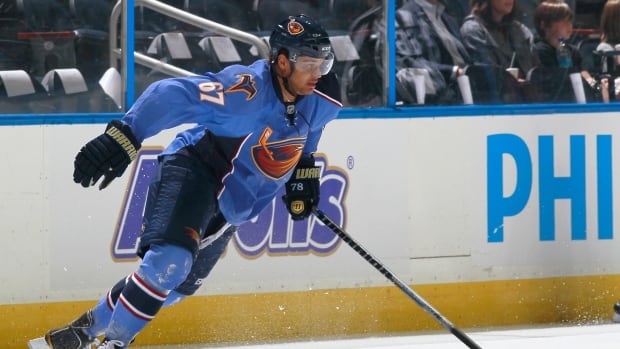 In a series of tweets Monday, former NHL defenceman Akim Aliu accused current Flames head coach Bill Peters of directing racial slurs at him while both were with AHL Rockford in 2009-10.

“Not very surprising the things we’re hearing about Babcock. Apple doesn’t fall far from the Tree, same sort of deal with his protege in YYC,” the Nigerian-born Aliu, 30, tweeted. “Dropped the N bomb several times towards me in the dressing room in my rookie year because he didn’t like my choice of music”

Not very surprising the things we’re hearing about Babcock. Apple doesn’t fall far from the Tree, same sort of deal with his protege in YYC. Dropped the N bomb several times towards me in the dressing room in my rookie year because he didn’t like my choice of music. First one to

admit I rebelled against him. Wouldn’t you? And instead of remedying the situation, he wrote a letter to John McDonough and Stan Bowman to have me sent down to the ECHL. 20 year old on pace for 20 goals in his first pro year with zero PP/PK time was off to a great start in his

Calgary GM Brad Treliving responded to the accusation following the Flames’ 3-2 overtime loss to the Penguins.

“During tonight’s game, I was made aware of a tweet from former player Akim Aliu and obviously we are playing so I haven’t had a chance to sit down with Bill or our people internally to talk about this and get to the bottom of it,” Treliving said.

“I would say we take these matters, very, very seriously. And so until such time as we have a chance to speak about it internally, we obviously wanted to address [the media], we’re aware of it.”

“Like I said, I haven’t had a chance to talk to Bill. I will be doing that and until such time we won’t have any further comment about it, but we will address it and get back to you people once we have a chance to speak internally.”

Treliving spoke to the media after Calgary’s 3-2 OT loss in Pittsburgh on Monday. 0:56

Treliving also released a written statement after the game.

“Through social media, we became aware of this issue during the game this evening. We take these matters very seriously. We want to complete a full and proper investigation before we provide any further comments on the matter.”

Peters was not made available to speak with reporters after the game.

Peters coached Rockford, the Chicago Blackhawks minor-league affiliate, for three seasons from 2008 to 2011. Aliu played five games in the 2008-09 season in which he scored two goals.

Aliu dressed in 48 games the following year and amassed 11 goals and six assists before being sent down to Toledo of the ECHL.

At the time of the alleged incident, John McDonough was president of the Blackhawks while Stan Bowman was general manager.After the season, Aliu moved on from the Blackhawks organization.

Aliu, who was born in Africa but raised in Ukraine and Canada, later played seven NHL games over two seasons with Calgary.

Aliu’s allegation comes on the heels of reported controversial tactics used on rookies by Mike Babcock, who was fired by the Toronto Maple Leafs on Nov. 20.

Peters was hired as an assistant on Mike Babcock’s Detroit Red Wings staff in 2011, where he spent three seasons before moving on as Hurricanes head coach from 2014-2018. Peters was hired by the Flames just three days after resigning from his position in Carolina.

Peters also served as one of Babcock’s assistant’s for two seasons in the late ’90’s with the Western Hockey League’s Spokane Chiefs.