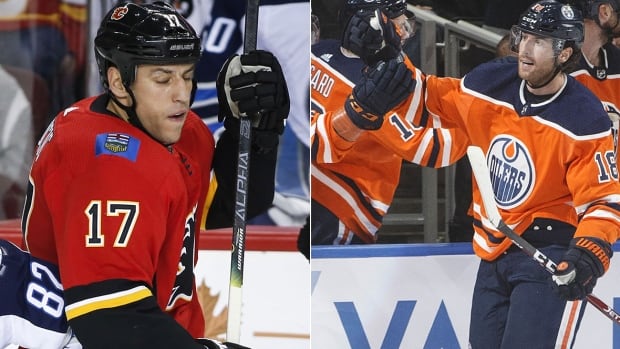 Call it a season of second chances in the Battle of Alberta.

From a distance, the Edmonton Oilers and Calgary Flames may appear to have simply traded aging — and expensive — spare parts this summer on the NHL version of Craigslist.

On the eve of training camp, the Flames extended a tryout invitation to former Oiler Tobias Rieder and ended up signing him to a one-year, two-way deal.

“It was a challenge mentally, obviously, not scoring a goal,” Rieder said of a long, cold 2018-19 season in Edmonton.

“But I think you just get tougher as a person. You learn to handle the mental aspect of the game and just try to get back to the player who you are.”

In both cities, there’s a quiet sense of optimism that the allegedly washed-up newcomers will rediscover their form.

David Rittich made 34 saves and Johnny Gaudreau had a goal and 2 assists in the Calgary Flames 3-0 victory over the Vancouver Canucks. 0:58

“If you play well, you’re going to get ice time,” Oilers head coach Dave Tippett said before the puck drop for the regular season. “There’s not a coach in the world that wants to have a guy who is playing really well sitting on the bench.”

It’s early, but Tippett is hardly sitting the Calgary castaways on the bench. Smith turned away 37 shots last Thursday in a 3-2 season-opening win over Vancouver.

On Saturday against Los Angeles, Smith tormented the Oiler faithful by coughing up the puck to Anze Kopitar and then turning it over to Kyle Clifford. Both giveaways ended up in the Edmonton net.

Smith, 37, certainly adds a new dimension to the Oilers with his ability to clear the puck and create scoring chances in the transition game. But his excursions outside of the blue paint come with a degree of risk.

Still, the Oilers prevailed 6-5 over the Kings. Smith collected his second victory in as many starts, and Neal potted his first two goals of the season, including the game winner.

A 10-time 20-goal scorer, Neal languished in Calgary last season with only nine goals in 63 contests. Head coach Bill Peters parked the veteran in the press box when the Colorado Avalanche eliminated the Flames in Game 5 of the first-round playoff series.

James Neal scored his first 2 goals with Edmonton while Connor McDavid registered 4 points in the Oilers 6-5 win over the LA Kings. 1:01

In Edmonton, Neal is skating on the second line with Ryan Nugent-Hopkins. Assisting on both his goals Saturday was Connor McDavid.

“I felt good coming to camp,” Neal told Edmonton reporters after the game. “I knew I’d get a chance to play with great players, and that’s all you can ask for.”

In terms of offensive production, no one in Calgary expects Lucic to keep pace with Neal. As a group, the Flames are speedy and small, and general manager Brad Treliving badly wanted to add some meanness and muscle after the first-round playoff exit.

As such, the Flames are counting on the 6-foot-3, 231-pound Lucic to serve as a bodyguard for Johnny Gaudreau, Matthew Tkachuk and friends.

An ornery Lucic landed a right hook, earning himself 17 penalty minutes (an instigator minor, fighting major and a 10-minute misconduct) and effusive praise from his teammates.

“I went to Europe this summer for four weeks just to get away and enjoy life and get all relaxed again,” said Lucic, who added two tripping minors to his penalty total (21 minutes) in Saturday’s 3-0 victory over the Vancouver Canucks. “The main thing was to mentally have fun again and not put too much pressure on myself.”

Speaking of pressure, Peters told reporters upon signing Rieder that he is an “elite penalty killer” in the NHL. After sitting out the first game as a healthy scratch, Rieder drew into the lineup Saturday night and earned a positive review from his new boss.

“Toby was good,” Peters said. “He does a lot of subtle things – pressures the puck, was good on the kill. I think he’s going to form a really good tandem there with Derek Ryan. So that will be good.”

On the Saturday night call-in shows, Oilers fans celebrated the offensive prowess of Neal and laughed at the Lucic parade to the penalty box. The Calgary faithful howled over the Smith giveaways and preached about the value of Rieder while shorthanded.

Don’t be surprised if the inter-provincial trash talk continues for the next six months … and beyond.