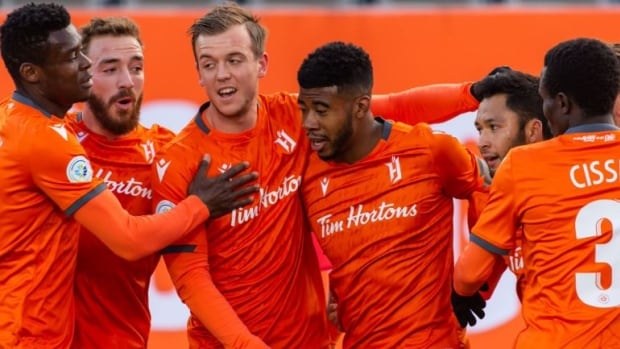 Anthony Novak and David Choiniere powered a Kyle Bekker-less Forge FC to a 3-0 win over Pacific FC in their CPL debuts on Wednesday, giving the Hamilton side their first victory in club history.

Novak made an immediate impact in the CPL by scoring a spectacular goal in the third minute, starting with his back to the goalkeeper and turning before blasting a shot into the top right corner of the net at Tim Hortons Field.

Fellow Forge forward Emery Welshman converted on that same north-stand side soon after, slotting home the second goal in the 14th minute after holding off a defender and finessing a series of impressive touches.

Choiniere assisted on Welshman’s marker, his first in the CPL.

Missing centre-forward Marcus Haber up top due to a toe injury, Pacific FC’s best chance in the match came in the final moments of the first half when a perfectly-weighted ball at the back post was headed wide by Issey Nakajima-Farran.

The final goal of the game came in the second half, in the 70th minute, when Forge captain Giuliano Frano headed home a Daniel Krutzen corner.

It wasn’t pretty, by any means, but it was ultimately effective for Cavalry FC, as Tommy Wheeldon Jr.’s side picked up their second consecutive victory at Spruce Meadows by way of a 1-0 result against Valour FC, with Jose Escalante scoring the only goal of the game in the 86th minute of play to give the Cavs’ all three points.

The Honduran winger-turned-forward struck a delicious free kick late in the match – the first free-kick goal scored in Canadian Premier League history – to earn the result for his team in a match that was otherwise dictated by the physical nature of play.

If there were any indications that this match would take on a free-flowing and spacious look, they were quickly dispelled as the two teams swapped fouls throughout 90 minutes – 13 in the first half alone, 30 in total.

Jose Escalante’s goal in the 86th minute secured a 1-0 win for Cavalry FC, who became the first CPL club to reach two wins in the spring season. 1:06

Valour nearly opened the scoring in the 17th minute, Ali Musse testing goalkeeper Marco Carducci with a strong drive between the two Cavalry centre-backs before shooting on goal, but Carducci made a clean save to preserve the deadlock.

Rather than opening up the play for more efforts of the sort, the rest of the first half was riddled with rough tackles and a first yellow card, to Valour defender Jordan Murrell.

Escalante nearly gave the Cavs a lead in the 47th minute, getting on the end of a quick ball but hitting his shot against the side-netting in agonizing fashion. Valour’s Martin Arguiñarena responded, in kind, with a hard drive toward Carducci, who dove low to make the reflex save.

But Escalante would not miss his second effort, hitting a left-footed free kick through the Valour wall and past Tyson Farago to give his team a second win out of two to start the 2019 CPL campaign.