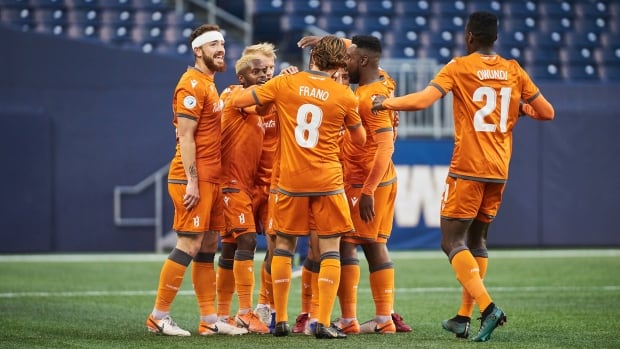 Forge FC retook top spot in the CPL’s Fall standings Thursday with a 3-1 win over Valour FC at IG Field, completing a season sweep of Valour with a 5-0-0 record while extending their unbeaten run to nine matches.

Goals came early at IG Field, the site of Valour’s record-setting 8-0 loss to Cavalry just 10 days prior, with Forge potting back-to-back goals after 15 minutes. Valour killer Anthony Novak finished a beautifully-worked one-touch sequence to score his fourth goal against VFC this year, only for Chris Nanco to convert on a fast break moments later.

Bizarre scenes followed in the 26th minute when Valour defender Adam Mitter intentionally handled the ball before it crossed the line, earning himself a red card and awarding Forge a penalty. Tristan Borges finished the spot-kick, putting the visitors up 3-0 in half an hour.

Down to 10 men, Valour continued to be pressured hard by Forge’s quick passing, possession-based game.

Rob Gale’s side came out more promising in the second half, eventually pulling one back after 70 minutes when 18-year-old Tyler Attardo finished a smooth attacking sequence at the back post.

Marco Bustos was inches away from grabbing another in the 85th minute when a cut-in-and-shoot attempt ricocheted off the post.

Forge would hold on for the win to leapfrog Cavalry FC for top spot in the Fall with 23 points from 10 matches.

Valour FC will head to Ontario next, taking on York9 FC at York Lions Stadium on Sunday.