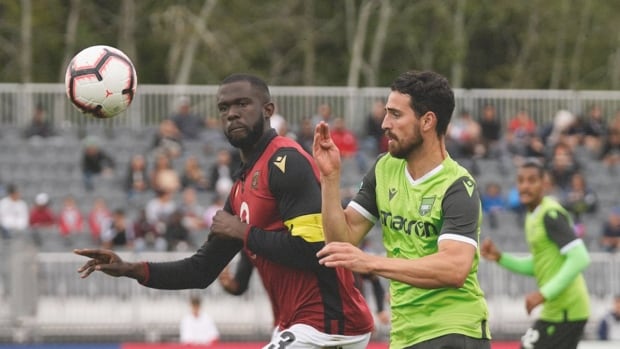 Fresh off a pair of embarrassing losses, Valour FC rebounded with a surprising 4-2 win over York9 FC on Sunday. Tyler Attardo scored two goals and Marco Bustos pulled the creative strings for the Winnipeg-based side.

York squandered a glorious chance to move into third place with a win, while also keeping pressure on front-runners Forge FC and Cavalry FC.

Instead, the Nine Stripes dropped to sixth and 11 points off the top of the table—a definite blow to their hopes of winning the Fall season.

Outscored 11-1 in their last two games – both losses – Valour moved into a tie with Pacific FC for third place with their first victory since Aug. 28.

Valour coach Rob Gale made six line-up changes from Thursday’s home loss to Forge FC, including giving starts to centre back Skylar Thomas, midfielder Dylan Sacramento and Attardo.Tyson Farago started in net for Valour, as Mathias Janssens did not travel with the team due to personal reasons. Valour was also missing Michael Petrasso due to injury.

Y9 coach Jim Brennan went with the exact same starting 11 from a midweek road win over Pacific FC, which meant Ryan Telfer was on the bench upon his return from international duty with Trinidad and Tobago. Telfer entered the game at the start of the second half.

Forge extend lead at top of the table

The result, which was played out between the Canadian Premier League’s top and bottom teams in the Fall standings, extends Forge’s unbeaten run in the Fall season to 10 matches.

The Wanderers started off strong in just their second game since Aug. 10, keeping Forge from recording a shot on target in the first half. HFX would find the net soon after halftime via Akeem Garcia. Mohamed Kourouma’s well-weighted pass found Garcia, who slashed home his fifth goal of the season to the far side of Henry.

Play opened up after the goal. Nine minutes later, operating in new-found space, Juan Diego Gutierrez would grab a second for the Wanderers, when he smashed a curling-yet-powerful attempt from the corner of the box into the top corner.

Forge FC widens their lead in the standings with a 2-2 draw vs. HFX Wanderers FC. 1:12

League-leading Forge stormed back in the last 30 minutes, starting with their first shot on target, in the 68th minute, when Chris Nanco flicked the ball past ‘keeper Christian Oxner off an in-swinging cross. Tristan Borges found an equalizer in the 81st minute, with a one-hit smash from a smart Anthony Novak layoff.

The teams meet again in Halifax on Wednesday at 5:30 p.m. ET.