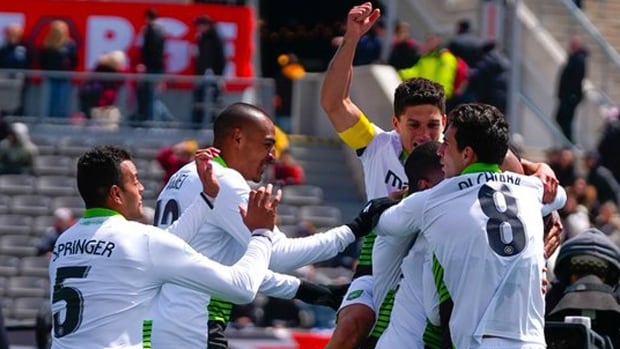 York 9 FC’s Ryan Telfer, on loan from Toronto FC, goes into the history book as the first to score in the Canadian Premier League.

But Forge FC substitute Kadell Thomas had the last laugh Saturday, delivering the tying goal to make the most of the platform afforded by the new Canadian pro soccer league.

“He’s one of those players that we don’t know about without the Canadian Premier League,” said Forge coach Bobby Smyrniotis.

“I think there’ll be many Kadell Thomases on Forge FC and more importantly all across the league,” he added.

Thomas, a 22-year-old from Brampton, Ont., who played under Smyrniotis at Sigma FC, came on in the 56th minute and scored the tying goal in the 78th minute as Forge FC and York finished deadlocked at 1-1 before an announced crowd of 17,611 at Tim Hortons Field in Hamilton.

“It’s an amazing feeling,” said Thomas, who came to the CPL from U.S. junior college and League 1 Ontario where he starred for Sigma.

‘It’s been a journey’

So amazing that Thomas forgot the goal celebration he had planned.

Emery Welshman — another Sigma product — played provider, sending a cross from the byline into the penalty box to Thomas, who controlled the ball and then curled a right-footed shot high into the goal.

“Even two, three years ago, I couldn’t imagine something like this — being in Canada,” he added.

Telfer wasted little time making history with the first CPL goal. He beat Forge FC goalkeeper Triston Henry in the third minute with a right-footed shot from the edge of the penalty box after captain Manny Aparicio’s perfect through ball stranded three defenders.

Forge FC came on strong and had multiple chances to tie the game but was unable to convert until Thomas’s late strike. York 9 was in defensive mode as the match wore on and did not manage a shot in the second half.

“Overall I think it’s what everyone hoped it would be,” said Smyrniotis. “It’s a great festival for the game. It’s a great starting point for what we’re going to build for the future.”

“Look, we wanted to spoil the occasion for them today,” said York coach Jim Brennan. “We wanted to come away with a point or three points. So we’re happy. We’ve done our job today.”

While the sides had only been together for some seven weeks, the opener delivered on entertainment. Both teams looked to play attractive possession-based soccer as best they could on a windy, crisp afternoon.

Tickets were essentially free thanks to Forge owner Bob Young, who also owns the CFL Tiger-Cats. Spectators were asked to make a donation to youth soccer while season-ticket holders were offered free passes to another game.

For Brennan, the anthem signalled a special day.

“So we all looked at each other and said ‘You know what? This is it guys. This is our pro league, guys. We’re finally making a statement here.”‘

9 Canadian starters on each side

Under league rules, teams must have a minimum of six domestic players and maximum of five foreign players in their starting lineups.

Aparicio had a fine performance for York 9 FC, but his day ended a little early after being sent off for a second yellow card in stoppage time.

The seven CPL teams will each play 28 regular-season games, 14 home and 14 away, in a season split in two, with spring and fall champions meeting to decide the year’s overall winner.