As night fell, the famed Champs-Elysé​es, where fashion designer Karl Lagerfeld switched on the red lights of Christmas just a few days ago, was still aglow with fires lit by protesters.

French President Emmanuel Macron thanked police forces for their "courage and professionalism" in dealing with demonstrators as calm progressively returned to the Champs Elysé​es.

"Shame on those who attacked them … There is no room for this violence in the Republic," Macron said on Twitter.

During the clashes, a trailer was set on fire and exploded on the Champs Elysé​es, France's most famous tourist avenue, and a man who tried to attack firefighters was overpowered by some of the demonstrators themselves. 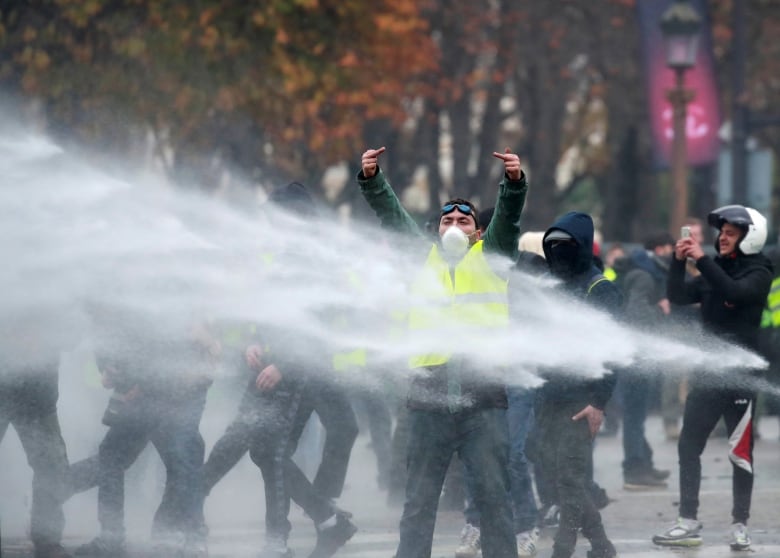 Police used tear gas and water cannon in an effort to disperse the crowd along the Champs-E​lysées in Paris. (Gonzalo Fuentes/Reuters)

Around 8,000 protesters had converged on the Champs Elysé​es, where police tried to prevent them from reaching the president's Elysée Palace.

Police detained 130 people in Paris and in protests in other parts of the country.

Protesters are opposed to taxes Macron introduced last year on diesel and petrol which are designed to encourage people to switch to cleaner forms of transport. Alongside the tax, the government has offered incentives to buy electric vehicles.

For more than a week, protesters clad in the fluorescent yellow jackets that all motorists in France must have in their cars have blocked highways across the country with burning barricades and convoys of slow-moving trucks, obstructing access to fuel depots, shopping centres and some factories.

"Ultra-right networks were very mobilized on the Champs Elysé​es," he said. There were about 20 people injured, according to police.

Last Saturday nearly 300,000 people took part in the first yellow vest demonstrations countrywide. By early evening on Saturday, more than 106,000 demonstrators were involved in protests across France, according to the ministry.

The unrest is a dilemma for Macron, who casts himself as a champion against climate change, but has been derided as out of touch with common folk and is fighting a slump in popularity. 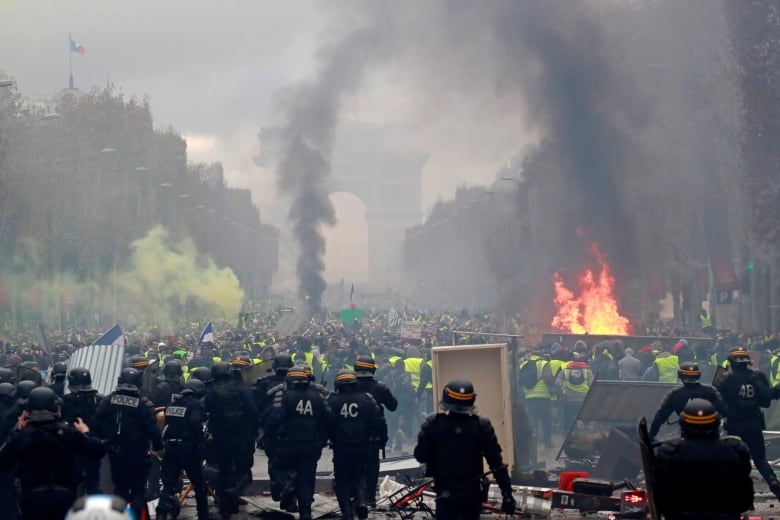 Protesters wearing yellow vests, which every French driver must carry in the car, run from police during riots on the Champs-E​lysées over fuel prices. (Gonzalo Fuentes/Reuters)

While the movement, which has no leader, began as a backlash against higher fuel prices, it has tapped into broader frustration at the sense of a squeeze on household spending power under Macron's 18-month-old government.

Since coming to power, there have been trade union and street demonstrations against Macron's changes to the labour rules. But he has overhauled the heavily indebted state rail operator. Foreign investors have largely cheered his pro-business administration.