HAMILTON – It was as if the sporting landscape in Hamilton shifted overnight.

In reality, it took just a few months for the two-team sports town featuring the CFL’s Tiger Cats and the OHL’s Bulldogs to double in size with the formations of the Canadian Premier League and the Canadian Elite Basketball League.

The city known as Steeltown for its industrial, steel-producing backbone has quickly become an athletic hotbed. The Tiger Cats will always be the big draw with their deep roots and long, storied history, but the new kids on the block, soccer’s Forge FC and basketball’s Honey Badgers, are ready to make their mark.

All of the sudden, the southern Ontario city is teeming with teams and becoming one of Canada’s leading sports cities.

Afinec, who’s originally from Burlington, Ont., is not only the chief operating officer of the Ticats, but also now holds the same role with Forge FC. Wearing both hats has been a bit of a juggling act as he tries to better understand the soccer landscape in the city, but it’s a venture Afinec has enjoyed to this point.

“We’re seeing a little overlap. There’s a different fanbase emerging in soccer. And we’re not surprised by that. From a business perspective that’s a great thing,” said Afinec.

From the ground up

It’s one thing to start a new franchise from the ground up — but it’s completely different to start two new franchises in two new leagues in one city nearly simultaneously.

Both the CPL and CEBL have distinctly Canadian features with a heavy emphasis on producing some of the country’s next top soccer and basketball players.

For instance, every CPL roster must be mostly Canadian, and on match days every team must field a minimum of six Canadian starters — a clear attempt to develop and use homegrown talent.

Forge FC is set to play its fourth game of this first year at Tim Hortons Field (also the home stadium for the Ticats) on Sunday. The game will be broadcast live on CBC and CBCSports.ca. The team owns a draw, a loss and a win through three games.

About an hour after their game on Sunday, the Hamilton Honey Badgers will take to the court at the FirstOntario Centre (also home to the OHL’s Bulldogs) for their first-ever CEBL game against the Edmonton Stingers.

One ticket will get fans into both games on Sunday as the teams and leagues work together to bolster each other’s profile in the city.

Afinec adds that he’s pleased with how Hamilton’s fans and teams have rallied around one another as the basketball and football seasons approach while soccer rolls on.

“There’s a great sense of partnership across all clubs in town,” said Afinec. “We’re launching leagues together. It’s a complicated thing.”

John Lashway knows a thing or two about starting a basketball franchise in Ontario. In 1995, Lashway brought nine years of NBA experience with the Portland Trail Blazers to Toronto to help the Raptors emerge in throught their city and the country.

Now he’s the president of the Honey Badgers and has been working relentlessly to make sure people know about the new league and new basketball team in Hamilton.

“Any time you’re part of something new it’s exciting,” said Lashway. “It’s a tremendous amount of work. It’s much different than walking into an existing league.”

Lashway says there have been some similarities to the early days of forming the Raptors. He openly admits the biggest challenge will be creating brand awareness with a limited budget and the absence of the NBA star power behind it.

“I think people don’t know we’re here yet,” Lashway said. “I think it’s important to get it right early. We don’t have a huge marketing budget. We need people to show up Sunday and then talk about it on Monday.”

For Sunday’s inaugural game, the team is pulling out all the stops to attract a wide range of fans. From a pregame party, to Disney characters, to face-painting to an in-stadium band playing during the game, Lashway says they’re doing everything they can to create the best game-day experience. 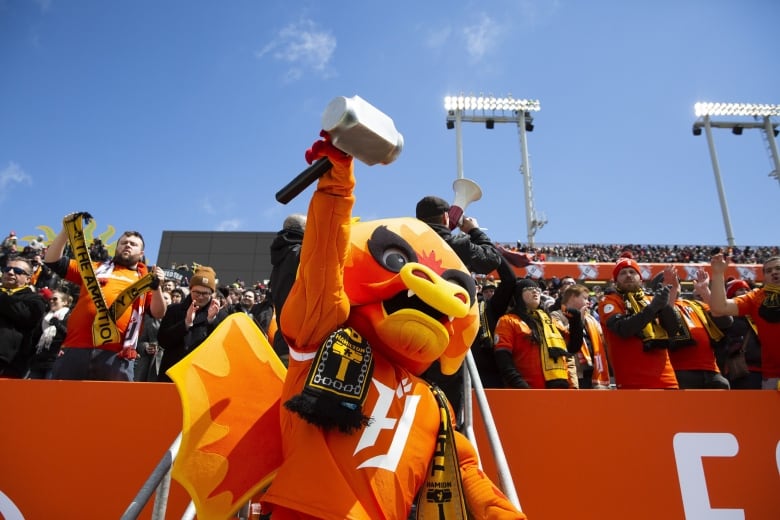 He also understands that all those bells and whistles mean nothing if the product on the court doesn’t match.

“The biggest surprise for me so far is the calibre of play. These guys are experienced professionals,” Lashway said.

There are six teams competing from across Canada in this first-ever CEBL season — Niagara, Ont., Abbotsford, B.C., Edmonton, Guelph, Ont., Hamilton and Saskatoon all have franchises.

There is already talk of expansion in the years ahead. It’s a league focused on developing Canadian basketball talent, with each roster requiring at least 70 per cent Canadian players.

Sunday could mark the start of a new era in Hamilton.