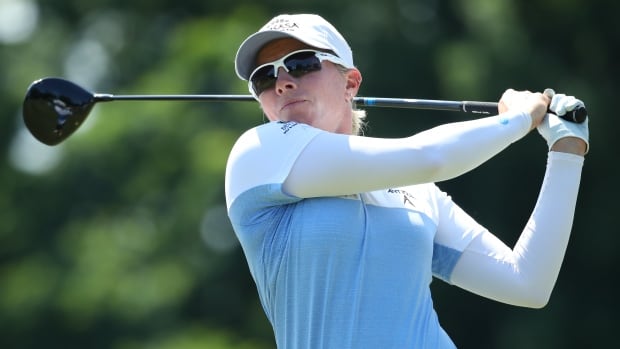 Alena Sharp of Canada and Youngin Chun of South Korea shared the Marathon Classic lead at 7-under 64 on Thursday, a stroke ahead of Stacy Lewis and three others at Highland Meadows Golf Club.

The 38-year-old Sharp, winless on the LPGA Tour, had eight birdies and a bogey.

“I played really well right from the first tee shot,” said Sharp, from Hamilton, Ont.. “I felt really calm this morning coming into this event. I always love playing here. I have great housing.”

Brooke Henderson, Smiths Falls, Ont., (67) is 4-under, Calgary’s Jaclyn Lee (69) came in 2-under, Calgary while Anne-Catherine Tanguay of Quebec City shot an even-par 71.

The 19-year-old Chun, also seeking her first LPGA Tour victory, had a bogey-free round.

The 38-year-old Sharp, winless on the LPGA Tour, had eight birdies and a bogey to grab a share of the lead at the Marathon Classic at 7-under par. 0:14

Lewis won the last of her 12 LPGA Tour titles in 2017. She was born in nearby Toledo and has an endorsement deal with Marathon Oil.

“It was awesome,” Lewis said. “The biggest thing is I hit 18 greens today. I’ve been working on the ball-striking a lot, so just really nice to see some results. Got a few putts to fall there on our last few holes.”

The Texan had seven birdies and a bogey.

“It’s a golf course I’m not necessarily 100% comfortable on,” Lewis said. “I just had some really good golf shots today. Had some easy tap-in birdies. I haven’t done that in the long time, in general.”

Thompson is coming off a two-week break.

“I played five weeks straight before that and really I’ve never played five weeks in a row in my career,” Thompson said. “It was definitely different for me. But two weeks off just relaxing, hanging out with my family and friends, just making sure I get that relaxing time was much needed. I felt good about my game coming into this week.”

Yealimi Noh, the 17-year-old from California who tied for sixth last week in Wisconsin in her LPGA Tour debut, had a 73. Playing on a sponsor exemption after Monday qualifying last week, she had five birdies and seven bogeys.