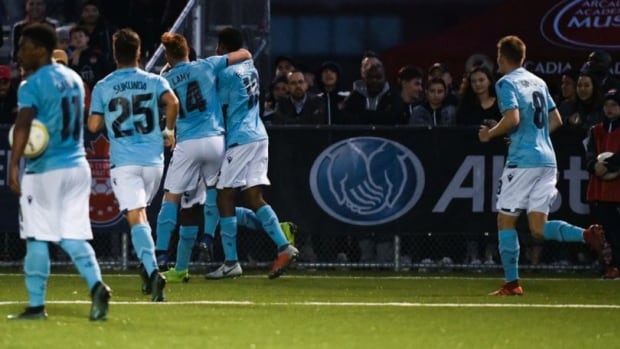 Mohamed Kourouma scored on a penalty kick in stoppage time, lifting the HFX Wanderers to a 3-2 road win over the Vaughan Azzuri on Wednesday in the first qualifying round for the Canadian soccer championship.

Tomasz Skublak and Akeem Garcia scored in the first half for the Wanderers, who host the Azzuri in Halifax in the second leg of the two-game series next week.

Vaughan had erased a 2-0 halftime deficit with second-half goals before Kourouma’s penalty.

The Wanderers, of the newly formed Canadian Premier League, controlled the game with 60 per cent possession and had 13 shots (three on target) to Vaughan’s nine (four on target).

This year’s Canadian Championship features an expanded 13-team, 24-match competition format. Canadian Premier League teams are participating in the tournament for the first time in the league’s inaugural season.

There are five rounds total in the competition. The winner will earn the Voyageurs Cup after the second leg of the final round, which is scheduled for September.

It was about as perfect a start as Tommy Wheeldon Jr. would have hoped for, as Cavalry FC took two precious away goals and a 2-0 lead over Pacific FC out of Westhills Stadium, giving his side the advantage after the first of two legs.

A ninth-minute sailing header goal by captain Dominick Zator off a Nico Pasquotti long throw, coupled with a 16th minute Oliver Minatel diving head from a Pasquotti cross all but sealed the result early in the first half, which was eventually secured due to a combination of strong defending and constant attacking pressure exhibited by the visitors.

Pacific FC, starting both Issey Nakajima-Farran and Marcus Haber up top, registered just two shots on target over 90 minutes, failing to test Cavalry to adequately claw back a draw, and now head to Spruce Meadows on May 22 with a bit of a mountain to climb, needing to win by three unanswered goals in order to advance to take on Forge FC.

A Julian Buscher crossbar hit, coupled with another chance on goal nearly compounded Pacific’s misery on the day, but despite the scoreline, the west coast outfit wasn’t entirely overwhelmed, Victor Blasco in particular providing some late chances that ultimately fizzled out prematurely.

A.S. Blainville played York9 FC to a goalless draw in the opening leg of their Canadian Championship tilt, setting up an intriguing second leg away to their Canadian Premier League opposition in York Region next week.

York9, which enjoyed nearly 70% possession in the match, focused the bulk of its attacks up the wings in the first half, with former Blainville wingback Diyaeddine Abzi getting plenty of attention. However, the Nine Stripes rarely accumulated possession in the final third — and almost never in front of the penalty area.

The best chance of the first half fell for Blainville when Pierre-Rudolph Mayard smashed a shot off the crossbar, nearly giving the PLSQ side the early lead.

York9 assistant coach Carmine Issaco shifted to three up top at the start of the second half, giving the CPL side more of a cutting edge.

Chances eventually came late in the second half, with Blainville’s Mayard missing an uncontested cross just meters away from goal. York9 followed up with a similar chance, as Emilio Estevez and Cyrus Rollocks came close to opening the scoring with a mad scramble in the penalty area.

Blainville’s size continued to give Y9 fits until the final moments as they defended aggressively, making life difficult for the Y9 midfield trio Estevez, Manny Aparicio and Wataru Murofushi.