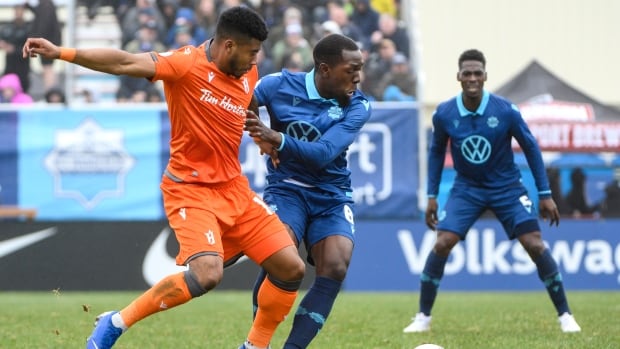 The Kitchen was rocking at Wanderers Grounds as HFX Wanderers FC made its home debut against Forge FC on Saturday, with the home outfit securing their first three points courtesy of an 82nd-minute goal by Luis Alberto Perea, giving Stephen Hart’s side a 2-1 victory in front of 6,000-odd supporters.

A first-half goal by Akeem Garcia in the 30th minute opened the festivities in Halifax, with Forge captain Kyle Bekker nearly levelling the score with a free kick that struck the crossbar.

Now familiar with second-half heroics, Forge’s Kadell Thomas scored an equalizer at the 57-minute mark, getting on the end of a Kwame Awuah cross to bring his team back to 1-1. But, Perea’s late effort – a well-struck drive on the end of a long cross from the left – brought the raucous home crowd to their feet in united Haligonian cheer.

HFX goalkeeper Jan-Michael Williams was forced into a big save on a Tristan Borges shot in the 87th minute, preserving his team’s precious lead. Three minutes of added time gave Forge a glimmer of hope, but the party was destined for Halifax, with the Wanderers holding on for a 2-1 victory.

The Wanderers now switch focus to Investors Group Field for a visit to take on Valour FC on May 11, while Forge FC return home to host Pacific FC at Tim Hortons Field on May 8.

It was Cavalry FC’s day on Saturday.

The Calgary-based outfit was victorious in its inaugural match at home, eventually edging York9 FC 2-1 in a nervy and snowy day at Spruce Meadows.

Calvary started the match in control with a number of chances and stand-out attacking plays, though it didn’t take long for Jordan Brown to break down York9’s door down. The English striker became the first goalscorer in Cavalry’s club history in the 26th minute, scoring with a nodded effort from just a few yards out off a corner kick swung in by Julian Buscher and first assisted by Jay Wheeldon.

Dominick Zator’s goal in the 78th minute propelled Cavalry FC to a 2-1 victory over York9 FC on Saturday in Spruce Meadows, Alberta. 1:05

The chances continued for Calvary as they headed into the break, enjoying 70% possession and a comfortable 1-0 lead. As the weather turned from cloudy to snowy, however, so did Y9’s fortunes in the second half, with Emilio Estevez, Cyrus Rollocks and Simon Adjei getting into the match at last.

However, in the 78th minute, Dominick Zator rose to smash home a beautiful header for Cavalry’s second goal of the day – and the second from a corner – to give the home team a 2-0 lead.

York9 made one last stab at a comeback late, with Adiej smashing home a well-worked play to make it 2-1. The 83rd-minute strike was just the second shot on target for Y9.

Last chances for York9 were not enough, however, as Cavalry held on to take a win in their club’s inaugural match.

Cavalry will now prepare to host Valour FC on Wednesday in another match at Spruce Meadows. York9, meanwhile, will shift their focus to the 2019 Canadian Championship and an away leg against AS Blainville on May 15. Jimmy Brennan’s York9 side will return to CPL competition on May 18 against Pacific FC at Westhills Stadium.

It’s not the free-flowing, fast-paced 4-3-3 soccer Jeff Paulus may have promised, but FC Edmonton will be more than happy with a 2-1 win over Valour FC away from home at Investors Group Field, with Mele Temguia and Oumar Diouck finding the back of the net to earn a debut win in the Canadian Premier League.

Sure, Valour FC controlled large spells of the play, taking the sword to the visiting Eddies throughout the 90 minutes in Winnipeg – outshooting, out-possessing and out-passing their opponents.

But the scoreline tells the more important story, as Edmonton put on a professional display of opportunistic goal-scoring, highlighted at the dying embers of the first half as Temguia tapped home a cross by Randy Edwini-Bonsu to surprise the home side.

It was the same story in the second half, as Edmonton shocked Rob Gale’s Valour back to reality off a corner kick, with Ramon Soria finding Amer Didic, and the 6-foot-4 defender spotting Diouck unmarked at the back post. Diouck made short work of the routine, tucking home his effort to double the Eddies’ lead.

The final team to make their CPL debut, FC Edmonton, held off Valour FC 2-1 on Saturday in Winnipeg. 1:10

And, while Michael Petrasso scored the first-ever penalty in CPL history in the 86th minute, it was not enough to claw back a point in this encounter.

So, the crowd of 9,699 fans in Winnipeg weren’t treated to a Valour win, in stark contrast to the team’s valiant effort at Pacific FC earlier in the week, which saw Dylan Carreiro score a second-half winner in a 2-1 victory.

Gale’s outfit will have another chance to correct the day, with Valour FC heading to Spruce Meadows to take on Cavalry FC on May 8. Meanwhile, FC Edmonton heads back home to Clarke Stadium to take on Pacific FC in their home opener.