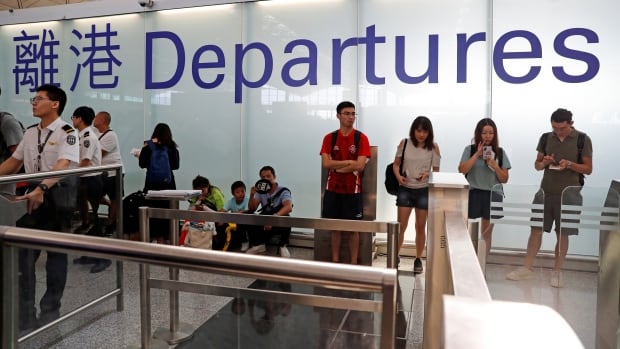 The Hong Kong airport will restart flights starting at 6 a.m. Tuesday after it shut down operations when thousands of pro-democracy demonstrators occupied its main terminal.

Hong Kong cancelled all flights not yet checked in by Monday afternoon, the agency said, as anti-government protesters peacefully demonstrated at the airport for a fourth day.

“Other than departure flights that have completed the check-in process and the arrival flights already heading to Hong Kong, all other flights have been cancelled for the rest of today,” the authority said in a statement.

Traffic on roads to the airport was congested and car park spaces were full, it said.

A traffic jam soon formed on the highway leading back to Hong Kong’s city centre, with some people walking in the sweltering weather.

Earlier Monday, Hong Kong police showed off water cannons that could be deployed in the case of future demonstrations, a development which Amnesty International has warned could lead to serious injuries if misused within the densely populated city’s confined spaces.

Hong Kong police demonstrated an anti-riot water cannon in a warning to protesters as authorities toughen their approach to the ongoing demonstrations. 0:37

Legislators and journalists were invited to witness the display of extreme crowd control tactics coming after a weekend of protests at the airport and on the streets of one of the city’s main shopping districts.

The increasingly violent protests have plunged Chinese-ruled Hong Kong into its most serious crisis in decades and presented a serious challenge to Beijing.

In Beijing, the cabinet’s Hong Kong and Macao Affairs Office issued a statement saying the situation in Hong Kong was “beginning to show the sprouts of terrorism” and constituted an “existential threat” to the population of Hong Kong.

Demonstrations began earlier this year in response to an extradition bill that would allow Hong Kong authorities to send people to China to face charges. The bill has been scrapped, but protests have continued as demonstrators accuse China of encroaching on Hong Kong’s political autonomy.

Last week, Canada increased its travel advisory for Hong Kong due to the protests, telling travellers to exercise “a high degree of caution.” The move came after the U.S. and Australia made similar updates to their travel alerts; Ireland, Britain and Japan have also issued travel advisories to their citizens.