If you’re a Raptors fan, you may remember a 2005 exhibition game in which Toronto became the first NBA team in 27 years to lose to Israeli powerhouse Maccabi Tel Aviv.

Star guard Anthony Parker nailed the go-ahead jumper with less than a second remaining, and the two-time EuroLeague MVP later parlayed that performance into a multi-year contract with the Raptors.

“My grandparents had some friends over who heard that I was from Toronto and they just started going bananas over Anthony Parker,” says Goldstein. “I thought, it’s really interesting how passionate they are, these 80-something-year-old women who I never would have guessed would be sports fans, and I was curious to know more.”

A decade later, Goldstein has turned that curiosity into a book. Alley-Oop to Aliyah was published Nov. 7.

In the last 40 years, more than 800 African-Americans have relocated to Israel to play in the Israeli Basketball Premier League. The book focuses on those players, but rarely delves into strategy or statistics.

“It’s really about identity, race, religion,” says Goldstein, who’s now the chief operating officer for USports, the governing body for university sports in Canada. “To me, basketball’s an interesting way of learning about that because you might not want to read about it on its own, but in a basketball context you might be taken by it.”

Honoured that Israeli citizen and bball legend Fred Campbell flew from ?? to Toronto to help launch the book (and see the Raptors play!) pic.twitter.com/Dtps1UYKAf

The most famous example of the type of player featured in Goldstein’s book is Amar’e Stoudemire, who made six all-star games and more than $ 160 million US in salary over 14 NBA seasons.

With his NBA career seemingly winding down in the summer of 2016, Stoudemire took his talents to HaPoel Jerusalem, an Israeli team he co-owned. The power forward, who identifies himself as a Hebrew Israelite, sold his stake and suited up for the team, winning a championship before retiring in September.

“He really took full advantage of the country while he was there. I don’t think that’s it for Amar’e in Israel,” says Goldstein, who features Stoudemire in the book.

Still, Goldstein’s intent with Alley-Oop to Aliyah wasn’t to talk about Stoudemire, who’s already received plenty of North American coverage. Instead, Goldstein wanted to tell the stories of Fred Campbell, Cory Carr, Deon Thomas and others who were never NBA stars, or even NBA players.

Many of these American players went to Israel begrudgingly, if only to showcase themselves for a bigger contract elsewhere. Many ended up surprising themselves and staying.

That includes Campbell, now 55, who says it took his agent four years from the time his college career ended to convince him to play in Israel. Even then, Campbell only went because his agent promised to fly him back after four days if he hated it.

Within another four years, Campbell had met his wife and chosen to convert to Judaism and become an Israeli citizen. Today, he lives in Netanya with his wife and teenage son, and will be wrapping up his basketball career by playing a final season on the same third-division team as 18-year-old Toi. He’s now lived in Israel for 25 years. 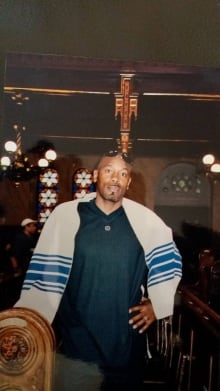 In the four years between college and Israel, Campbell played in a different country each season and figured that trend would continue. But there were a few reasons why it didn’t.

“Everyone speaks English, and you can spend [US] dollars anywhere. The weather is nice. Some of the most beautiful women in the world are right there. But everybody is open-minded, the nightlife is great and, for us, we were like kings,” says Campbell.

The one drawback? Campbell missed his favourite fast food.

“They have McDonalds, Burger King, stuff like that. But for me, [Kentucky Fried Chicken] was my thing and when they left Israel I was so upset… I almost left,” he says.

So Campbell had his mother send him packages of comfort food every so often, which became so popular among his teammates that he began lying and telling them he hadn’t received any more shipments. One time, he slipped up and told the truth.

“I made a big mistake. My mom sent a big box of pop tarts and honey buns and stuff. I let my teammates taste them, the Israeli guys, because they never had them,” says Campbell.

“They went f—ing crazy, coming to my house [saying] ‘You think I can get another tart tart?'” 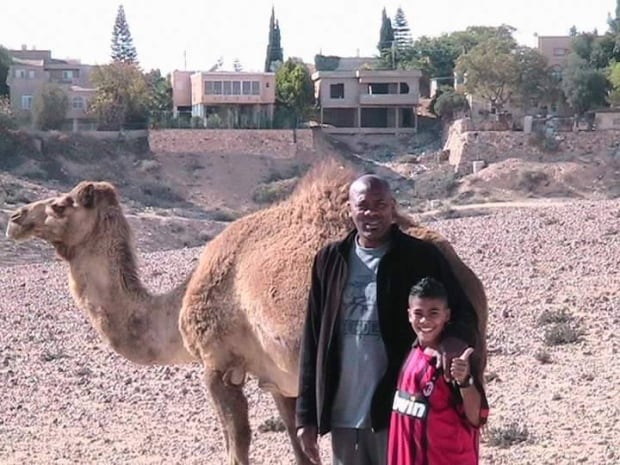 Campbell and his son, Toi, pose in 2013 with a single-hump camel they saw on the side of the road near Arad, a city in southern Israel bordering the Negev and Judean deserts. Now 18, Toi plays on a third-division team with his dad. (Campbell family)

Of course, there was more to Campbell’s decision than beautiful women and good nightlife, as with the others who stayed. In fact, more than 20 of the 800 players who came to Israel eventually converted to Judaism. Many more have stayed and lived as culturally Jewish, but never went forward with the official conversion process.

Many players also told Goldstein that, as African-Americans, they could relate to the struggles of the Israeli people. Campbell sees similarities between the Holocaust, during which more than six million Jews were killed, and the transatlantic slave trade, which resulted in the deaths of millions of Africans.

When you hear about Israel in the news in 2017, it often has to do with Middle East politics. Goldstein says that it’s impossible to separate anything in Israel from politics, including sport. When the players return to the States, they can share their perspective on their adopted home.

“A lot of people in the States, they only know what they see on CNN and, you know, I have to put them in check,” says Campbell. “I don’t just let them say things about Israel. That’s my home and I love Israel and so I find myself defending Israel when I’m in the States.”

The misconceptions extend to the sport Campbell loves. Most Americans don’t know much about Israeli basketball, outside of the occasional pre-season game against an NBA team. There’s been one Israeli first-round pick — Omri Casspi in 2009 — and the country has never impressed in international play.

And yet, players keep coming. And they keep staying.