Fears about Hurricane Florence spread south on Wednesday, with the U.S. state of Georgia declaring a state of emergency after officials in the Carolinas urged people to evacuate the coast ahead of the storm's expected pounding winds and rain-driven floods.

While some planned to stay put — despite hurricane watches and warnings that include the homes of more than 10 million people on the East Coast — many weren't taking any chances.

Florence weakened slightly to a Category 3 storm on a five-step scale but had maximum sustained winds of 195 km/h as of Wednesday evening, down from 210 km/h earlier in the day. Its trajectory showed its centre most likely to strike the southern coast of North Carolina by late Thursday or early Friday, the U.S. National Hurricane Center said.

The storm is expected to slowly weaken by late Thursday, the NHC said, although it's still expected to be extremely dangerous when it nears the U.S.

Jeff Byard of the Federal Emergency Management Agency (FEMA) invoked a former boxing champion to warn residents that Florence would bring "a Mike Tyson punch to the Carolina coast."

"Heed the warnings," said Byard, adding there was "well over $ 20 billion" in FEMA's disaster relief fund. 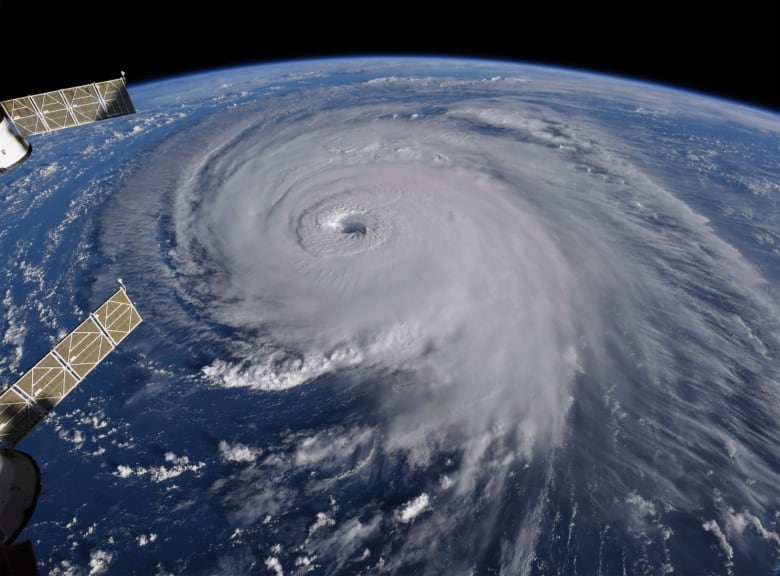 This image provided by NASA shows Hurricane Florence from the International Space Station on Wednesday as it threatens the U.S. East Coast. (NASA via Associated Press)

The National Hurricane Center's projected track had Florence hovering off the southern North Carolina coast from Thursday night until landfall Saturday morning or so, about a day later than previously expected. The track also shifted somewhat south and west, throwing Georgia into peril as Florence moves inland.

Georgia's governor declared a state of emergency for all 159 counties.

'Highly unusual' turn could be in store

In a news release, Gov. Nathan Deal said the state "is mobilizing all available resources to ensure public safety ahead of Hurricane Florence." No storm watches or warnings were in effect for Georgia, but forecasters said there's an increased chance for tropical storm winds.

"It is highly unusual for a storm to turn south down the coast," said CBC meteorologist Johanna Wagstaffe. "Two high pressure systems are blocking Florence from moving inland, but one high-pressure system may be slightly stronger, hence the unusual steering pattern." 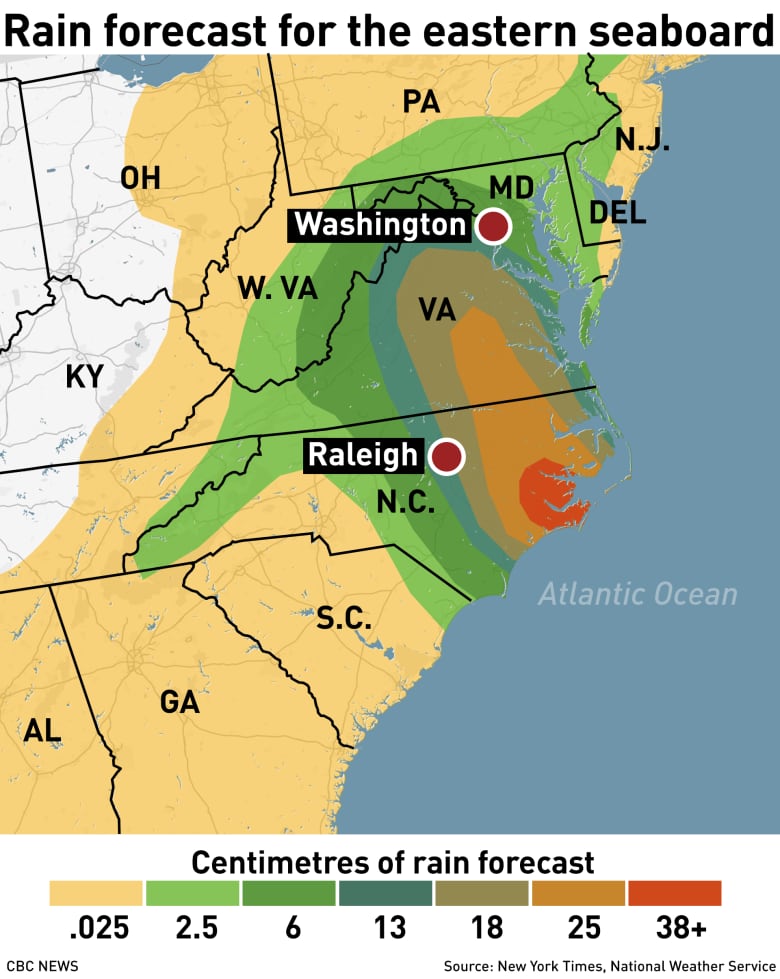 The European hurricane simulation model, which has had a high degree of accuracy in recent years, "is predicting no landfall Friday morning before the turn south, which described as the worst-case scenario.

"Keeping the eye [of the hurricane] over the warm waters means it keeps its strength."

The NHC said the storm is about 675 km east-southeast of Myrtle Beach, South Carolina, as of Wednesday evening.

The Canadian government has warned citizens against travel to the stretch of the U.S. East Coast that is expected to be hammered by Florence.

'Don't play games with this one'

Forecasters said Florence was expected to blow ashore and then slow down and dump 30 to 60 centimetres of rain through at least Sunday, which could cause flooding well inland and wreak environmental havoc by washing over industrial waste sites and hog farms. There are predictions of up to 30 centimetres in places in the Appalachian mountains.

The coastal surge from Florence could leave the eastern tip of North Carolina under more than 2.75 metres of water in spots, projections showed Wrightsville Beach Police officers check identification at the bridge to Wrightsville Beach, N.C., on Wednesday. The island closed to non-residents at 8 a.m, due to the coming storm. (Matt Born/The Star-News via AP)

Donald Trump earlier this week declared a state of emergency for North and South Carolina and Virginia, opening the way for federal aid.

In a video recorded on the White House lawn and sent on his Twitter account early Wednesday, the president expressed confidence in the preparedness of first responders and the Federal Emergency Management Agency (FEMA).

"But despite that," Trump warned, "bad things can happen when you're talking about a storm this size. It's called Mother Nature."

At a news conference Wednesday in Washington, Jeff Byard of FEMA also said it was imperative locals heed the evacuation warnings.

"Today's the day," he said. "It's time for our citizens to be a part of the team. Heed those warnings and evacuate if you're in one of the zones."

Federal officials have urged residents to put together emergency kits and have a plan on where to go, though getting out of harm's way could prove arduous.

For many of those under evacuation orders, getting out of harm's way has proved difficult, as airlines cancelled flights and motorists had a hard time finding gas. 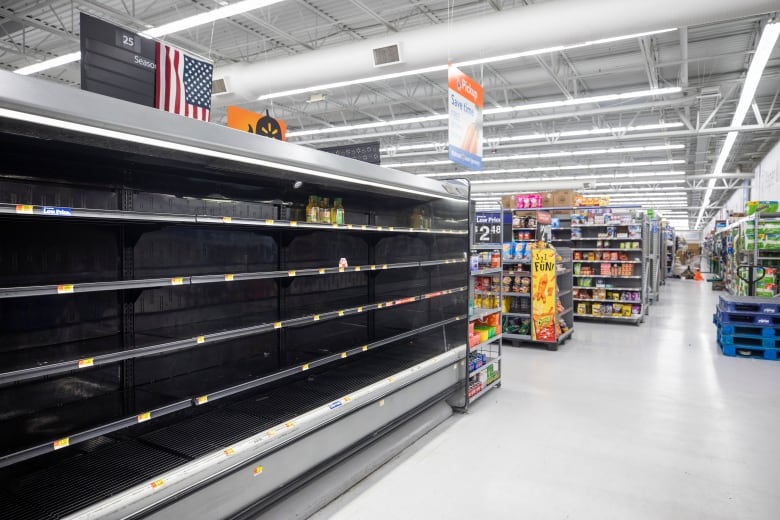 The orange juice aisle at Walmart on Wednesday in Wilmington. (Jim Lo Scalzo/EPA-EFE)

Michelle Stober loaded up valuables on Tuesday at her home on Wrightsville Beach to take back to her primary residence in Cary, N.C. Finding fuel for the journey was tough.

"This morning I drove around for an hour looking for gas in Cary. Everyone was sold out," she said.

Forecasters said parts of North Carolina could get 50 centimetres of rain, if not more, with as much as 25 centimetres elsewhere in the state and in Virginia, parts of Maryland and Washington, D.C.

People across the region rushed to buy bottled water and other supplies, board up their homes, pull their boats out of the water and get out of town. Some store shelves were picked clean.

"There's no water. There's no juices. There's no canned goods," Kristin Harrington said as she shopped at a Walmart in Wilmington.

The region is also home to some of the most well-known military bases in the country, including Camp Lejeune in North
Carolina, Naval Station Norfolk in Virginia and the Marine Corps Recruit Depot on Parris Island in South Carolina. 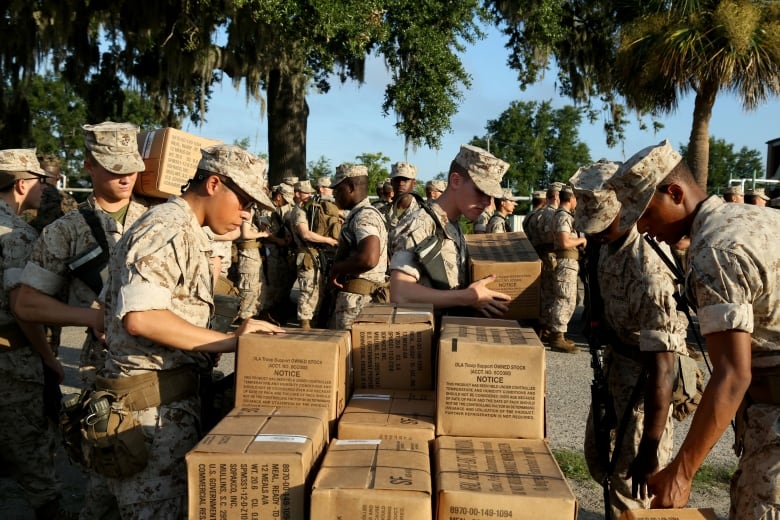 The Navy, Air Force and Army were moving ships and aircraft out of harm's way. Thousands of Marines and their families evacuated from Camp Lejeune, leaving the rest to dig in ahead of what could be a direct hit.

Despite the warning from the state governor and other officials, some residents like 65-year-old Liz Browning Fox plan  to ride the storm out in the Outer Banks village of Buxton, N.C., despite a mandatory evacuation order. Her 88-year-old mother refused to evacuate and Fox will stay with her.

"Everyone who is staying here is either a real old timer, someone who doesn't know where would be better, or someone involved in emergency operations one way or another," she said.