Justin Williams returned to the building that was the scene of his only Game 7 loss and left the ice relieved and redeemed after knocking off his old friends and defending Stanley Cup champions.

The man who earned the “Mr. Game 7” moniker shook Alex Ovechkin’s hand after the Carolina Hurricanes’ stunning 4-3 double-overtime victory over the Washington Capitals and beamed with pride in his upstart team’s latest triumph that added another piece to one of the craziest first rounds in recent NHL history.

Each conference’s top seed, all four division champions and the teams that met in last year’s Cup Final are all out, and the pesky Hurricanes are storming on to face the New York Islanders in the second round.

“You can kick the snot out of each other and look each other in the eye and say, ‘Man that was a great series, you really pushed us,”‘ Williams said. “We pushed each other.”

Brock McGinn scored the winner in the second overtime period to give Carolina the 4-3 win in Washington, sending them to the second round. 2:16

Carolina pushed Washington out of the playoffs by erasing a two-goal deficit and dominating two overtime periods in the third-longest Game 7 in NHL history. Unheralded forward Brock McGinn, who dived to prevent a Capitals goal late in regulation, redirected Williams’ shot past Braden Holtby 11:05 into the second overtime to send his teammates into a wild celebration and the heavily favoured Metropolitan Division champions home early.

The Hurricanes outshot the Capitals 18-6 in the overtimes, and it was clear Ovechkin, Nicklas Backstrom, Evgeny Kuznetsov and the big guns were gassed after each surpassing 30 minutes of ice time.

“Both teams were [tired],” said Ovechkin, who had a series-high nine points. “Players played a lot of minutes.”

The Capitals played a lot of hockey over the past year in winning the first title in franchise history, enduring a midseason seven-game losing streak and still finishing first after 82 games. But they missed an opportunity to close out the Hurricanes in Game 6 on the road Monday, coughed up a lead in the seventh game and bowed out in the first round for the first time since 2013.

It’s the first time in NHL history all four division winners were eliminated in the first round. Unlike Presidents’ Trophy winning Tampa Bay, which got swept, or Western Conference top seed Calgary that got bounced by Colorado in five games, this was right there for the Capitals with a series lead and a two-goal advantage in Game 7 before it slipped away.

“It’s tough right now,” Backstrom said. “It’s tough. Double overtime. Tough one for us. We were up 3-1. Looking back at that, we need to find a way to shut them down there or keep them out of the score sheet there when we got a 3-1 lead. We gave it to them.” 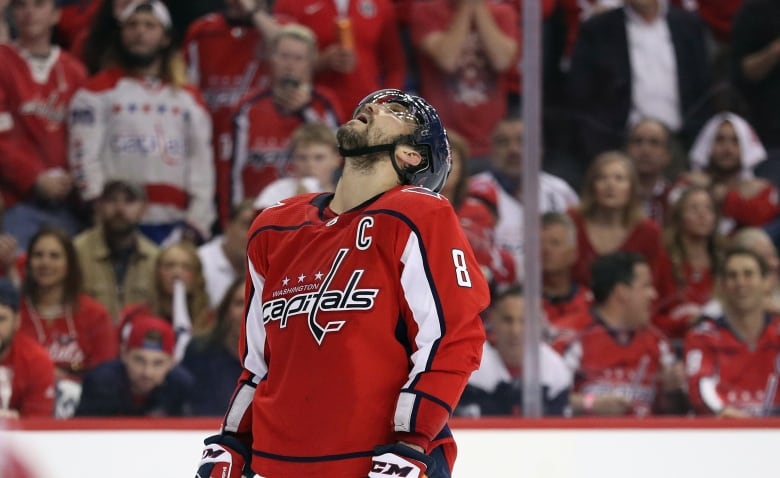 Ovechkin looks skyward after Mrazek stones him on a slap shot from the slot in overtime. (Patrick Smith/Getty Images)

In just as many ways, the Hurricanes took it. Undaunted by an early deficit, they got second-period goals from Sebastian Aho and Teuvo Teravainen and tied it early in the third on Jordan Staal’s third of the series. Petr Mrazek finished off an inconsistent round by stopping 34 of 37 shots and got bailed out by McGinn when he saved a would-be Capitals go-ahead goal with two minutes remaining in the third period.

“It’s just a reaction,” McGinn said. “I don’t know if it had enough steam to cross the line, but I don’t think I was taking that chance.”

In a weird series where the home team won the first six games, there were plenty of chances to end it before McGinn’s goal. Washington’s Jakub Vrana, who was demoted to the fourth line by first-year coach Todd Reirden, hit the post in the second overtime, and the Capitals couldn’t cash in on a power play for a Hurricanes delay of game penalty.

“Every opportunity missed is devastating, really,” Capitals defenceman John Carlson said. “When you don’t do well, it is more than just we were up in the series or the game. It is everything. It hurts.” 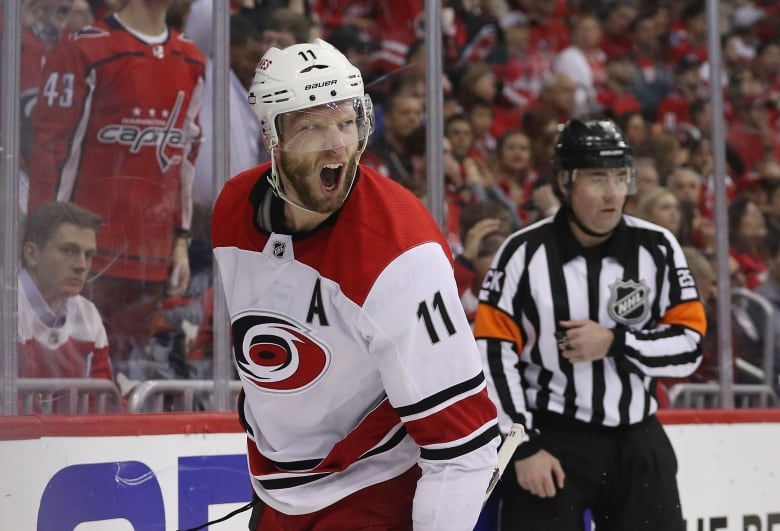 Washington fell to 4-8 in Game 7 in the Ovechkin and Backstrom era and 5-12 all-time, including 3-9 at home. The Capitals had the opportunity to face former coach Barry Trotz’s Islanders in the second round after they swept the Penguins, but now the opportunity belongs to the Hurricanes.

“This is just another step,” said Williams, who is 8-1 in his career in Game 7 with an NHL record 15 points. “It’s wide open for us. It’s wide open for every team. There’s eight left and we’re going to keep pushing to see how good we could be.”

The Capitals joined the Predators and Penguins as teams that all won at least one series each of the past three years but failed to get out of the first round in these playoffs. They were hurt by a season-ending torn left hamstring to defenceman Michal Kempny and a broken collarbone on winger T.J. Oshie, whose appearance in the final minutes of regulation fired up the crowd but wasn’t enough to spark an OT win.