Prince Harry and his wife, Meghan, showed off their newborn son Archie Harrison Mountbatten-Windsor today, and the Duchess of Sussex described having a baby as “magic” two days after the royal birth.

With Harry cradling his son, who was wrapped in a white blanket and wore a white knit cap, the family appeared before a small group of reporters at St. George’s Hall at Windsor Castle in the English county of Berkshire, where the new parents held their wedding reception just under a year ago.

“It’s magic — it’s pretty amazing, and I have the two best guys in the world, so I am really happy,” Meghan said when asked what it’s like to be a new mother.

Meghan said Archie, the seventh in line to the throne, has the sweetest temperament and was sleeping well.

‘He’s just been a dream’

“He’s just been a dream, so it’s been a special couple of days.”

The baby’s name was announced a few hours after his first public appearance.

Watch Harry and Meghan introduce their infant son to the public:

Prince Harry and Meghan, Duchess of Sussex, introduced their newborn son to the public at Windsor Castle. 3:14

Harry and Meghan did not choose an aristocratic title for their son. He is not a prince but could have been given the title “Lord” before his first name.

Instead he will be known for now as “Master Archie Mountbatten-Windsor.”

The surname, used by some members of the royal family, was created to recognize the lineage of both Queen Elizabeth and her husband, Prince Philip.

Unlike many senior royals, Archie only has one middle name. Prince Harry’s full name is Henry Charles Albert David.

The couple did not disclose why they chose his first and middle names — though the meaning of Harrison, “son of Harry,” is probably a clue.

Many in Britain had expected a more traditional royal name, with bookmakers taking many bets on Alexander, Arthur and James.

Archie, a name of Germanic origin with meanings that include “genuine,” “bold” and “brave,” is an increasingly popular baby name in Britain. It was among the top 20 most common boy’s names in 2017, according to the U.K.’s Office for National Statistics.

Royal watchers knew not to expect an immediate public appearance of the baby, as the expectant parents had previously signalled that they intended to spend the first few days together as a family in private.

Tourists visiting Windsor Castle, which is nearby the royal residence outside London that Meghan and Harry moved into last month, mulled over the baby’s name.

Surprise seemed to be the most common reaction.

“A mouthful for him,” Elizabeth Barker, an Irish tourist, said laughing. “But anyway, I guess, if that’s what they wanted, then it’s the name that they like. You know, nobody has to like it.”

A visit with Elizabeth

The couple visited 93-year-old Elizabeth, the world’s longest current reigning monarch, at the castle to allow her to meet her eighth great-grandchild, who is seventh in line to the throne.

Meghan’s mother, Doria Ragland, is staying with the couple at their home Frogmore Cottage, on the castle’s estate. 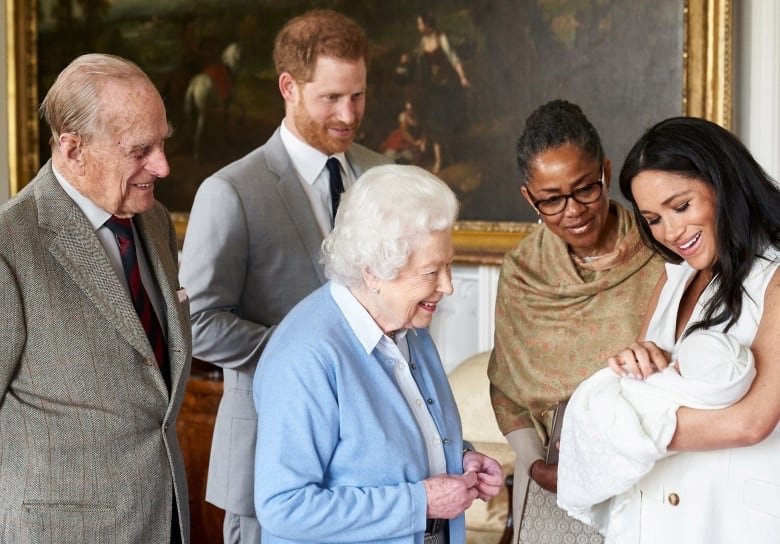 “It will be a nice moment to introduce the baby to more family, and my mom’s with us as well,” Meghan said.

“It’s great, parenting is amazing,” Harry said. “It’s only been 2½ days, three days, but we’re just so thrilled to have our own little bundle of joy, to be able to spend some precious time with him as he slowly starts to grow up.”

See Prince Harry’s joyous announcement after the birth of his first child:

Prince Harry said he’s ‘incredibly proud’ of his wife Meghan after she gave birth to the couple’s first child, a son, on Monday. 1:22

Former Canadian prime minister Jean Chrétien was at Windsor Castle for an event this week and took the time to congratulate the long-serving monarch on the addition to the royal family.

‘Life is good for you, Your Majesty,’ the former prime minister told the Queen after the birth of Prince Harry and Meghan’s first child 0:10

Prince William and Kate spoke to reporters Tuesday, saying they were eager to meet him in the days ahead.

“I’m very pleased, and glad to welcome my brother to the sleep-deprivation society that is parenting.”