When Saskatchewan announced this week it has started covering the cost of a new multiple sclerosis drug, at least 50 people in the province who previously had no Health Canada-approved treatment options were already using it.

Lyle Daniels was one of them.

Daniels was offered the drug, called Ocrevus, for free on a trial basis soon after Health Canada approved it in early 2018.

The drug received much fanfare when its initial trial results were released at a conference in Europe: doctors in the auditorium cheered loudly, recalled Dr. Ilia Poliakov, the clinical director of the Saskatoon MS Clinic, who was at the conference.

So why the applause? Because it was the first drug that had significant results with a type of MS — an unpredictable and debilitating autoimmune disease that affects the brain, spinal cord and optic nerves — that causes irreversible disabilities, called primary progressive MS.

‘Taking that chance to live longer’

However, the warnings that came along with the offer of Ocrevus that Daniels received were dire.

Some who used it in the United States had died, and he was told that the drug essentially wipes out part of the immune system in order to treat MS, which could make him susceptible to serious health issues from something as simple as a common cold.

Those side effects kept Daniels, who lived in Saskatoon at the time, from using Ocrevus when it was first offered.

“Basically what they told us, he would be sacrificing his quality of life for quantity,” Lyle’s wife, Sara, told CBC.

Six months later, Lyle’s health had deteriorated to the point that if he fell, he couldn’t help himself up. He was getting sick all the time, and was frequently in and out of the hospital. His family started worrying that he would die.

“At that rate he wasn’t sure how long he had,” Sara said.

And so they went ahead with the Ocrevus trial. 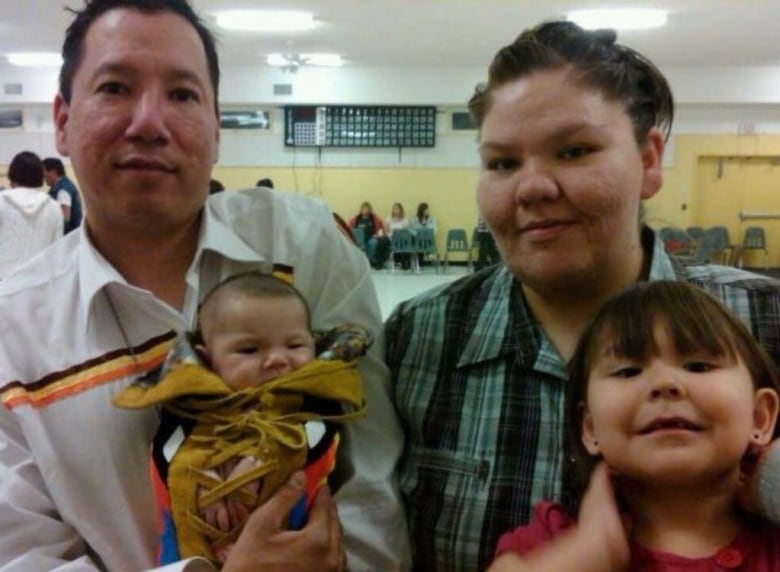 Before MS started wearing down Lyle’s body, he attended events with his family regularly and was able to work physically demanding jobs. (Submitted by Sara Daniels)

The treatment comes in the form of an IV infusion. Two doses are delivered within two weeks, but after that a person only needs to take it once every six months.

With the IV treatment came tears from Sara. The couple has two daughters, one 13 and the other nine.

“I saw how much he was suffering and I kind of felt selfish, in a way, that he was willing to chance suffering even more to be with us. Taking that chance to live longer, but in a worse way,” Sara said.

“I took it for my family and myself,” Lyle said.

It was love that drove Lyle to take the IV drug, and it is love that helps him and his family get used to the new normal that his kind of MS, which will never go into remission, has created for them.

Their MS journey started years ago, long before Lyle was diagnosed.

Where it all began

The first sign that something was wrong was years ago, when Lyle started occasionally losing his vision.

Then he started losing the energy and stamina that used to carry him through 14-hour days as a labourer. He used to paint houses and do construction and roadwork, but he kept losing jobs because he couldn’t keep up.

And then came the tremors, the slurred speech, the agonizing daily headaches.

It happened fast, and Lyle became dependent on his children and wife.

It took two years to find what was causing Lyle’s health to fail. In August of 2017, doctors told him he had an aggressive form of multiple sclerosis called “early primary progressive.” 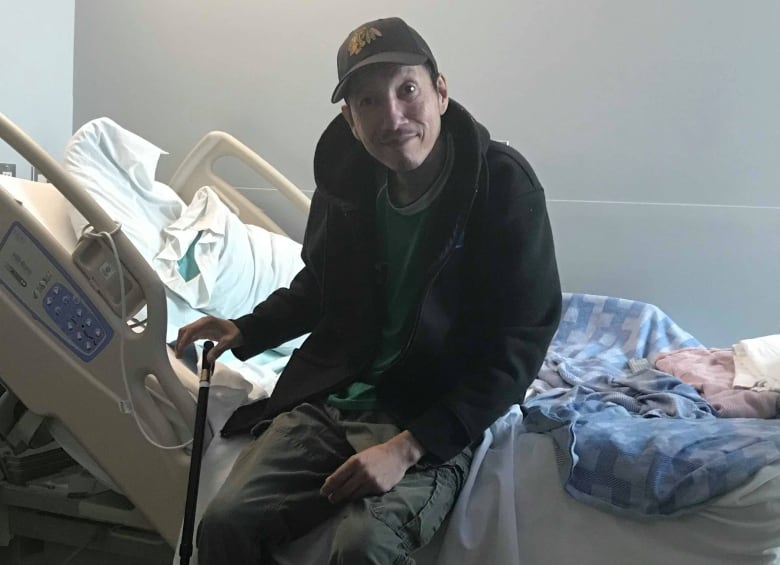 Lyle Daniels’s condition has worsened rapidly over the past four years. (Submitted by Sara Daniels)

Doctors told them that serious brain trauma, which Lyle suffered about four years ago when he was beaten violently by strangers in Saskatoon, had caused his multiple sclerosis to progress rapidly.

Ocrevus, though, should slow down the progression of MS disabilities, said Dr. Poliakov.

“It is not a reversal, nor is it a cure. So patients with progressive MS, they get worse physically, and sometimes cognitively. And this seems to delay that, to a modest amount,” he said.

Since Lyle started on Ocrevus, he can walk a little longer and stay awake a little longer. The progression of his disease has slowed down, but not as much as he thought it would, he said.

The biggest thing, though?

“I don’t feel scared anymore to lose him, or scared that he would have to go to a home,” Sara said. 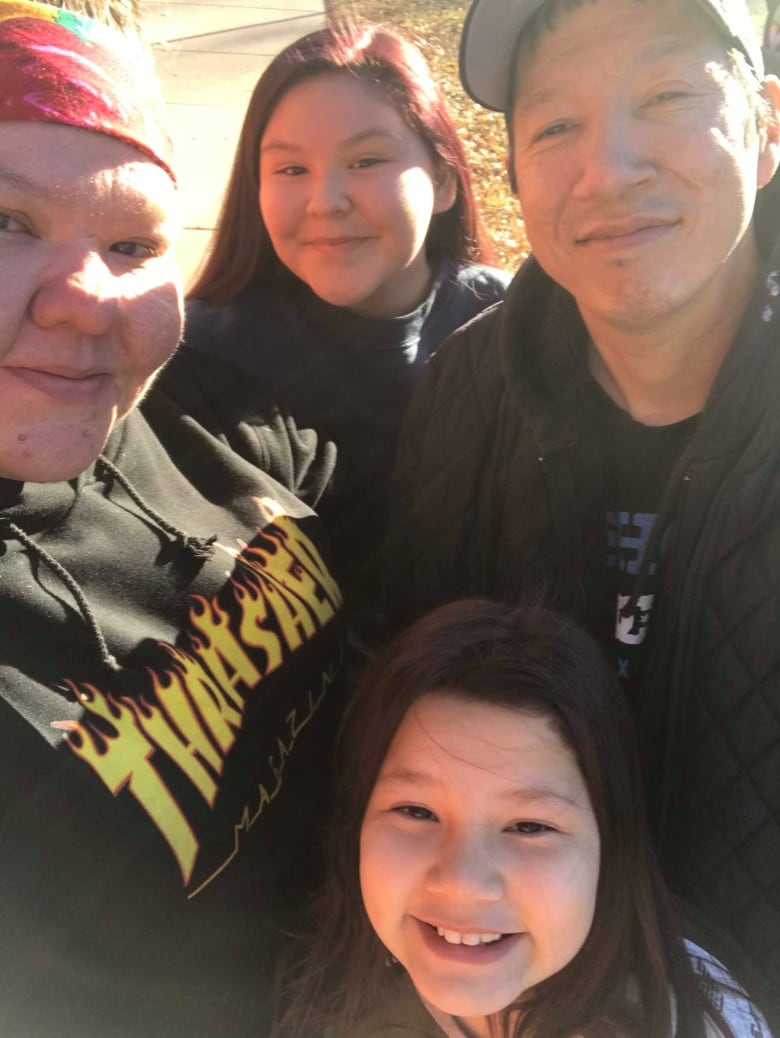 Lyle, Sara and their daughters, Maddison and Kaylee Carriere-Burns, pictured on the day Lyle went for his first Ocrevus treatment. (Submitted by Sara Daniels.)

The family has since moved to Sturgeon Lake First Nation, a reserve about 30 kilometres northwest of Prince Albert.

Sara said she wants to take training for some of his medical needs so that they can live together as long as possible.

“I was thinking of taking home-care classes or something to help keep him with us as long as we can. He’s my love,” she said.

She already helps him work his muscles so that he doesn’t lose them as fast.

“It means a lot to me that they’re helping me. Because without them, I don’t know what I would be,” Lyle said.

Over the years, their daughters have become accustomed to trips to hospital by ambulance — or, if the 55-minute wait is too long, by having Sara and neighbours help carry Lyle to their truck so they can drive there.

They’ve had to get used to people stereotyping them out in public, assuming that Lyle’s slurred speech and struggles to walk means that he is drunk or high. He dealt with that with a tongue-in-cheek shirt. 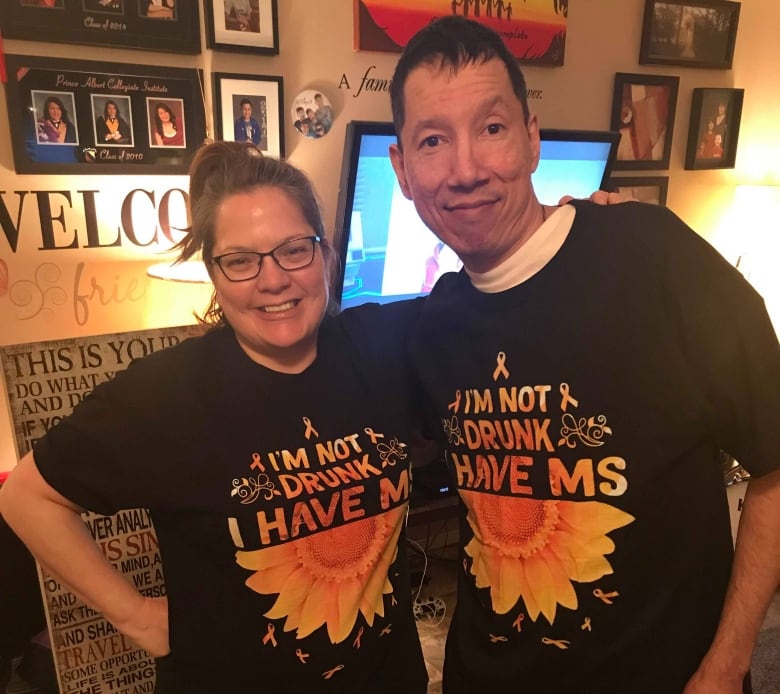 Lisa McDermott and Lyle pose with shirts they had specially made. (Submitted by Sara Daniels)

Good humour can be a challenge, though, when he wants to attend his daughters’ special events or family gatherings and can’t.

“I think he’s still coping with a disease. Every so often he’ll feel like ‘I can’t believe I can’t do this anymore.’ Because he was always going and going, and it just hits him,” Sara said.

As for the provincial coverage of the drug, the couple is relieved that once the free trial is up, Lyle will still be able to access it. Dr. Poliakov estimates the drug would cost between $ 20-$ 30,000 per year if the costs weren’t covered.

Dr. Poliakov said there are still some unknowns with the drug, like how long people can take it — and what kind of long-term impacts come with taking a drug that blocks out part of the immune system (he says other parts of the system tend to pick up the slack for the part that’s blocked, at least initially).

Ocrevus is now considered a front-line medication, not just for the kind of MS Lyle has, but also for the most common kind, called relapsing remitting MS. Dr. Poliakov is pleased about that.

“We want to hit the disease hard. If somebody … has a more mild disease, then we can probably use one of our other first-line medications, which will definitely still have a lot of utility,” he said.

Dr. Poliakov said there is already at least one drug that has received FDA approval in the United States that could help people here with secondary progressive MS, if Health Canada follows suit.

There’s also a study exploring how extremely high doses of biotin may impact people with MS.

For now, Lyle and his family will keep hoping he can make more steps today than the day before.