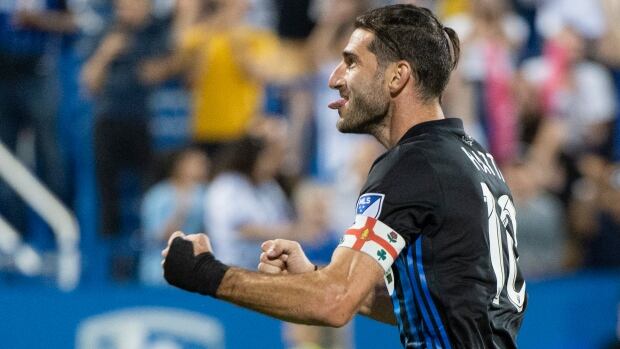 The Montreal Impact advanced to the semifinal of the Canadian Championship with a 1-0 victory over lower-ranked York9 FC in the second leg of the quarter-final on Wednesday.

Montreal won the series 3-2 on aggregate after the teams played to a 2-2 draw in the opening leg two weeks ago.

Ignacio Piatti, in his long-awaited return from injury, scored for the Impact from the penalty spot to snap a five-game winless run for the Major League Soccer club. James Pantemis made one save for the clean sheet.

Goalkeeper Nathan Ingham made six saves for York9 of the Canadian Premier League.

Montreal edged York9 FC 3-2 on aggregate in the second leg of the Canadian Championship quarter-finals. 1:20

Piatti scored the game’s only goal from the penalty spot in the 55th minute, calmly firing into the bottom corner while Ingham dove the wrong way. Piatti earned the penalty himself when his cross into the box hit Diyaeddine Abzi’s arm.

The 14,723 in attendance at Saputo Stadium serenaded Piatti after his goal and gave him a standing ovation when he came off the pitch in the 65th minute. The Argentine was back in the lineup after missing Montreal’s last nine games with a knee injury.

The Impact took no chances against the lower-division club. Knowing a loss at home would be cause for embarrassment, coach Remi Garde played several of his regular MLS starters like Bacary Sagna, Maxi Urruti and Saphir Taider.

Montreal threw everything it could at Ingham. The shots on target were 7-1 for the home team.

Before Piatti broke the deadlock, Ingham kept his side in the match with several big saves. The 26-year-old made a diving stop to keep Urruti’s volley out of the top corner in the 31st minute. Eight minutes later, Ingham denied Taider from a free kick.

In the 50th minute, Ingham made a commanding save on Clement Bahiya from six yards out before stopping Taider again on a fast break in the 53rd.

It could have been ugly for the Impact, who nearly conceded eight minutes into the game. York forward Ryan Telfer made a run past Impact defenders, skipped around a charging Pantemis outside the penalty area before narrowly missing a wide open net.

The Ottawa Fury advanced to the semifinal of the Canadian Championship with a 2-2 draw against HFX Wanderers FC in the second leg of the quarterfinal on Wednesday.

Ottawa won the series 5-4 on aggregate after winning the first leg 3-2.

The Fury got goals from Christiano Francois and Onua Obasi to move on.

The Fury’s 2-2 draw versus Wanderers FC gave them a 5-4 win on aggregate in the Canadian Championship quarter-finals. 1:47

The Wanderers came in needing to win by two, or score at least three goals to advance, and got off to a strong start.

They took a 2-0 lead in the first half and went into the second half up 2-1, but in the 66th minute Francois got just enough toe on the ball to get it past HFX ‘keeper Jan-Michael Williams to tie the game.

Calgary’s Cavalry FC pulled off an upset Wednesday night, beating the Vancouver Whitecaps 2-1 to advance to the Canadian Championship semifinals.

Cavalry are the only Canadian Premier League team to take out a Major League Soccer squad in the tournament.

Goalie Marco Carducci stopped two of three on-target shots for the Cavalry. Vancouver ‘keeper Maxime Crepeau had one save.

The loss extends the Whitecaps’ dismal winless stretch to 10 games across all competition, including five straight losses in MLS.

Earlier this month, they battled Calgary to a scoreless draw in the first leg of the qualifying round.

Calgary will now face the Montreal Impact of the MLS in the semifinals starting on Aug. 7.