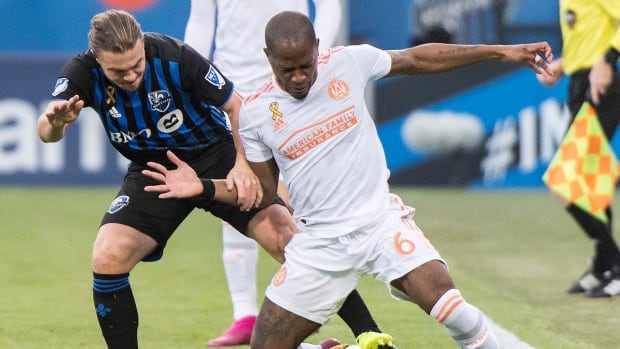 Coach Wilmer Cabrera believes the Montreal Impact’s lack of offensive talent cost them a spot in the MLS playoffs.

The Impact (11-17-5) were officially eliminated from post-season contention following a 1-1 draw against defending champions Atlanta United (17-12-4) on Sunday evening.

Even with a victory, Montreal would have been knocked out of the playoff race following New England’s 2-0 win over New York City FC. The Revolution clinched the seventh and final spot in the Eastern Conference.

The Impact have now missed the playoffs in three straight years.

“For me, if you ask me why we didn’t qualify for the playoffs, we lack the possibilities to finish off the quality plays that we create,” said Cabrera, who dropped to 1-4-1 as Impact coach. “The last touch, the last shot, the last moment, the last pass is where we missed that possibility where you have to make the difference.

“We have a very talented team, but if you compare to Atlanta individually, they have more talent than us.”

The Impact extended their winless streak to four games in MLS and fell to 2-10-2 over the last three months.

The lack of goal-scoring has plagued the team throughout the ongoing slump and it was no different against Atlanta. The Impact have scored five goals in their last six games.

Bojan netted the only goal for Montreal in the 81st minute after Julian Gressel gave Atlanta the lead in the 53rd.

“It’s not good because we didn’t make the playoffs,” said Bojan, the former Barcelona midfielder. “But we had a good performance today against a strong team. We tried everything. After today’s game, we have many things to think about. But we have to be happy with the way we played today.”

Goalkeeper Clement Diop made five saves in his MLS debut for Montreal — an end-of-season revelation for the Impact. Evan Bush was on the bench for the first time since the end of the 2017 season — a streak of 66 consecutive league matches.

“We’re disappointed. We believed in ourselves until the very end,” said Diop, who was told Saturday he would get the start. “Obviously, on a personal side, I’m happy when I get to play. Like any competitor, I always want to play. I work hard every day with [goalkeeper coach] Remy Vercoutre and the other goalkeepers.”

The stars were aligned for Montreal, which did not have to face injured Atlanta striker Josef Martinez (knee). Martinez leads United with 26 goals this season.

But Cabrera’s men failed to capitalize.

The Impact nearly took the lead in the 37th minute when Daniel Lovitz crossed the ball into the box to Ignacio Piatti. The Argentine laid the ball off to Saphir Taider, whose low shot was turned away by Brad Guzan.

Too little, too late

Early in the second half, the speedy Lassi Lappalainen broke away from an Atlanta defender and moved in alone on Guzan. The Finnish winger’s first touch was too heavy as he approached goal and the chance was wasted.

Gressel made the home team pay for the missed opportunities in the 53rd. The 25-year-old blew past defender Rod Fanni, passed the ball to Emerson Hyndman who back-heeled it right back, and fired past Diop for his fifth of the season.

“We played compact and a little bit deeper when we had to,” said Atlanta coach Frank de Boer. “We pressed them when we had to. We could have deserved more. Of course, when you’re so close to three points and you see the results of the other games, it’s quite bitter to only get one point.”

The Impact pressed for the equalizer and got it in the 81st. Orji Okwonkwo avoided a slide out wide, cut towards the box and squared the ball to Bojan for his second goal in an Impact uniform.

It was Montreal’s first goal at Saputo Stadium in MLS in 314 minutes of play, dating back to Aug. 28 against the Vancouver Whitecaps.

But it was all too late for the Impact, who could not carry over the momentum from their midweek Voyageurs Cup victory over Toronto FC.

Notes: It was the fifth game in 16 days for both teams. ΓÇª Montreal’s last game of the season is at home against the New York Red Bulls next week.