Indonesian President Joko Widodo ordered more rescuers to be sent in to find victims of a devastating earthquake and tsunami on Tuesday as the official death toll rose above 1,200 and looting raised fears of growing lawlessness.

Most of the dead have been from the small city of Palu, 1,500 kilometres northeast of Jakarta, but some remote areas have been cut off since Friday's 7.5 magnitude quake triggered tsunami waves, leading to fears the toll could soar.

"There are some main priorities that we must tackle and the first is to evacuate, find and save victims who've not yet been found," Widodo told a government meeting to co-ordinate disaster recovery efforts on the west coast of Sulawesi island.

See the devastation on Sulawesi island:

He said he had ordered the national search and rescue agency to send more police and soldiers into the affected districts, some cut off by destroyed roads, landslides and downed bridges.

The Red Cross said the situation was "nightmarish" and reports from its workers venturing into one cut-off area, Donggala, a region of 300,000 people north of Palu and close to the epicentre, indicated it had been hit "extremely hard."

Four badly hit districts have a combined population of about 1.4 million.

In Palu, tsunami waves as high as six metres smashed into the beachfront, while hotels and shopping malls collapsed in ruins and some neighbourhoods were swallowed up by ground liquefaction.

Among those killed were 34 children at a Christian bible study camp, a Red Cross official said. 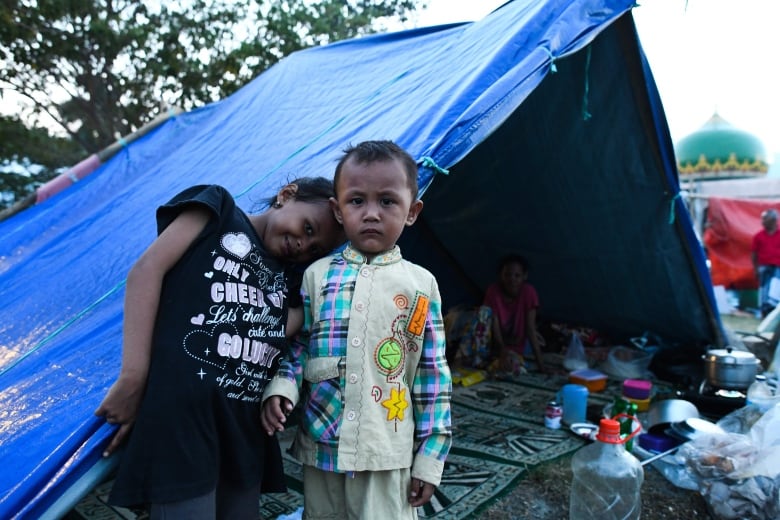 A makeshift camp has been set up in a field near a mosque in Palu. Desperation was evident across Palu, a city of more than 380,000 people that was hard-hit by both the twin disasters that struck the inlet. (Jewel Samad/AFP/Getty Images)

The government has ordered aid supplies to be airlifted in but there's little sign of help on Palu's shattered streets and survivors appeared increasingly desperate.

A Reuters news team saw a shop cleared by about 100 people, shouting, scrambling and fighting each other for items including clothes, toiletries, blankets and water.

Many people grabbed diapers while one man clutched a rice cooker as he headed for the door. Non-essential goods were scattered on the floor amid shards of broken glass.

At least 20 police were at the scene but did not intervene. The government has played down fears of looting saying disaster victims could take essential goods and shops would be compensated later.

It's OK if he's buried in the mass grave, it's better to have him buried fast.– Local resident Rosmawati Binti Yahya ,  speaking about her late husband

Indonesia is all too familiar with earthquakes and tsunamis. A quake in 2004 triggered a tsunami across the Indian Ocean that killed 226,000 people in 13 countries, including more than 120,000 in Indonesia.

It has said it would accept offers of international aid, having shunned outside help earlier this year when an earthquake struck the island of Lombok.

Rescuers in Palu held out hope they could still save lives.

"We suspect there are still some survivors trapped inside," the head of one rescue team, Agus Haryono, told Reuters at the collapsed seven-story Hotel Roa Roa.

About 50 people were believed to have been caught inside the hotel when it was brought down. About nine bodies have been recovered from the ruins and three rescued alive. 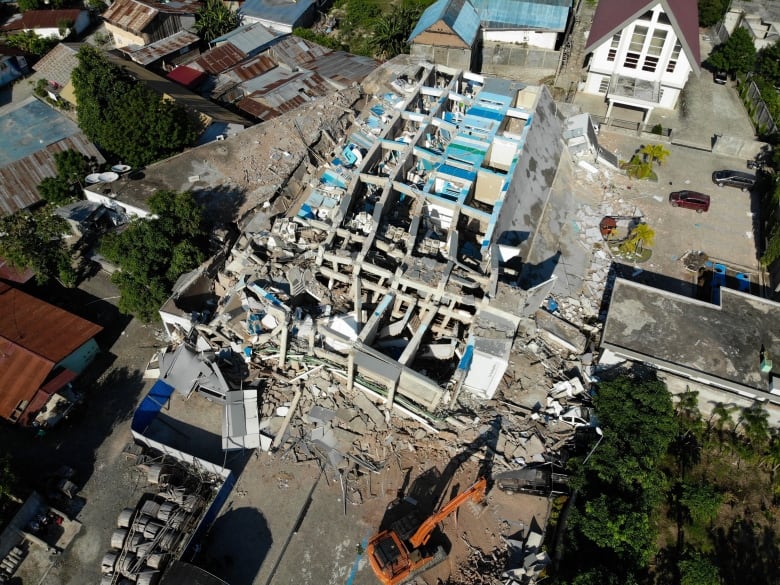 An earth remover works to clear debris from the collapsed Roa Roa hotel in Palu. Dozens are believed to be trapped inside. (Jewel Samad/AFP/Getty Images)

Haryono pored over the hotel's blueprints, searching for possible pockets and a way through to them. A faint smell of decomposition hung in the air.

Power has yet to be restored and aftershocks have rattled jangled nerves.

A particular horror in several areas in and around Palu was liquefaction, which happens when soil shaken by an earthquake behaves like a liquid.

About 1,700 houses in one neighborhood were swallowed up, with hundreds of people believed buried, the national disaster agency said.

Elsewhere, on the outskirts of Palu, lorries brought 54 bodies to a mass grave dug in sandy soil.

Most of the bodies had not been claimed, a policeman said, but some relatives turned up to pay respects to loved ones at the 50-metre trench, where the smell of decomposition was overpowering.

"It's OK if he's buried in the mass grave, it's better to have him buried fast," said Rosmawati Binti Yahya, 52, whose husband was among those placed in the grave, before heading off to look for her missing daughter. 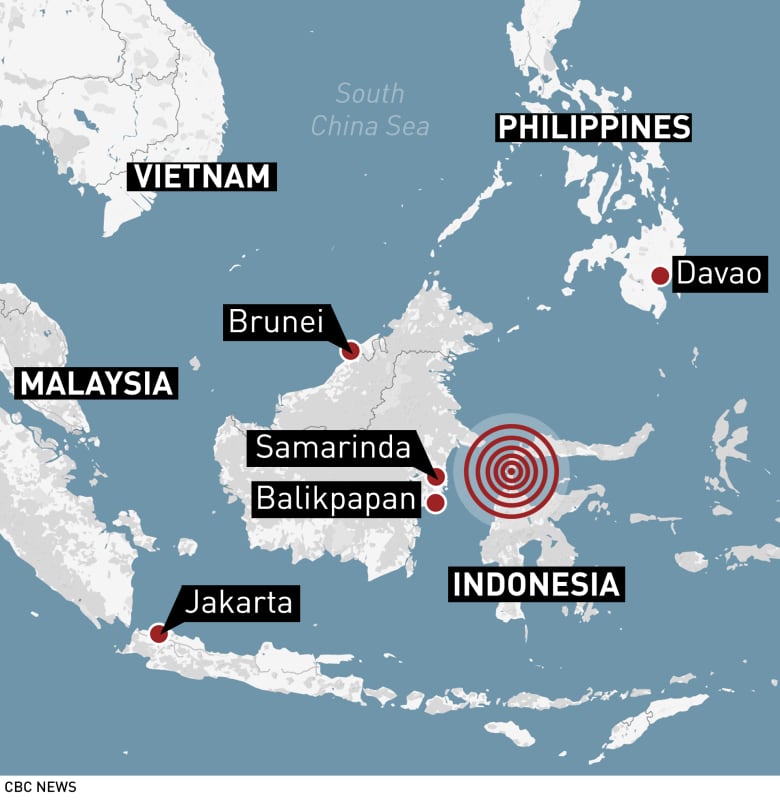 More than 65,000 homes were damaged and more than 60,000 people have been displaced and are in need of emergency help, while thousands have been streaming out of stricken areas.

Commercial airlines have struggled to restore operations at Palu's damaged airport but military aircraft have taken some survivors out.

But thousands of people have been thronging the airport hoping for any flight out, and authorities have said a navy vessel capable of taking 1,000 people at a time would be deployed to help with evacuation efforts.

Sulawesi is one of Indonesia's five main islands.