Forced to play most of the season away from home and suffering from an injury-ravaged lineup, Toronto FC coach Greg Vanney blew a gasket Wednesday.

Not at his banged-up team, which he defended in the wake of a 1-0 loss to New York City FC, but when he was reminded by a reporter that his team, thumped 5-0 in Philadelphia on the weekend, had not scored in two games.

Normally the picture of patience, the 46-year-old Vanney let loose.

“Guys, guys,” said Vanney, whose expression fortunately was hidden behind a mask. “Honestly we’re scoreless in two games, we’re trying to manufacture opportunities. The core of our attacking group is not healthy. We’re working hard as a group.

“We didn’t put out the effort and get the representation of ourselves that we wanted in Philadelphia. That was evident. We lift our hand, we say we weren’t there on that night. That happened. We’re allowed that over the course of 19 games and the crap that we’re going through. We’re allowed to have a bad night. We had a bad night. So end it.

“Tonight the guys worked their asses off. They fought, they competed, they battled. It wasn’t perfect. It was never going to be perfect, OK? We had chances, we didn’t finish the chances. Our chances tonight, most of them went to our left back [Justin Morrow playing in a more advanced midfield role] … That’s where we are right now.”

There weren’t in the wake of an 82-second tirade. It wasn’t exactly Bobby Knight but Vanney’s growing heat showed a degree of frustration rarely exhibited since taking over the team in August 2014. 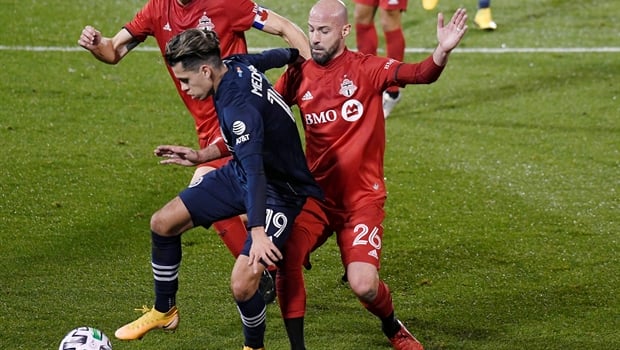 The post-game virtual meeting with reporters ended before anyone could remind him that Toronto (12-4-5) has been outshot 42-10 (18-1 in shots on target) over its last two games — which followed a nine-game unbeaten run (7-0-2).

Jesus Medina’s second-half goal was enough to lift NYCFC (10-8-3) past Toronto on the night. It marked the first loss in five outings (3-1-1) for Toronto at Pratt and Whitney Stadium at Rentschler Field, its pandemic home away from home.

Most of the injuries are not that serious. But Vanney does not want to bring back key players too early for fear of aggravating the problem.

Altidore and Piatti may not be back before the playoffs.

The lopsided loss to Philadelphia dropped Toronto behind the Union on goal difference in the Supporters’ Shield race. Philadelphia moved three points ahead after beating Chicago 2-1 Wednesday.

The big picture shows Toronto standing second in the 26-team league. This week’s snapshot shows a bump in the road.

Still, NYCFC should have won by more. It had plenty of chances but lacked clinical finishing. At the other end, New York ‘keeper Sean Johnson should have brought a magazine to the game with Toronto not credited with a shot on target.

The New Yorkers had 64 percent of possession in the first half Wednesday, coming at Toronto in waves. But they failed to turn that into goals despite some unconvincing Toronto defending.

NYCFC managed just one shot on target in the first half which ended with Toronto’s Nick DeLeon hammering a shot off the NYFC goalpost from just outside the penalty box in stoppage time.

But too often, Toronto players were caught chasing the NYCFC attack.

The breakthrough came in the 51st minute when Quentin Westberg could not hold onto a swerving Valentin Castellanos shot and Medina was first to the rebound to knock it in. The Toronto defence had backed off Castellanos before he took the shot from outside the penalty box.

Toronto pushed forward as the second half wound down but rarely looked convincing until the final minutes when New York had closed up shop and substitutes Jayden Nelson, Ralph Priso, Jacob Shaffelburg and Tsubasa Endoh added some life to the party.

Defender Maxime Chanot and Castellanos returned from suspension for NYCFC. Libyan forward Ismael Tajouri-Shradi was out after announcing on social media that he has tested positive for COVID-19.

Castellanos has six shots, including four on target, for NYCFC, which eventually ended with 15 shots including six on target.

Asked about how his team limited Toronto playmaker Alejandro Pozuelo, the Norwegian repeated what he had said before the game about the Spanish MVP contender who has feasted on the New Yorkers in the past.

“I haven’t used a lot of energy on him, to be honest,” said Deila. “That’s not my focus. As I said before the game, he’s a good player but he’s not [Lionel] Messi.”

Pozuelo did not have a shot on the night, although he had a few well-aimed passes.

TFC hosts Inter Miami on Sunday in East Hartford in a game that will feature a limited number of spectators. Toronto finishes out the regular season Nov. 8 at the New York Red Bulls.