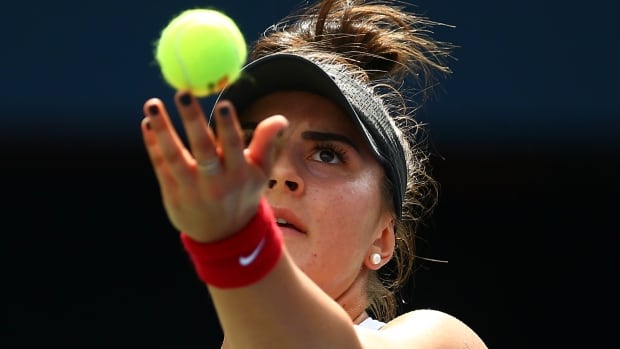 This is an online version of CBC Sports’ daily newsletter, The Buzzer. Sign up here to get it delivered directly to your inbox every weekday.

OK, here’s what you need to know right now from the world of sports:

The 19-year-old captured her second title of the year Sunday by winning the women’s Rogers Cup in Toronto. Sure, the ending was anticlimactic: the great Serena Williams quit less than 20 minutes into the match due to a back injury (Andreescu led the first set 3-1 at the time). But this is a big deal. Andreescu, who’s from Mississauga, Ont., is the first Canadian to win this tournament since Faye Urban in 1969. It was called the Canadian Open back then, in the pre-sponsorship days.

The Rogers Cup isn’t quite on the same level as the very prestigious Indian Wells event Andreescu won back in March. But it’s close. If we throw out the Women’s Tennis Association Finals — a quirky tournament for only the top eight players in the world at the end of the year — then the Rogers Cup is in the third-highest tier of events. The four Grand Slams are at the top, then the four so-called Premier Mandatory tournaments (Indian Wells is one of these), then the Premier 5 (the Rogers Cup is one of these). The big difference between a Premier Mandatory and a Premier 5 is prize money: Andreescu earned about $ 1.35 million US for winning Indian Wells, and $ 521,000 for the Rogers Cup. They’re a lot closer when it comes to rankings points: a Premier Mandatory tournament winner gets 1,000 while a Premier 5 champ gets 900 (a Slam title is worth 2,000). More points and more prize money means more of the best players show up. Eight of the world’s current top 10 were in Toronto.

It’s stunning how far Andreescu has come in such a short time. Her Rogers Cup victory vaulted her 13 spots to No. 14 in the world. That makes her the highest-ranked Canadian tennis player right now (Milos Raonic and Felix Auger-Aliassime are the top men at No. 20 and 21, respectively). At this time last year, Andreescu was ranked 209th in the world. She finished the 2018 season 178th. But Andreescu has been a new player in 2019: her record is 38-4 and she’s won more than $ 2.2 million US in prize money (her previous career winnings were about $ 216K). She’s now a perfect 7-0 vs. opponents ranked in the top 10. All this despite a shoulder injury that limited her to one match in the four months before the Rogers Cup. If you don’t count the matches the shoulder injury forced her to retire from, Andreescu has now won 17 in a row.

It’s too soon to go here, but Andreescu is on track to become Canada’s most accomplished tennis player ever. With all due respect to Daniel Nestor’s eight Grand Slam doubles titles, we’re going to stick to singles here. Doubles just doesn’t carry anywhere close to the same weight. With that in mind, Andreescu’s Indian Wells victory was the biggest title ever won by a Canadian tennis player. And her Rogers Cup is at least as good as the biggest of Raonic’s eight titles on the men’s tour — the 2014 Citi Open in Washington, D.C. In terms of peak rankings, Raonic is still the gold standard for Canadians. He reached No. 3 in 2016, when he won the most recent of his titles and got to the Wimbledon final and the Australian Open semis. Genie Bouchard has the Canadian women’s high. She hit No. 5 in 2014, when she reached the final at Wimbledon and the semis in two other Slams, and won her first (and still only) WTA title. She’s now No. 112, which seems like a cautionary tale. Bouchard’s and Raonic’s climbs up the rankings, and the level of stardom they’ve achieved, are a testament to how much strong performances in the Grand Slams matter.

Now Andreescu finally gets a real chance to make her mark in a Slam. The U.S. Open starts two weeks from today in New York City. For the first time since she hit her stride, Andreescu should be healthy for a major. She was bothered by a groin injury at the Rogers Cup, so she’s wisely skipping this week’s tournament. Lesson learned, maybe: Andreescu’s shoulder bothered her during her run to the Indian Wells title, but she was back on the court four days later for another tournament. After a few matches, the shoulder gave out and she was gone for months. She tried to play in the French Open and even won her opening match — a testament to her toughness — but then had to withdraw. Then she missed Wimbledon altogether. Back in January, Andreescu played her way into the Australian Open as a qualifier. She lost in the second round. Her only other Grand Slam appearance came in 2017, when she lost in the first round at Wimbledon. Read about how Andreescu and her “old soul” caught the eye of Serena Williams here.

Rafael Nadal won the men’s Rogers Cup in Montreal. The world’s No. 2 player annihilated Daniil Medvedev 6-3, 6-0 to win the tournament for the second year in a row and fifth time in his career. Ivan Lendl holds the record with six. Nadal now has 83 titles and has won more than $ 111 million US in prize money in singles and doubles. Read more about Nadal’s Rogers Cup win here.

Two Canadians are moving on to the next round of the PGA playoffs. After finishing tied for 21st in the first playoff tournament (the Northern Trust), Corey Conners is 27th in the season-long standings. Adam Hadwin is 51st. So they both qualify for this week’s tournament (the BMW Championship), which is for the top 70 golfers in the season standings. After that, only the top 30 advance to the playoff finale. Canadians Roger Sloan (No. 93), Mackenzie Hughes (98) and Nick Taylor (120) were eliminated after the Northern Trust. American Brooks Koepka is still ranked No. 1, and Patrick Reed moved up to No. 2 by winning the Northern Trust. Tiger Woods dropped to 38th after quitting the tournament after the first round because of an oblique injury. Read more about Reed’s win here, and read our explainer on golf’s playoff system here.

A B.C. team will represent Canada at the Little League World Series again. Make it 14 times in the last 15 years after a squad from Coquitlam beat Quebec 6-3 in the national championship game. Matthew “Beef Dip” Shanley (yes, his actual nickname) made like a young Babe Ruth, pitching almost five no-hit innings with 13 strikeouts and hitting a two-run homer. The Little League World Series starts on Thursday in Williamsport, Pa. Canada’s first game is Friday at 6 p.m. ET vs. Mexico. Read more about B.C.’s win in the Canadian championship and watch highlights here.

Canada finished fourth in the medal standings at the Pan Am Games. They go by gold medals, and Canada’s 35 were behind the United States (120), Brazil (55) and Mexico (37). Canada had the third-most total medals, though, with 152. Canada’s flag-bearer for the closing ceremony in Peru was Ellie Black, who won five medals. Canadians also clinched seven spots for next year’s Tokyo Olympics in various sports. Read about how the Canadian team hopes the Pan Am Games were a launching pad for the 2020 Olympics here.

It’s an unhappy anniversary for Canadian baseball fans. On this day 25 years ago, major leaguers went on strike to fight the owners’ demand for a salary cap. It went on so long that the rest of the season and even the World Series were cancelled. The saddest part? When the strike began, the Montreal Expos had the best record in the entire majors. With stars like Pedro Martinez, Moises Alou and Canadian Larry Walker, the Expos had legitimate championship hopes. But, starting with the strike, it all fell apart. Montreal wasn’t as good the next year, and pretty soon the low-budget team let its star players go. Attendance fell, and in 2004 the Expos played their last season in Montreal before moving to Washington, D.C. Read more about the Expos-killing strike and watch a report from the CBC Archives here.

Enjoy this piece? Get more writing like this sent to your inbox every weekday by signing up for The Buzzer below.