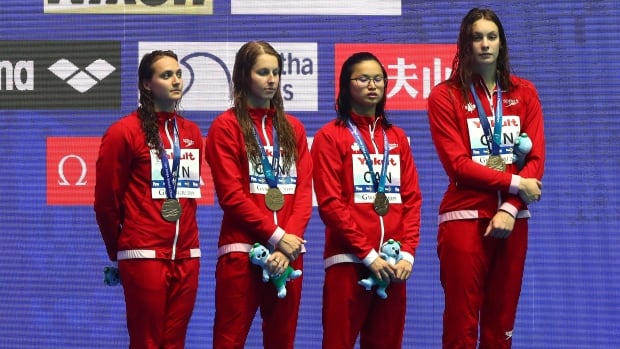 In less than four years, Canada’s women’s swimming team has gone from a curiosity to one of the things to be most excited about at next summer’s Tokyo Olympics.

The rise of this collection of athletes is remarkable. It seems that with each passing event, more records are broken and more stars emerge.

At the 2016 Rio Olympics, the world discovered Penny Oleksiak, who became the first Canadian athlete to win four Olympic medals at a single Summer Games. She also became the youngest Canadian to capture Olympic gold.

In 2017, Kylie Masse became the first Canadian woman to win a swimming world title (the 100-metre backstroke) and also broke a world record.

Taylor Ruck emerged a year later, tying an individual Commonwealth Games record by hauling in eight medals. Last summer, Ruck became the first Canadian to win five individual medals at a single Pan Pacific Championships — one of the most important competitions on the swimming calendar.

It doesn’t stop there. At the recently completed swimming world championships in Gwangju, South Korea, Canada women won eight medals. That’s a national record — even if you include the men’s medals won at previous worlds. Masse defended her 100 backstroke title, while little-known Maggie MacNeil added her place in history by stunning the world to capture the 100 butterfly. Masse and Sydney Pickrem became the first Canadian women to win three individual world-championship medals in their careers.

In an interview with CBC Sports, John Atkinson, Canada’s high-performance director and national coach, said he appreciates all the enthusiasm the Canadian women have generated and how expectations for Tokyo will reach a fever pitch. He’s what else Atkinson had to say:

CBC Sports: The women’s team has continued to amaze. Have these athletes exceeded your expectations and what are you thoughts on their overall performance?

John Atkinson: We came to the 2019 FINA world championships knowing the women’s team has been improving year on year since the 2017 world championships, and through last year’s Commonwealth Games and Pan Pacific championships. You can only control your own performances and not worry about what other swimmers and teams are doing. It was pleasing to see our athletes winning individual medals and also encouraging to see our women’s relay teams win medals for the first time ever in three relays (4×100 freestyle, 4×200 freestyle and 4×100 medley). We are very happy with the performances of this group of women. Now it’s time to re-focus straight away and not get carried away with ourselves and be ready for the Swimming Canada Olympic Trials that will be in April next year in Toronto.

CBC Sports: We all know about Penny, Kylie, Taylor and Sydney, but nobody — at least from the outside — saw Maggie coming. Was gold even a surprise to you?

Atkinson: It is a great group of athletes and the key is enabling all of them to perform to their very best at the same time in Tokyo. With Maggie we have seen her develop over a number of years in her club program in London, Ont., with coach Andrew Craven. She has competed on our junior teams and done camps, and last year she actually qualified for the Senior Pan Pacific Championships in Tokyo. Maggie, however, explained her plan was to get school work done [at the University of Michigan], and attend the Junior Pan Pacs in Fiji and we supported this. Maggie went on to win the Junior Pan Pacs so we saw her progression. The 2019 world championship trials gave a clear indication of what she was capable of, and by qualifying for the world championships in the 100 butterfly we felt she was in a great place to progress further in Korea. You can never know how much improvement is possible, however, based on her improvement rates we certainly could see a medal was possible. However, the gold medal and the time achieved was ahead of our expectations, but what it does do is show all team members anything is possible within the environment and culture we have on the team.

CBC Sports: Are we witnessing the “golden age” of women’s swimming?

Atkinson: I am not sure to what extent it’s a golden age of women’s swimming in Canada. However, with the talent on the team it’s certainly close to being something very special. Their age and their performance are making things very exciting right now and into the future.

CBC Sports: Is this team on its way to becoming the greatest in Canadian history?

Atkinson: Well, as far as swimming goes they are the most successful already: eight medals in a world championships, all in Olympic events, and with two of the medals being gold it shows this. However, we are still talking of improvement and what each athlete needs to do to be even better.

CBC Sports: The team came out of nowhere to capture six medals in Rio. Should we expect an even bigger medal haul in Tokyo?

Atkinson: History shows that the Olympic Games are the toughest event every four years, and that every Games gets faster, and at every Games new swimmers break through. Some swimmers from the FISU Games, Pan Am Games and/or world junior championships will also be in the mix come Tokyo 2020. I would not put a figure on medals for next year, but I will say we will strive to be at our best for the first day of the pool swimming at the Olympic Games and all the way through to Day 9. We are not unknown now, and people are watching. This is a different kind of pressure with more expectation and that is what makes for a different challenge from Rio. However, we will be in the quest for medals and focused — as we are every year — on improvement, doing all the small things to the very best of our ability. If this gets us into the medal zone that’s great.