Students at the University of Toronto say they know one of their fellow classmates took his own life on campus over the weekend.

Only the school itself won't say the word "suicide" out loud.

"It's been U of T's recent trend to kind of not acknowledge and address the suicides that take place," said Shobhit Singh, a second-year electrical and computer engineering student.

Singh was among dozens of students who stood outside Simcoe Hall, which houses the office of the president, to grieve the death of one of their own and call for action after a string of suicides they say have gone unacknowledged over the past year.

"I think this is possibly the third or the fourth time since last year since this sort of incident has happened. And I think we've had enough," said Singh.

Inside, dozens more sat on the floor, lining the hallway with signs in hand, hoping their protest would prompt some acknowledgment by the school of the tragedy and the need for urgent change.

"We want to send a very clear message that we are hoping for open dialogue between the president and the U of T student body in order to enact sweeping mental health reforms," said first-year student Oliver Daniel. 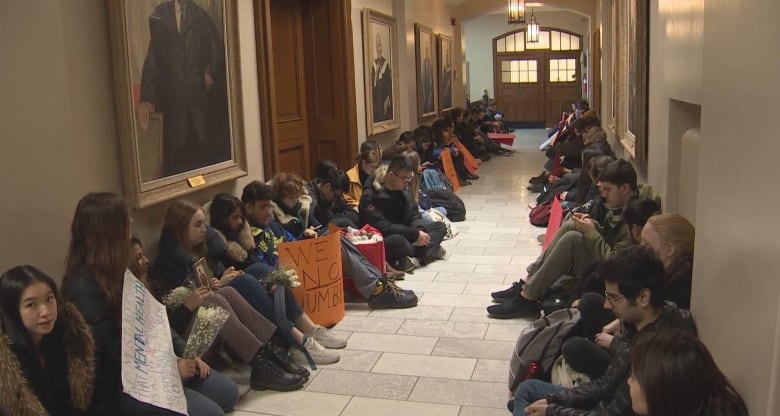 Students say wait times to access counselling can often be about a month long, with the number of appointments capped to about a handful.  (Mehrdad Nazarahari/CBC)

Sheila Rasouli, a third-year neuroscience student, said she has written to senior administration officials, calling for 21 changes to the system, including:

Toronto police confirm they were called to the university Saturday at 8:40 p.m. ET. Officers on the scene did not deem the death to be suspicious in nature and don't believe any criminality was involved, Const. Allyson Douglas-Cook told CBC News.

In a tweet Monday, the University of Toronto acknowledged something had happened, citing "the recent incident at the Bahen Centre," directing students to its campus services and various on- and off-campus crisis lines.

Members of our community may have been affected by the recent incident at the Bahen Centre. At this time, we wish to respect the privacy of the individual involved and acknowledge the profound effect on family, friends and colleagues. (1/5)

Hao knew the student who died — and knows all too well the toll taken by mental-health issues if left unchecked. He felt compelled to share his story with CBC Toronto in the hope of bringing light to a problem he says too many are silent about. 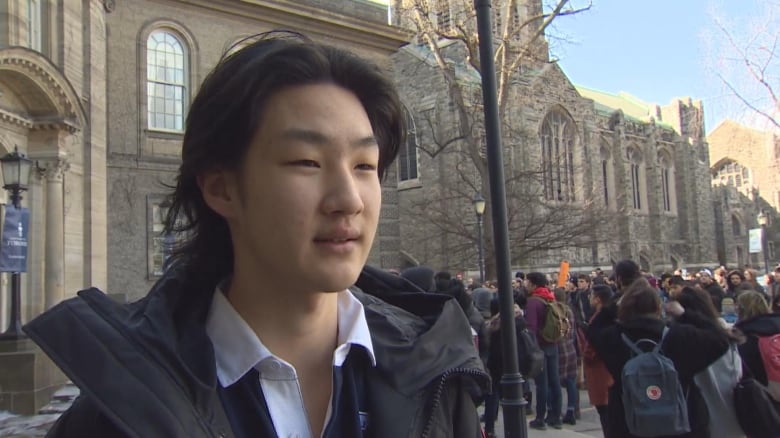 "I've been dealing with depression and anxiety since Grade 10. It was fine, then it was really bad, then it was fine again. But ultimately during Grade 12 exams, I had to go see a doctor to keep myself medically safe, just to make sure I didn't do anything rash … Because suicidal thoughts were there."

We hear from a U of T student who participated in a protest yesterday calling for better mental health support for students. He lost a friend over the weekend to a suicide on campus. 7:50
Still, he said, when he arrived at the university, he didn’t know where to turn for help. It wasn’t until he found himself consumed by stress in a moment of crisis, sitting on St. George Street at 2 a.m. in shorts and a hoodie, that he came to know about the resources available.
But even then, said Hao, “You feel so discouraged to try to contact anyone, because it just seems like an office with a phone number, an email, a fax line — it doesn’t feel human.”

They ask, how could this could happen at U of T? Throughout my undergrad, I: <br><br>- had a medical note get rejected by my prof for not “looking sick” <br>- was almost put on involuntary leave <br>- was told I reached my max number of visits at health and wellness <br><br>That’s how.

Beyond that, said students, the wait time for counselling can often be about a month, with the number of appointments capped to about a handful.

Also irksome to students: a mandated leave policy approved just under a year ago, for students at risk of harm to themselves or others where mental health may be involved — something the university has said is "not meant to be punitive."

'It's never going to be enough'

Janine Robb, the school's executive director of health and wellness, said she couldn't confirm either a suicide or a death, but the family involved requested the details be kept private.

“Something happened on campus,” she said, adding only it was “tragic incident,” and the university is working to try to fast track access to wellness services for who may have witnessed it or who are affected. 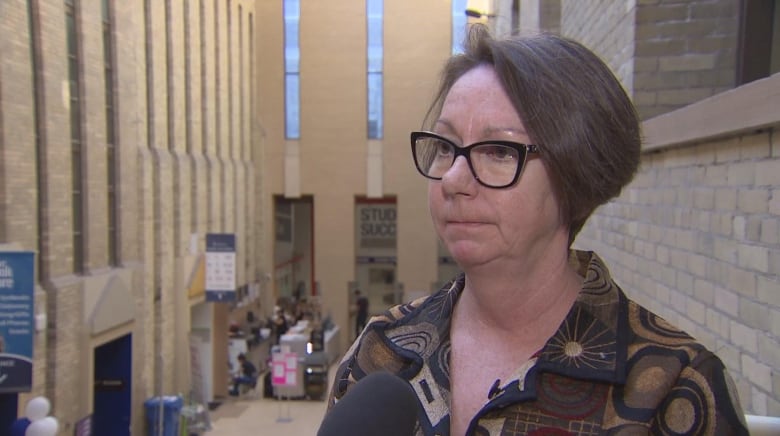 Janine Robb, University of Toronto executive director of health and wellness, says she can't confirm a suicide or a death happened on campus, but the family involved requested the details be kept private. (Yanjun Li/CBC)

Asked to comment on students' concerns about a lack of available resources, Robb said she hadn't heard exactly what the concerns are, but believes the university's approach needs to be proactive rather than reactive.

“We can continue to throw counsellors, psychiatrists, medical doctors at this issue, and it’s never going to be enough,” she said.

"We've got to skills build, we've got to give them opportunities to develop better coping strategies. They need to be more connected with others on campus."

But Hao believes until the problem of student suicides is brought out into the open, it will only grow.

Despite talking to the student who took his life only a few days earlier, Hao said he simply couldn't tell he was struggling.

"This subject is so not talked about, so taboo, that it really could be somebody living down the hall.

If you're worried someone you know may be at risk of suicide, you should talk to them, says the Canadian Association for Suicide Prevention. Here are some warning signs: