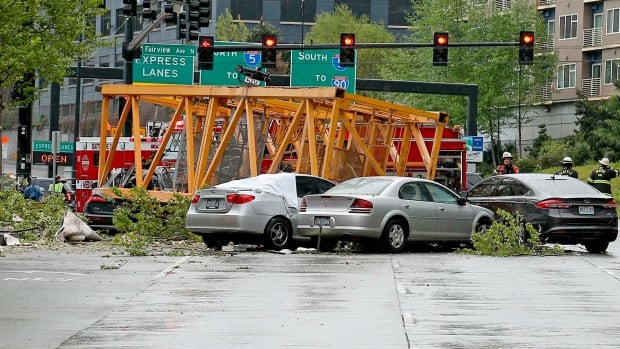 The four were dead by the time firefighters got to the scene, Fire Chief Harold Scoggins said. Three people — including a mother and her baby — were transported to the hospital, he said. A fourth person was injured but treated at the scene.

The crane collapsed near the intersection of Mercer Street and Fairview Avenue near Interstate 5 shortly after 3 p.m. local time.

Scoggins said officials do not yet know the cause of the collapse, which happened on a busy street.

“My thoughts and prayers are with those killed and injured,” Seattle Mayor Jenny Durkan said on Twitter.

The crane was atop an office building under construction in a densely populated area.

“It was terrifying,” Esther Nelson, a biotech researcher who was working in a building nearby, told The Seattle Times.

“The wind was blowing really strong,” she said, and added that the crane appeared to break in half.

The incident at Fairview Ave N and involved a crane that fell into traffic. 5 cars were crushed. There are a total of 4 fatalities, and 3 injured patients that have been transferred to the hospital. <a href=”https://t.co/HM3PBZ5Udt”>pic.twitter.com/HM3PBZ5Udt</a>

Scoggins said all the injured were taken to Harborview Medical Center.

A 28-year-old man, a 25-year-old mother and her baby were being treated, said Susan Gregg, a spokesperson for Harborview. None of their injuries are life threatening, she said.