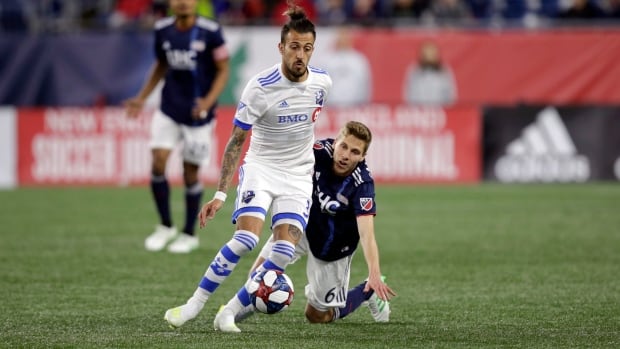 Anthony Jackson-Hamel recorded his first two goals of the season, and the Montreal Impact scored twice over a six-minute stretch late in the second half to beat the New England Revolution 3-0 on Wednesday night at Foxborough, Mass.

Despite poor weather conditions delaying the Impact’s arrival to the New England area until Wednesday afternoon, the visitors played like the fresher team, especially in the first half. However, it was during the second half when Montreal (4-3-2, 14 points) finally came through to win for the second time in three matches.

Shamit Shome scored in the 79th minute on a rebound of a misplayed free-kick save off the hands of New England keeper Cody Cropper. On 85 minutes, Jackson-Hamel added some insurance for the Impact with his first of the season. he then recorded the brace to cap off some nifty dribbling in the third minute of stoppage time.

For New England (2-6-1), it was the third loss in four games. The Revolution have managed one goal during that stretch.

Montreal was the aggressor from the start. Zachary Brault-Guillard had a straight-on chance in the 11th minute, but Cropper made the save, and quickly another on the rebound from Michael Azira.

In the 19th minute, the Impact’s Orji Okwonkwo hit the crossbar with a right-footed smash from the left side. Then, on 42 minutes, Cropper made a diving save on a Max Urruti’s bending attempt off a free kick.

Anthony Jackson-Hamel scores a brace as Montreal blanks New England 3-0 on the road. 1:35

Early in the second half, it was Michael Mancienne who provided the Revolution with their best scoring chance of the match. However, his header off a corner missed just right of the goal on 53 minutes.

New England certainly showed more fight than it displayed in the first half to wake up the sparse crowd at times. In the 65th minute, the Revolution’s Juan Agudelo had a header nick the top of the crossbar off another quality corner chance.

In the end, though, New England failed to convert, while Montreal was finally rewarded for its spirited effort.