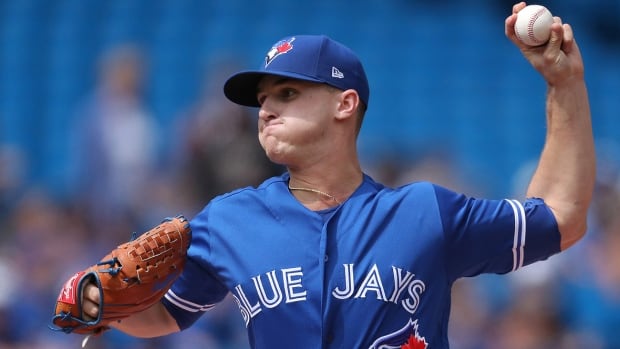 Thomas Pannone realized early that he was cruising through innings and keeping Baltimore's hitters off-balance in his first major league start.

But a sixth-inning defensive gem from Randal Grichuk — who dove for an Austin Wynns liner in centre field and kept the ball in his glove while bouncing to the turf — really got the rookie thinking about just how good his outing could be.

"You look at every no-hitter or perfect game that's been thrown, there's always that one play that's just like: 'oh my god, that play was amazing.' So I thought: 'maybe that's it,"' Pannone said with a smile after taking a no-hitter into the seventh inning of the Toronto Blue Jays' 6-0 win over the visiting Orioles on Wednesday.

Pannone (1-0) allowed just one hit while striking out three and walking two in a 108-pitch, seven-inning performance.

He lost his no-hit bid when Trey Mancini singled to lead off the seventh on his 91st pitch of the game, an 81 mile-per-hour changeup.

The 24-year-old left-hander nearly lost the shutout in the same frame, putting runners on second and third with no outs — thanks in part to an error from Teoscar Hernandez in left field — but the rookie got out of the jam with two ground balls and a pop out and walked off the mound to a loud ovation from the 40,595 in attendance for the afternoon start.

"That last jam he was in, he was getting a little tired, sitting there with no outs," manager John Gibbons said. "We'd seen him a couple times in relief but I didn't expect that.

Pannone, starting in place of the injured Marcus Stroman (blister), had appeared in four games in relief for Toronto this season, posting a 4.15 earned-run average since being called up from triple-A Buffalo earlier this month.

He said having those major league innings under his belt helped calm his nerves before Wednesday's start.

"I got to get my feet wet for four innings or so. So yeah, it made it easier today to go out there and pitch," Pannone said. "But I haven't made a start in a couple weeks so just to go back to that whole routine of warming up and the bullpen and everything like that, it was great."

Travis' homer was his 34th as a Blue Jay, tying Orlando Hudson for third all-time by a second baseman on the on the franchise list. Aaron Hill is first with 90.

Richard Urena had an RBI double and Danny Jansen scored on a wild pitch earlier in the eighth and Kendrys Morales snapped the scoreless tie in the seventh with a solo homer, helping Toronto (58-69) improve to 12-1 against the Orioles (37-90) this year. The Jays are 10-31 against the rest of the AL East.

Morales, who extended his hit streak to seven games with a 2-for-4 afternoon, has homered in four consecutive contests.

"He's been a productive hitter his whole career," Gibbons said. "He really regrouped after that slow start and he's been steady. But he's a good hitter. Always has been. And he stayed with it."

Ryan Tepera and Joe Biagini pitched the eighth and ninth, respectively, to preserve the shutout.

Baltimore starter David Hess (3-7) shouldered the loss despite a solid start of his own. He allowed three hits and one run while striking out seven over seven innings.

Hess did not allow a base-runner over the first four frames. A Morales leadoff single in the fifth spoiled his perfect stat line.